Now That It’s Over, CNN Praises Sussmann Verdict: He Won ‘Fairly and Squarely'

Now that the trial involving Hillary Clinton lawyer Michael Sussmann is over, having reached an acquittal, outlets like CNN are suddenly excited to spike the football. On Tuesday night, Don Lemon and guests cheered the verdict as won “fairly and squarely.” They also derided “partisan folks” who watch such trials in bad faith.

They featured CNN senior legal analyst Preet Bharara to pontificate on the Sussmann verdict. The lawyer was first taken to trial during the prior Trump administration on the basis of lying to the FBI in 2016 on behalf of Hillary Clinton; according to John Durham, Sussmann lied in a meeting in which “he passed a tip to the FBI about Donald Trump and Russia.”

Lemon stated that the past three years have been filled with Durham “looking for wrongdoing in the Trump-Russia probe,” as if lying to the FBI is not wrongdoing.

Instead of covering the trial, how Sussmann was discharged, and the general reaction of the American public, Lemon and Bharara spoke of regular people, “partisan people,” and the idea that when they “follow trials, they don’t really follow them in good faith.”

“Look, I think my perspective as a lawyer and someone who used to be a prosecutor, is when partisan folks follow trials, they don't really follow them in good faith. They often don't follow them at all. They want a result to be had at the end of the case, lock him up, lock her up, whoever the case may be. And then they cry foul at the end of the case if it's not the outcome that they want. It’s very ironic.”

What’s ironic is someone on CNN crying foul about “partisan folks.” 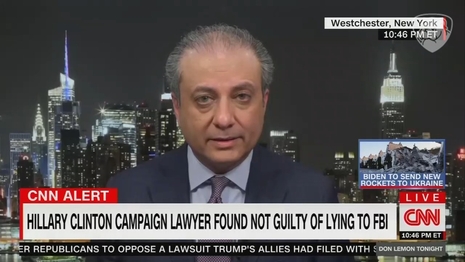 Bharara continued by referencing a conversation he had previously with Lemon about a recent speech where Justice Clarence Thomas talked about people accepting outcomes that they don’t like. Stating that this is exactly one of those times, even though the trial was done “fairly and squarely” with a jury made up of Washington D.C. constituents.

“I think, not too long ago you and I were talking about Clarence Thomas giving a speech talking about how people should accept outcomes that they don't like. Well, this is another example of an outcome and it was done fairly and squarely, a jury in Washington, D.C. And a lot of people who are in the party on the side of the ideological spectrum that Justice Thomas is on, don't abide the outcome.”

Fox News host and former Trump spokesperson Kayleigh McEnany explained that “the D.C. jury pool, this is an area of the country where 76 percent of people in the District of Columbia are registered Democrats. Believing that the jury did not “buy what Durham was selling,” she feeds right into what the left thinks.

On the other hand defense attorneys Sean Berkowitz and Michael Bosworth seemed to view this more as a political scheme, stating that the verdict of today, what Sussmann was charged with sends an “unmistakable message” to everyone who cares, “politics has no place in our system of justice.”

Lemon stated that this was just one of the trials that “turned out to be nothing,” possibly a conspiracy theory, one that “the right-wing media makes such a big deal out of them and it turns out to be nothing.”

Would it be the same way if the jury had ruled against Michael Sussmann? Or would CNN “cry foul” about the verdict?

This segment is sponsored by Macy's and Motel 6. Their contact information is linked.

DON LEMON: The investigation of the investigators coming up empty today that after the first trial of Special Counsel John Durham's investigation. He spent three years looking for wrongdoing in the Trump-Russia probe and today Hillary Clinton campaign lawyer Michael Sussmann was acquitted of lying to the FBI. Joining me now, CNN senior legal analyst Preet Bharara.

Preet, good to see you. Thanks for joining.

PREET BHARARA: Good to see you.

LEMON: So, this is the first trial in the Durham investigation which has gone on now, like I said, for three years and cost millions of dollars. What do they have to show for it at this point?

BHARARA: Well, not much. You know, I've overseen trials where the result was not what I wanted when I was United States attorney. In this case it looks like it was thin. It looks like the jury didn't take a very long period of time to determine that the right result was an acquittal, six or seven hours at the most, after a trial that went on for some days.

It seems like there was a hard road for the government to plow with respect to showing that there was a false statement made and probably even more importantly in this case based on the facts as I understand them. It was very difficult for them to prove beyond a reasonable doubt that the misstatement, or the false statement that was alleged to have been made was material, in any way. In other words, did it derail the investigation, did it cause investigators do something differently from what they otherwise would have done?

What I would like to note about this, by the way, is the Durham investigation was begun by and sanctioned by prior administration, Donald Trump and his attorney general, Bill Barr, and what I think it notable, is that I haven’t heard a lot of talk about in the last couple days and certainly today with the conviction, I mean the acquittal, is that he was allowed to go forward, continue his investigation even though there were a lot of critics, on the Democratic side, on the pro-Biden side, saying this was a witch hunt, language that we’ve  heard used by the other side.

And he was allowed to continue his investigation and see it to its conclusion with respect to Michael Sussmann and a jury spoke, and I think John Durham said the right things, and I think we may sometimes disagree with the results of juries but we respect what the jury’s verdict was and we move on.

LEMON: Yeah. But it’s interesting because we've had so many of these, right,  that turned out to be nothing, right, even a lot of conspiracy theories, right-wing media makes such a big deal out of them and then it turns out to be nothing and then they don't talk about it again, as if it didn't happen.

BHARARA: Yeah, I don't know how the other network is covering this because they have been breathlessly reporting about this because they thought it was a big bombshell and it was the first step in leading towards a further inquiry and maybe another investigation of Hillary Clinton.

Look, I think my perspective as a lawyer and someone who used to be a prosecutor, is when partisan folks follow trials, they don't really follow them in good faith. They often don't follow them at all. They want a result to be had at the end of the case, lock him up, lock her up, whoever the case may be and then they cry foul at the end of the case if it's not the outcome that they want, it’s very ironic.

I think not too long ago you and I were talking about Clarence Thomas giving a speech talking about how people should accept outcomes that they don't like. Well, this is another example of an outcome and it was done fairly and squarely and a jury in Washington, D.C. And a lot of party who are in the party on the side of the ideological spectrum that Justice Thomas is on, don't abide the outcome.

If it's good for one side, it should be good for the other side as well.

LEMON: Well, let's start with the Supreme Court.  That’s where the investigation – the search – They’re investigating that search of the source of that leaked draft opinion that would overturn Roe V. Wade, asking folks to turn over their phone records. How rare is that and what does it tell you about the investigation? Anything?

BHARARA: Well, this this is like many things that you and I have discussed over the past couple of years. The response to something we describe as being unprecedented and highly unusual, never happened before. I'm not aware of any time ever in history, even since the advent of cell phones, you didn't have that a hundred years ago, where people have been asked, who worked for the court, to give over that private information.

But, it's also true that's in response to something that is unprecedented and has never happened before, namely the leak of a draft opinion. So I understand the response, I get it. I'm not sure how effective it will be. You know, among other things, they can only make those requests of people at the court, they can't really legally under the law effectively make those requests of the people who published the report.

The easiest thing to do would be to ask the political reporters who had the bylines, “who gave you this information?” case closed. You can’t do that because they wouldn't comply because there is a reporter’s privilege recognized in many jurisdictions.

It's also the case if it was a clerk or some employee of the court who engaged in this conduct- everyone who works at the court, staff and the lawyers both are really, really smart lawyers. It's probably the hardest legal job to get in the United States of America to be in a position to clerk for a justice of the Supreme Court. So, they’re not dumb. And if they chose to do something that has never been done in the history of the court, you would imagine they would be fairly clever and willy about it and there would not be an electronic record. They would not have emailed it to a reporter or texted it to a reporter.

My understanding is that there were about 75 people who were privy to the draft opinion, many of whom had actual hard copy versions of it. And it's a much easier matter to read to someone, a reporter or to provide to someone a copy of the opinion. That leaves no electronic trail. I think it's an unnerving thing for people who are employed by the court. I don't know if it will bear any fruit.

LEMON: We’ll see. We heard some of the clerks are so concerned that they're hiring lawyers, Preet. Thank you, appreciate that.