On Friday, CNN’s Brianna Keilar and her Republican-loathing colleague, Brian Stelter, took turns bashing their competitor, Fox News Channel, for the crime of allowing  the expression of conservative thought. Abandoning even the pretense of being objective journalists, the two left-wing hosts condemned Fox executives and hosts for actually pledging to practice adversarial journalism and hold the new administration accountable. 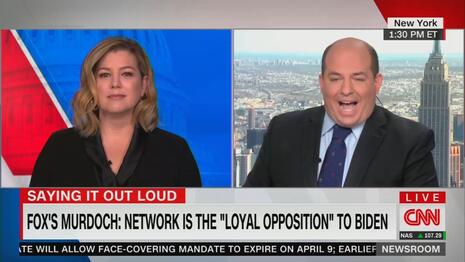 Seemingly unaware that they work for one of the most liberal broadcast companies in the world, Stelter and Keilar audaciously derided Fox’s level of objectivity. Keilar began the awkward, Fox-obsessed segment by mocking the network’s coverage of former President Trump — whom she referred to as the network’s former “de facto executive producer.” Before introducing Stelter, Keilar played a series of selectively edited clips of Fox News Channel’s Tucker Carlson. The clips, many of which were taken completely out of context, depict Carlson reporting on topics that were critical of, then-candidate and now, President Biden.

Keilar quoted a statement that Fox’s CEO, Lachlan Murdoch, said to a group of investors when he was describing the current state of Fox’s ratings:

Based on the quote that Keilar read aloud, it’s obvious that Murdoch’s decision is predicated on ratings — not politics.

Eager to rip on Fox, Stelter — literally sitting on the edge of his seat — began by slamming Carlson for purportedly having a close relationship with Murdoch. Stelter then claimed that FNC was becoming the “Tucker Carlson channel,” given the ratings dominance of Tucker Carlson Tonight.

Stelter, apparently forgetting who his employer is, then denounced Fox as a “propagandist machine”:

“So, this is all a ratings ploy. And it is very clear from the programming and the sources inside Fox who are speaking out about it. It is notable that Lachlan was speaking to investors saying, hey, the ratings are going to come back, the viewers are going to come home. And, to some extent, that's starting to become true. But this is all about business, it’s all about profit. I think when people want to understand how this propaganda machine works, and when it doesn't work, ultimately, it's about Rupert and Lachlan Murdoch and how much money they can make from all of this.”

The Reliable Sources host concluded the segment by expressing his optimism in the fact that Murdoch’s more liberal son, James, may one day try to “come in and try to take over,” Fox News Channel. If that ever happens, he said, it “would be a kind of HBO-drama worthy moment.”

It’s also worth noting that, during the 2020 presidential campaign, CNN’s President, Jeff Zucker, was recorded saying that his staff shouldn’t “normalize” Trump’s behavior or rhetoric leading up to Election Day. Zucker also alluded that his employees should ignore stories that were unfavorable to Biden, such as the Hunter Biden laptop story that broke in the latter portion of the summer.

Competition is ubiquitous in virtually every industry — especially, cable news. However, it is extremely hypocritical for Keilar and Stelter to pretend as if their own network (CNN) doesn’t deliberately promulgate a far-left agenda. Before taking to the air to mock another network's journalistic standards, Keilar and Stelter should remember who signs their paychecks.

The blatant hypocrisy and lack of self-awareness displayed by both Stelter and Keilar was brought to you, in part, by T-Mobile. Contact this advertiser and other via the Conservatives Fight Back page, conveniently linked here.

BRIANNA KEILAR: Fox, facing a ratings slump after its de facto executive producer lost the presidential election, is leaning even more heavily into its buffet of cultural-war cuisine. I know it's about as predictable as someone singing "Girls Just Want to Have Fun" really badly on karaoke night. And it’s predictably hypocritical to boot. Case in point, back in June, this guy promised to do better.

TUCKER CARLSON [06/30/2020]: Middle class families are the core of this country. They are the hope for the future, our only hope. And yet both parties have shamelessly abandoned them. Republicans pretend to be their champion. You know now that they are not. Instead of improving the lives of their voters, the party feeds them a steady diet of mindless, symbolic victories, partisan junk food designed to make them feel full even as they waste away. It is lunacy. We fall for it every time. And to the extent this show has participated in it, we apologize with deepest sincerity.

TUCKER CARLSON [03/02/2021] So, it’s Dr. Seuss’ birthday. The Biden administration is refusing to celebrate. We are celebrating and we will tell you why, precisely. Which other holidays will they be cancelling? Obviously, July 4th will be first on the list.

TUCKER CARLSON [07/02/2020]: So why are people attacking Columbus' statues? Well, who knows? You're definitely not allowed to ask.

TUCKER CARLSON [06/29/2020]: So, have any of you eaten python? Some have! The python cowboy joins us next to explain. […] I mean, it goes without saying, it tastes like chicken so I’m not even going to ask you, but tell me how hard it is to hunt a python and how dangerous.

TUCKER CARLSON [02/19/2021]: And, of course, the curricula, in so many schools, has taken a much harder edge since that time—from the extreme left wing to the outright totalitarian.

TUCKER CARLSON [02/16/2021]: No, ladies and gentlemen, Jill Biden is not Joe's caretaker. She isn't his nurse. She's his fully equal romantic partner.

TUCKER CARLSON [02/14/2021]: Jill Biden is not a doctor, no. Maybe in the same sense Dr. Pepper is. TUCKER CARLSON [03/01/2021]: So, we spent the last year hearing about a health crisis—the pandemic. But here are a lot of health crises. This may be the biggest one. Falling testosterone levels, which have completely reshaped our society, and fallen sperm counts which may make it impossible to continue the human race.

KEILAR: In January, Fox had its worst ratings in two decades, and now it's going even further off the anti-truth rails in an effort to remedy that. Fox is going full Tucker, more outrageousness, more extreme opinion, and consider what that means. Tucker Carlson, who recently won a slander case filed against him, is not exactly a graduate from the Joe Friday School of Journalism. If you want just the facts, his show is certainly not the place to go. Just take a look at this. A federal judge wrote this opinion, last year, in a case that Carlson won, dismissing a defamation case against him. The judge in that case said Fox’s lawyers, quote, persuasively argued the general tenor of Carlson’s show should inform a viewer that Carlson is not stating actual facts about the topics he discusses, and is, instead, engaging in exaggeration and non-literal commentary. The judge said Fox was convincing as it made the case, quote, that given Mr. Carlson's reputation, any reasonable viewer arrives with an appropriate amount of skepticism about the statements he makes, end quote. And yet, still, what he dishes out is what a huge chunk of the country is consuming as if it is the gospel. Clearly Carlson and Fox are, to quote Demi Lovato, sorry, not sorry. So this should come as no surprise. Fox CEO, Lachlan Murdoch, son of Fox founder Rupert Murdoch, telling an investment group the network is now the loyal opposition to the Biden administration. Quoting Murdoch here, the main beneficiary of the Trump administration from a ratings point of view was MSNBC. That’s because they were the loyal opposition. That's what our job is now with the Biden administration. You'll see our ratings really improve, he said. CNN chief media correspondent Brian Stelter is with me now. Well, I mean, transparency, at least, Brian?

BRIAN STELTER: Ha! I guess so. After 10, 15 years of this network claiming it's just fair and balanced every time it's turned further to the right. Now, the younger Murdoch is admitting what the network is all about. It is an anti-Democrat network. That's the agenda. You know, the spin today, Brianna, as he was talking about the opinion shows, but the opinion shows are what define Fox News. All of the newscasts have been shrinking and the audience for those news programs has been shrinking as well. Fox viewers want the red meat provided by Tucker Carlson, and, by the way, who is Lachlan Murdoch's closest friend or associate at Fox? It's Tucker Carlson. The channel’s increasingly the Tucker Carlson channel! And that tells you everything you need to know about the Fox News playbook right now.

KEILAR: Yeah, look, we know there are a shrinking and small group of straight news journalists at Fox, but it is a small section of what is at Fox. They're in the reporter ranks, they're not the ones, in general, hosting shows. And increasingly, Fox is moving into what the prime time has made them – you know, has made them into. Murdoch admitted that the Fox audience, Brian, is disappointed in the election results. How much does that factor into this strategy moving forward and the Fox lineup?

STELTER: That is the big story. That is the major factor. The Fox audience does not want to hear bad news about Republicans, does not want to hear good news about Democrats. So, this is all a ratings ploy. And it is very clear from the programming and the sources inside Fox who are speaking out about it. It is notable that Lachlan was speaking to investors saying, hey, the ratings are going to come back, the viewers are going to come home. And, to some extent, that's starting to become true. But this is all about business, it’s all about profit. I think when people want to understand how this propaganda machine works, and when it doesn't work, ultimately, it's about Rupert and Lachlan Murdoch and how much money they can make from all of this. You know, Brianna, there is another Murdoch son, James Murdoch. He’s on the outside; he’s much more liberal. He is disgusted by the Tucker Carlson’s of the world, but, right now, he’s not involved. He’s buying his time, wondering if someday he might be able to come in and try to take over. That would be a kind of HBO-drama worthy moment. But, so far, there is no sign of that. Right now, this channel is moving further and further to the right, to the point that I had one source at Fox say to me, I feel like we’ve gone so far right we’ve fallen over.