If you predominantly get your news from NBC, CBS, CNN or MSNBC, then you’re probably unaware of the fact that, on Wednesday, Instagram removed the account of prominent left-wing Democrat Robert F. Kennedy Jr. for allegedly spreading misinformation regarding COVID-19 vaccinations. In a statement, Facebook said “We removed [Kennedy’s] account for repeatedly sharing debunked claims about the coronavirus or vaccines.” 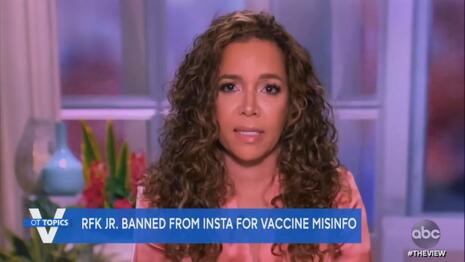 To its credit, ABC did cover the controversy swirling around Kennedy. The network aired coverage on both Thursday’s Good Morning America and Friday’s The View.

Since the election, the left-wing media have relentlessly denounced propagators of dangerous, unsubstantiated conspiracy theories; however, when Kennedy, a Democrat, is embroiled in controversy, the major networks — aside from ABC — remained silent.

The story was picked up by several major print and online publications, but the liberal media basically ignored it.

Imagine if Kennedy were a registered Republican propagating farcical and potentially dangerous anti-vaccine-related conspiracy theories. Such a story would absolutely have dominated this week’s impeachment-saturated broadcasts and the networks would have rejoiced in such a banning.

Good Morning America covered the story in earnest, reporting that such conspiracy theories and anti-vaccination rhetoric likely make the collective battle against COVID-19 much, much more challenging:

DARIEN SUTTON [ABC MEDICAL CONTRIBUTOR]: We're currently waging a war against this virus, but another part of this war that people don't often talk about is the war against misinformation and having someone that is so beloved and followed sharing this information and facts not based or data not based in science makes this war a lot harder for those of us who are fighting it.

It is worth mentioning that CNN’s Christine Romans did briefly mention this story at 4:50 AM on Early Start, on Thursday, hardly primetime coverage. She spent a whopping twenty-two seconds, in total, on the topic.

The left-wing media’s—somewhat successful—attempt to obviate reporting on Kennedy’s controversy couldn’t have been done without their various sponsors, which can be contacted via the Media Research Center’s Conservatives Fight Back page, conveniently linked here.

MICHAEL STRAHAN: We turn now to our “GMA” cover story. Instagram taking action against Robert F. Kennedy Jr., one of the major voices against vaccinations. Erielle Reshef joins us with more on why his account with 800,000 followers was pulled. Good morning, Erielle.

ERIELLE RESHEF: Good morning to you, Michael. Robert F. Kennedy Jr. has recently come under fire for spreading debunked conspiracy theories about COVID-19 and the vaccine. Now Facebook says it's taking more aggressive action against those accounts propagating misinformation on its platforms. Overnight, Instagram shutting down Robert F. Kennedy Jr. 's profile, claiming he was spreading false information related to COVID-19 and vaccines to his roughly 800,000 followers. A spokesperson for Facebook which owns Instagram saying, “We removed this account for repeatedly sharing debunked claims about the coronavirus or vaccines.” Earlier this week the company announced increased efforts to combat the spread of misinformation related to COVID-19 and the vaccine.

[CUTS TO CLIP OF DOCTOR SPEAKING]

DARIEN SUTTON [ABC MEDICAL CONTRIBUTOR]: We're currently waging a war against this virus, but another part of this war that people don't often talk about is the war against misinformation and having someone that is so beloved and followed sharing this information and facts not based or data not based in science makes this war a lot harder for those of us who are fighting it.

RESHEF: The son of the late former U.S. Attorney General Robert F. Kennedy is a well-known figure among anti-vaccine conspiracy believers. His controversial anti-vaccination stance also causing a rift within his extended family. In 2019, two of his siblings along with other family members penning this Politico article entitled, “RFK Jr. Is Our Brother and Uncle. He's Tragically Wrong About Vaccines.” The group writing, “He has helped to spread dangerous misinformation over social media and is complicit in sowing distrust of the science behind the vaccines.” As recently as last year, Kennedy partnering with disgraced former Dr. Andrew Wakefield, whose debunked claims falsely linking the MMR vaccine to autism helped fuel modern-anti-vaccine conspiracy theories. And Facebook says that it will be expanding the enforcement of its new policies in the coming weeks. Robin, Kennedy did not respond to our request for comment.

JOY BEHAR: So there's plenty of misinformation floating around about COVID vaccines and a lot of it is making people think twice about taking it. Robert Kennedy Jr. was just banned from Instagram for posting these – some debunked claims. So first, Trump gets taken down by Twitter, and now RFK Jr. gets taken down by Instagram, and only Zuckerberg is left because Robert Kennedy Jr. still has lots and lots of people on Facebook following him. So now, Sunny, do you think that more tech companies will start policing these lies and misinformation? It is their right to do that—they are a private company. What do you say?

SUNNY HOSTIN: They are a private company. Well, they are a private company so the First Amendment doesn't apply to them, right? The First Amendment only applies to government speech. So I think the bottom line is here, Joy, we want our companies to be good corporate citizens, and what better way to be a good corporate citizen than to shut down misinformation about the coronavirus or the efficacy of the vaccine? I mean, to date I believe there have been almost 500,000 Americans have died from the Coronavirus, and why would you allow someone that has almost 800,000 followers on Instagram and someone that has 300,000 followers on Facebook to disseminate misinformation about the virus, misinformation about the vaccines, leading people not to take the vaccine, leading people to maybe not wear their masks, not social distance. I mean, this is a public service, I think, that Instagram has done, and I'm actually surprised that Facebook hasn't taken down his page, there, because people are dying from this, from this deadly virus.

HOSTIN: And he's not helping. It's just shocking that he still has his Facebook page, quite frankly, and I know that people are going to start tweeting about censorship and big tech and all this stuff, but don't they have a responsibility on these platforms to curb that kind of misinformation?

BEHAR: Yes, they do.

HOSTIN: Isn't that what we've wanted?

BEHAR: It's also disappointing that he's a Kennedy. I mean, you expect better from them. Sara, what do you think needs to be done here?

SARA HAINES: Well, action needs to be taken, but it needs to be collaborative. The reaction in this story often is the big tech needs to step up. But, their big, great idea was the platform. What happens is law enforcement and intelligence, they need to catch up, you know, when you look at all the algorithms and everything else, and we've seen the danger of the misinformation, specifically, recently, with all these QAnon people that have come out sand said it started on social media when the radicalization began, but I do think it doesn't fall strictly on the backs of these tech companies because I know there was an incident once with me and Twitter, and I had to deal with police and they didn't even know where the crime had occurred because it was on the Internet. So, you know, you look at the dark web, when the Internet was created and all these weapons and everything were being traded, law enforcement has to catch up and has to catch up fast. So I think it falls on more than just the shoulders of the tech companies.

BEHAR: Okay. Thanks very much, and we'll be right back.