When the Right Protests, It Must Be Wrong 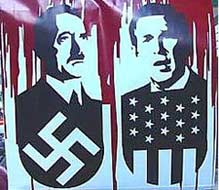 For eight years in America, protest was in and all the cool kids did it. We had flamboyantly dressed Code Pinkers demonstrating at conventions and in sessions of Congress, calling Marine recruiters “traitors” and protesting wounded soldiers at Walter Reed Army Medical Center. Then there were the crazies from Acorn stalking Wall Street executives at their homes. And anti-war lefty Cindy Sheehan got so much news coverage from the major networks and top newspapers that they practically had to create a bureau to handle her antics.

Through it all, the left whined that President George Bush was a fascist – with “BusHitler” a common term among the foam-at-mouth Birkenstock set. (Google Bush and Hitler and you’ll get more than 1 million hits including a bunch of Photoshopped images of Bush in a Nazi uniform with a Hitler mustache.) We were supposed to bear with it. Dissent was patriotic we were told. Those hate-spewing anti-war activists really loved our soldiers – especially when they were mocking the war right outside a veteran’s hospital. And the endless stream of Nazi comparisons were just free speech, after all.

That all happened before January 20, when the left, along with their supporters in the news media, decided protest and dissent were suddenly unpatriotic. Welcome to hypocrisy, the millennial edition. Now everything said or done in those eight years is forgotten. America has a blank slate to build hope and change under Obama, so we are told.

Don’t dare criticize him, knock his policies or voice your opinion. Do it and you are called “mobs” or racist by the media and treated as scary forces of hate reminiscent of Waco, the Klan or Nazis. (Cue Speaker of the House Nancy Pelosi for one of the most idiotic statements of this or any century by linking protesters to Nazis. And she followed that by saying they’re also “un-American.”)

For the rest of this op-ed, please go to www.businessandmedia.org or click on this link.