NB Podcast: No Pity Party Here as Stelter Leaves CNN by Proving Why He Was Axed 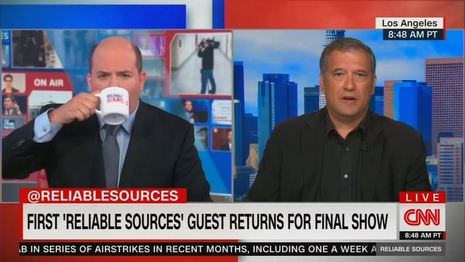 Always claiming to be interested in explaining how the news was made and serving as an almost ombudsman of the press, Stelter instead served as their janitor and chief defender while himself becoming one of the most hated figures in the liberal media.

Reliable Sources wasn’t always a conservative and Fox News hatefest as, from 1992 to 2013, it was helmed by reputable journalists Bernard Kalb and then Howard Kurtz. However, it was axed Thursday by new CNN boss Chris Licht and his bosses at Warner Brothers Discovery as they finally begin to make changes that we hope will bring CNN back to the center after years of sanctimonious and poisonous liberal advocacy.

After having watched the series finale so you don’t have to, we also discussed the worst moments, ranging from obsessing over Donald Trump to trumpeting the supposed plight of D.C. and New York-based reporters to the final guest in perpetual carnival barker Brian Karem.

We closed by sharing some of our favorite blogs from over the weekend, including a deranged take on MSNBC that our Mark Finkelstein would have been fitting if it had come from a gathering of people who believe the moon landing wasn’t real.

To hear the full episode, listen below or wherever you find your podcasts.