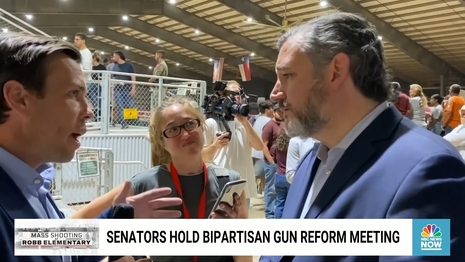 Sky News reporter Mark Stone has gone viral this week for his combative interview with Senator Ted Cruz (R-TX) attempting to shame him for refusing to endorse mass gun control measures (so, like those back in Europe). Between Thursday night and Friday morning, the confrontation was trumpeted on ABC, NBC, CNN, and MSNBC with Stone trashing “American exceptionalism” as “so awful.”

While he’s been lionized on the broadcast networks back here in the U.S., these American outlets have kept viewers in the dark on how he’s anything but a straight reporter who hates the Second Amendment, but one with an anti-Israel problem.

Back on June 8, 2021, Stone was accused of anti-Semitism after he tweeted this response to a question from someone who argued slanted media coverage against Israel has led to increasing “Jew hatred in the U.K.”:

I’m so sorry your children have to hide. Unacceptable. It’s interesting that so many *Israelis* tell me that the ‘Jew hatred’ you experience is actually the consequences of the current Israeli government’s policies; their prolongation of an untenable occupation.

Jewish News Syndicate (JNS) said that Stone’s take “angered many Twitter users,” which led him to insist he was merely summarizing what others had told him. The Jewish Chronicle also wrote soon after that his tweet “appears to contravene the [International Holocaust Remembrance Alliance’s] definition of antisemitism.”

Their definition? “[H]olding Jews collectively responsible for the actions of the state of Israel.”

British-Israeli political scientists David Collier had a deep dive a month earlier on May 19, 2021 that called Sky News’s reporting from the Middle East “shameful” with “Stone...leading the charge over the cliff” to ignore the importatance “contextualiz[ing]” and “professionalism.”

In reaction to calls from Palestinian leaders for “a ‘Day of Rage,’” protesters and terrorists were met with swift resistance from Israeli military and police forces, but that didn’t sit well with Stone: “I saw a lot more instances of entirely unnecessary, provocative behavior by Israeli police/military today.”

His posts have become a one-sided rant, during which he is reduced to retweeting known hard-left anti-Zionist activists such as Daniel Seidemann and Mairav Zonzsein. In recent days, Stone has even retweeted Chris Doyle, the Director of the anti-Israel propaganda NGO, CAABU. There are no ‘balancing’ tweets on Stone’s timeline, no centre-right or centre-left commentators. This places Stone’s personal choice of political bedfellows as being akin to those who speak at anti-Israel campus events.

I turn to social media accounts because it shows the personal choice of the reporter. This is what Mark Stone *chose to share* with his followers.

Mark Stone has made 12 posts on Facebook about the conflict in total. Three of them were sky news reports, that referenced both sides of the conflict. These were the other nine:

All of these lean only one way. There was not a single FB post from Stone that focused on the suffering of Israelis, the children in the bunkers, the dead civilians or the 1000s of rocket attacks. It was *ALL* about the suffering of Palestinians. 100%.

Also in May 2021, Stone offered a cushy interview with the co-founder of Hamas, Mahmoud Zahar, who said in the interview that Israel has no right to exist. Just prior to sitting down with Stone, Zahar demanded Arab countries question the Holocaust because it wasn’t that “extraordinary” since European countries have, in the words of Memri TV summarizing his thoughts, “deported the Jews and killed them, and that they did so because Jews spread corruption.”

So while Stone has been swooned over by some of his comrades and worshiped by far-left Twitter as some sort of real journalist, a closer review would have shown he’s no more of a journalist than CBS News abortion reporter-turned-Planned Parenthood spokesperson Kate Smith.