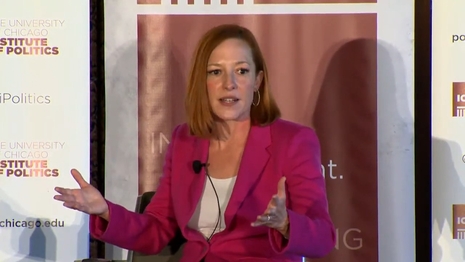 Former White House Press Secretary and future Peacock host Jen Psaki joined the University of Chicago’s Institute of Politics (IOP) Wednesday for her first post-Team Biden interview and dished on her affinity for Peter Doocy, threats to her family (and not expressing concern for what Supreme Court justices have faced), some of her mistakes, and how a Hillary Clinton administration press office might have had less on-camera briefings.

And during the Q&A portion, Psaki spared with a conservative student from the venerable Chicago Thinker over her encouragement of protests against the justices.

IOP faculty members and far-left New York Times reporter Jennifer Steinhauer started with Doocy because “[w]hether people follow politics, didn’t follow politics, the country was sort of mesmerized by these weekly, or often more than that, sparring that you had with the Fox News reporter in the briefing room.”

Psaki started by making clear she “do[es] like Peter Doocy, and that may not be popular with everybody” on her side of the aisle.

Psaki explained that her working relationship with Doocy was part of her goal “to reestablish civility in the briefing room....people could hear information” as well as see tough questions and debate.

Speaking of Doocy more specifically, she said she determined early on that everyone there would be “treat[ed]...with respect” and “call[ed] on” even though “Fox...didn’t always have positive reporting about the President or the Vice President.”

Lamenting the Trump administration was too focused on “disputing the legitimacy of institutions or the media,” Psaki returned to the liberal narrative that Fox questions were somehow less legitimate and seemed to have conceded some of the briefings were “performative” (click “expand”):

And so, you know, we began a lot of these sparring, it became sparring because he would ask questions. He wrote the questions a lot of times, sometimes I’m sure they were worked out with people he worked with at Fox. They represented what Fox was talking about on that day. And you could sometimes often predict what they might be, right? It skewed a lot more about immigration and the border and the Vice President and all sorts of things that may not have always been — were — were — they wanted to make into a controversy. But I will say, at the end of the day, we did not brunch, but we also didn’t hate each other. It was somewhere in between. [LAUGHTER] What I will say is that we had a civil, good relationship, I will say. What I will say is there is a good question to be posed. Maybe someone will pose this or will not. I’ll pose it for you. We had a good relationship. We had a sparring in the briefing room. Is that performative? Maybe it is, right? And what does it say about the fact that we had that back and forth in the briefing room, and on social media I was cheered for pushing back on Peter Doocy, and he was cheered for pushing back on me. And in many ways, as much as we had a civil, good, professional relationship, that does speak to kind of the division in society and what social media does and drives. That was a long answer. I’ll try to make them shorter, but proceed.

On threats, Psaki said it’s been “very scary” to “have had a lot of threats against me, against my family, names of my kids texted to me with my home address” and “threatening mail.”

Of course, that wasn’t the case when she said back on May 10 and 12 the White House “certainly continue[s] to encourage” protests “outside of judges’ homes” and other forms of protest (read: harassment) so long as it doesn’t turn to physical violence.

It was on that point that Chicago Thinker’s Daniel Schmidt stepped up in the Q&A to go “Peter Doocy mode” and read that quote to Psaki.

Of course, Psaki insisted she “never said that” (click “expand”):

SCHMIDT: Hey. Thank you for doing this. My name is Daniel Schmidt.

SCHMIDT: So, here it goes. A week ago after the Roe v. Wade protests —

SCHMIDT: — were happening in front of the Supreme Court justices’ houses, you said, and I quote, “We certainly continue to encourage that people protest outside of judges’ homes”

PSAKI: I never said that.

PSAKI: That’s a key word in there, isn’t it?

PSAKI: Well, first, thank you for your question and bringing it forward. Let me first say, because I think facts matter and facts are important, I never — I never encouraged anyone to protest. I encouraged them to do — engage peacefully, and to do it without violence, without threats, and without intimidation. And that’s something I said many, many times and I think is vitally important. It is also true that peacefully protesting in places where it is legal, and it is legal in many places in the country, including outside of some places in the country for sure, is something that is, that is allowed. And I’m not going to tell people, I don’t think it’s the role of the government to tell people where they can or cannot peacefully protest. If they’re breaking the law, of course, they shouldn’t do that. And I also said that, too.

Psaki unsurprisingly was coy when it came to expressing regrets, insisting her one on a broad scale was a feeling she often “should have” made a point “more clearly” with “more context.”

Specifically, she insisted her tone on December 6 wasn’t up to standards due to a late night at the Kennedy Center as well as her answer to Bloomberg reporter Josh Wingrove’s question on February 2, 2021 about the Space Force.

Steinhauer also asked Psaki to name best and worst days and neither were entirely surprising with the best having been the celebration of Ketanji Brown Jackson’s Supreme Court confirmation vote and the worst having come when 13 soldiers were killed in Afghanistan.

On a more nitty gritty level, Steinhauer questioned Psaki on 2006 comments from Clinton press secretary Mike McCurry in which he regretted having ever introduced cameras to White House briefings.

Psaki revealed that, had Hillary Clinton won, the Obama administration would have suggested Team Clinton dial back the number of on-camera briefings, which was amusing considering the liberal media meltdown when Sean Spicer did that in 2017.

Prior to the Q&A, Steinhauer invited Psaki to list areas of disagreement with Biden and Psaki remained cagey with lame answers about wishing he had traveled more and held fewer meetings.

But there was one of substance, which was her complaint that he didn’t do enough media interviews seeing as how “he’s somebody who has a broad swath of knowledge about a lot of things over a lot of years, whether it’s politics or foreign policy.”

To see the relevant transcript from March 18, click here.