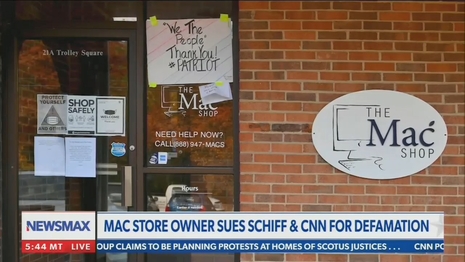 Devine wrote that he chose “to fight back after losing his business and being harassed for 18 months by Big Tech, the media and Delaware locals in President Biden’s home state,” which Mac Isaac referred to as “a collective and orchestrated effort by social and mainstream media to block a real story with real consequences.”

He added his goal is “to reveal that collusion and more importantly, who gave the marching orders” as it was “led by 51 former pillars in the intelligence community and backed by words and actions of a politically motivated DOJ and FBI.”

Devine says, according to Mac Isaac, “his business and reputation were ruined” with Mac Isaac himself stating he “was bombarded with hate mail and death threats” to the point that he “was forced to close his computer repair business near the Biden family homes” and spend a year in Colorado.

In previewing the evidence, Devine outlined the reasoning behind his suit against each party, including CNN and Schiff (click “expand”):

Mac Isaac claims Schiff defamed him in an interview on CNN two days after The Post began publishing revelations from the laptop.

In the interview with Wolf Blitzer, Schiff told the CNN host — without citing evidence — that he believed “the Kremlin” was behind a smear of Joe and Hunter Biden.

“Well, we know that this whole smear on Joe Biden comes from the Kremlin. That’s been clear for well over a year now that they’ve been pushing this false narrative about the vice president and his son,” Schiff told Blitzer, according to the suit.

The suit claims CNN knowingly broadcast the “false and defamatory story” that the laptop was linked to a Russian disinformation campaign, causing Mac Isaac significant damage, including the closing of his repair shop.

“CNN’s broadcast of the false statement accuses the Plaintiff of committing an infamous crime, i.e., treason by working with the Russians to commit a crime against the United States of America by attempting to undermine American democracy and the 2020 Presidential election,” the suit states.

On Wednesday, Mac Isaac joined Fox News Channel’s Tucker Carlson Tonight to explain why he’s taking action against those who made him “collateral damage” in their campaign to protect Joe Biden in the waning days of the 2020 campaign.

Following a brief montage of liberal media types denouncing the laptop as having been concocted and supplied by Russian intelligence, Carlson noted that, a year and a half later, “everyone is admitting, the laptop was not Russian disinformation” even though so many had “smeared [Mac Isaac], who had nothing to do with any of this, as a tool of Putin.”

Mac Isaac recalled how “people just assumed that I was a hacker or a thief, mainly because of Twitter, labeling the material from the laptop being hacked, and then banning the subject matter completely,” so it’s worth taking action to fight back and clear his name.

Carlson wished him luck at the end of the segment: “I hope you see these creeps in bankruptcy. I really mean that. John Paul Mac Isaac, an innocent bystander trying to do the right thing, a tool of Putin. Thank you for coming on tonight. Appreciate it.”

To see the relevant FNC transcript from May 4, click “expand.”

TUCKER CARLSON: Plus, the former owner of the computer repair shop that received Hunter Biden’s laptop joins us next to explain how he is fighting back against those who accused him of spreading Russian disinformation. It seems like a dream now, but it’s totally real.

[ON-SCREEN HEADLINE: We Were Told This Was Just “Disinformation”]

CARLSON: So back in April of 2019, a man dropped off an apparently water-damaged MacBook Pro to a Delaware computer repair shop outside Wilmington. A year later, the New York Post reported on the contents of that laptop, but of course, you know the rest of the story. Big Tech censored it because we are on the eve of a presidential election and it would hurt their candidate whose campaign they were funding, Joe Biden, and so they denounced it including former heads of the Intel agencies as Russian disinformation. Watch.

FRANK FIGLIUZZI: Disinformation that he knows to be fabricated and supplied by a foreign intelligence service, and despite the warning, he’s still doing it.

TIFFANY CROSS: You have said this entire thing is so obviously a Russian plot.

JOHN AVLON: It’s sort of a crazy quilt at this point, which has all the hallmarks of Russian disinformation. That said, it wasn’t for lack of trying.

BRIAN STELTER: CNN reported on Friday, the U.S. authorities are seeing if those e-mails we just talked about are connected to an ongoing Russian disinformation effort.

CARLSON: Prediction: The Russia hysteria will not age well. We’re going to look at this tape in about 10 years and think, what country was that? And it’s kind of starting to happen already. They’re now admitting — everyone is admitting, the laptop was not Russian disinformation. It’s real. It was Hunter Biden’s. The problem is that they smeared the repair shop owner who had nothing to do with any of this as a tool of Putin. Now that man is taking action. His name is John Paul Mac Isaac. He is the former owner of the Mac Shop Computer Repair Store, and he joins us tonight to explain. Thanks so much for coming on Mr. Isaac, appreciate it.

JOHN PAUL MAC ISAAC: Thanks for having me.

CARLSON: So, they called you a tool of Putin. We know how that feels. What are you doing about it?

ISAAC: Well, and I’m taking them to court. The collusion that took place in mid-October of 2020 just astonished me when it happened. And, you know, I just — I couldn’t believe it. It was just a unilateral decision to all call this Russian disinformation without even deciding if there was going to be any collateral damage, which there was.

CARLSON: And you were that. I mean, I think the country was hurt. Biden got elected in a demonstrably unfair election, but your life was totally overturned. Tell us what happened to you?

ISAAC: Well, initially, people just assumed that I was a hacker or a thief, mainly because of Twitter, labeling the material from the laptop being hacked, and then banning the subject matter completely. But after 51 pillars of the intelligence community decided to call me a Russian disinformation ,,campaign and then Adam Schiff went on CNN to follow that up to express his concerns with the rest of the nation, it was pretty much from that point on, I was labeled a stooge of Putin and Putin thanks me for that service.

[ON-SCREEN HEADLINE: Mac Isaac: There Was a Collective and Orchestrated Effort to Block a Real Story]

CARLSON: So you don’t have your store anymore.

ISAAC: No, I — I had to get out of town before the election. I had to close the shop and leave Delaware.

CARLSON: Yeah, have you gotten a call of apology from Adam Schiff?

ISAAC: No, I don’t expect to right now either.

CARLSON: I hope you see these creeps in bankruptcy. I really mean that. John Paul Mac Isaac, an innocent bystander trying to do the right thing, a tool of Putin. Thank you for coming on tonight. Appreciate it.

ISAAC: Thanks for having me, Tucker.

CARLSON: Thank you very much.