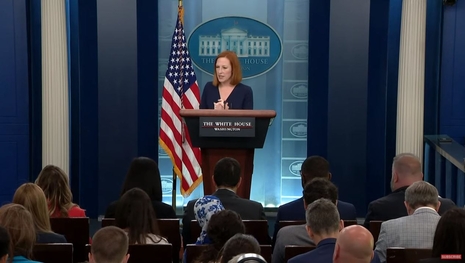 Politico White House reporter Max Tani debased himself and his colleagues Friday morning to a humiliating degree with a 2,900-word tome about how covering President Biden and his administration has, for the press corps, become “a bore” and “journalistic sedative” that “lack[s] flair” seeing as how they’re no longer fighting to save America from Donald Trump.

All told, the level of arrogance and self-centeredness in this piece was almost too much and a reminder of how, for much of the liberal media, their purpose in life is to live for the benefit and support of Democrats, not all Americans.

The eye-rolling started from the get-go with Tani lamenting that “the crown jewel of American political journalism” in the White House beat has “become a bore” under Biden as the plethora of “book deals” and launching of “high-profile television careers” from the Trump era have dried up.

Tani insisted that “the storylines” over the last two years have been “important, and substantive,” but then fretted they’re “lack[ing] flair or be[en] hard to get viewer attention” with the supposed answer being more hyperbolic Trump coverage (which he called “Donald Trump and the future of democracy”).

In other words, every show should be like the rich, white, liberal, wine mom story hour with Nicolle Wallace.

Continuing to give away the game, Tani cited one “well-known television news executive” as having said they couldn’t “think of any[one]” who’s become a star under Biden.

Before reaching in for another Biden kiss by saying it’s “mission accomplished” for him in having made “Washington news boring again,” Tani tried to cover his tail by claiming there’s still “not...a lack of reportorial talent in the room...nor” a deficit of “important” “work being done.”

Tani then gave anonymity for a White House reporter to spout off about how actually holding Press Secretary Jen Psaki’s feet to the fire “makes you look like an asshole” with “the work” of reporters at 1600 Pennsylvania Avenue being “a lot less rewarding, because you’re no longer saving democracy from Sean Spicer and his Men’s Warehouse suit.”

Following a humorous aside about the paltry sales of a syrupy Jill Biden biography by two AP reporters, Tani unintentionally put on display what was always true, but something elites couldn't understand in that destroying Trump became an idol (click “expand”):

For the vast majority of Americans, and even plenty of people in Washington, it’s all been a relief — the minute-by-minute churn of presidential politics is no longer so omnipresent and existential in their lives.

“It’s not such a bad thing that there’s a new sense of sobriety in the White House briefing room,” said Eric Schultz, a former deputy press secretary under Obama. “The histrionics probably got out of control. It is serious business… It’s probably good for democracy for this to be less personality based and more about the work.”

“It’s a boring and difficult job. It’s tough to be a White House correspondent if you want to break news, they’re so airtight,” another reporter who covered both the Trump and Biden White Houses from the briefing room. “There’s no Maggie [Haberman]. Who’s the Maggie of the Biden administration? It doesn’t exist.”

Tani acknowledged that reporters from the Obama years like Savannah Guthrie, Jake Tapper, and Chuck Todd ascended to “anchor chairs” with “[t]he Trump presidency” having “turned the reporter-to-celebrity conveyer belt up to an even higher speed” because Trump “worshiped his near-daily combat.” But what was missing there was how reporters also turned up the heat and bought fainting couches at IKEA.

Tani brought up three prime examples from the Trump years (Jim Acosta, Yamiche Alcindor, and Kaitlan Collins), but failed (as he’s done throughout the piece) to point out how such egotism is/was bad and not the point of being a reporter.

He also provided a key tell about how the press view Biden and so dutifully comply with his team’s demands (click “expand”):

CNN’s Jim Acosta — who seemed to overtly relish his role as a Trump sparring partner — got his credentials revoked by the president’s press office and needed security guards when he reported live from Trump rallies. It helped his standing at CNN, where he leveraged the notoriety into a weekend hosting position that he currently occupies. Yamiche Alcindor regularly pressed Trump in the briefing room early on in his administration, and was offered hosting duties and multiple television contracts with PBS. Similarly, one network source said then CNN president Jeff Zucker was impressed by Kaitlan Collins’ performance after seeing her on television during several briefings. She had come to CNN from the Daily Caller and was, for a time, in digital media obscurity. In short order, she became a prominent figure on the network and the go-to fill-in host for Tapper.

Biden, by contrast, has been a journalistic sedative. The 79-year-old president is not immune to political controversy or making news, having made several recent proclamations about his goals for the Russia-invasion of Ukraine that went far beyond his administration’s stated policy.

But attention isn’t his brand, the way it is with Trump, and his staff exerts far more control over his time and his media interactions, alongside their efforts to eliminate traces of palace intrigue from political coverage. The president does few interviews and his communications team has an informal policy of not engaging in gossip stories (whether they always stick to it is another question) and chide reporters who they don’t think focus enough on policy. Press secretary Jen Psaki rarely expresses emotion from the podium, where she speaks slowly and avoids lengthy confrontations with reporters.

Skipping ahead past admissions that networks are spending less on White House coverage and an amusing observation that Team Biden’s profited from the last two years (and not reporters), Tani closed with a contrast in reporters between Fox’s Peter Doocy and NBC’s Mike Memoli.

Spoiler alert: He seethed over the former, but liked the latter.

Tani described Doocy as someone who’s brought “semi-regular drama...to the briefing room” and armed with questions that aren’t real but instead “Fox News fodder.”

On being recognized and derided on late-night TV, Doocy unsurprisingly took the high road, calling it “surreal” to be seeing his name mentioned on shows he grew up watching.

Again, to the shock of no one familiar with Doocy, he emphasized he has professional relationships with White House officials, doesn’t plan “to cash in on” his newfound attention, and even “had a private conversation” with Psaki after she accused him of “sound[ing] like a stupid son of a bitch” because he worked at Fox News (click “expand”):

But if Doocy is the closest thing the Biden White House has to a high-profile antagonist, even his back-and-forths with the administration don’t come close to the animosity on display between Trump and the assembled press corps, or the attention it generated. Doocy told Politico he has good relationships with the Biden communications office, who he talks to multiple times a day. He insists that he does not relish the chance to beef with the press secretary.

Earlier this month, Psaki was asked by former Obama communications official and current Pod Save America host Dan Pfeiffer whether Doocy really was a “stupid son of a b----, or just plays one on TV?”

Psaki replied by saying that Doocy “works for a network that provides people with         questions that, nothing personal to any individual, including Peter Doocy, but might make anyone sound like a stupid son of a b----.”

The exchange set off anger among Fox News personalities and executives, who said her comments were inappropriate. But they didn’t seem to bother the Fox News correspondent himself. Doocy said that he had a private conversation with Psaki about her comments after the event, and told Politico that they were not mean-spirited.

“I think that’s a classic example of how stuff can be taken a little out of context,” he said.

While Doocy may be the most high-profile of all the reporters currently covering the White House, he also concedes he’s in no hurry to cash in on it. He told Politico that he plans on seeing the Biden White House through, noting that he was there on the first day of the campaign, and wants to be there at the end. Asked if he was interested in following in the footsteps of other White House correspondents and hosting a show, Doocy took a second to reply.

“Someday,” he said. “But right now I’m having too much fun doing this.”

In contrast, Memoli was placed alongside Obama favorites “such as Jeffrey Goldberg, David Remnick, Steve Kroft and Steve Inskeep,” who “succed[ed]” because they were “reflections of the” man “they cover[ed].”

Tani held Memoli up as “the dean of the Biden beat” who “reflect[s] [Biden’s] values” and gushed that he’s “an affable” and “decided unflashy.”

Tani added that Biden’s presidency “has been a gift for Memoli as well, who often breaks news about the administration...by playing the long game” with Memoli himself boasting that, in Tani’s summation, Team Biden is “different and more low key than the previous administration.”

Memoli explained why he thinks the administration has seen him as a go-to reporter:

Maybe part of it is just that they see me as somebody who comes with that level of context, and has seen them through the ups and downs of a race and has an appreciation for the arc of his presidency, his candidacy and his career in a way that they’re still challenging other reporters to understand as well.

Mike, let me translate it for you: It’s because you’re a obsequious lickspittle.