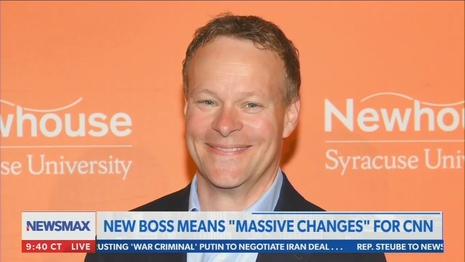 With Russia’s brutal and unprovoked war against Ukraine having dominated the headlines, you may have missed some of the latest headaches for CNN, which has sought to pivot back to its past reputation and reporting of yesteryear thanks to the war. But in reporting from far-left outlets at Daily Beast and Rolling Stone, the headaches over Jeff Zucker aren’t over and, when it comes to CNN’s future, plenty will need to be looking over their shoulders.

The trio said that Licht — who’s coming from CBS’s The Late Show after having created CBS This Morning and MSNBC’s Morning Joe — “has already begun backchanneling with key figures, including agents and reporters.”

One question: Whenever the war in Ukraine ends, what is CNN then going to do with its time?

Speaking of that, Daily Beast cited a The Washington Post piece that argued Licht wants CNN to return to a network-based in “hard news” and, specifically, he plans “to tone down the often opinionated and emotional reporting from stars.”

What’s, even more, a yikes for their fellow carnival barkers? Try this: “Under Licht, expect to see more boots-on-the-ground reporting and fewer partisan panels with talking heads like former Trump staffer Alyssa Farah.”

No one should be under the impression that CNN will suddenly drop its liberal tilt, but it would be worth something to see fewer liberal mobs scattered across six or eight different cameras.

And as Licht has an interest in free agent Lyin’ Brian or CNN+ host Chris Wallace to fill Fredo Cuomo’s time slot, Licht’s “appointment has been received positively within CNN and especially among the on-air talent who’d grown tired of some of the overwrought coverage of Zucker’s exit.”

Over at Rolling Stone, they cited 36 sources in a damning piece entitled: “‘Cuomo-W. Trump-L.’: How CNN's Jeff Zucker and His Cronies Manipulated the News; Texts, email exchanges, and 36 sources tell the true story behind the downfall of TV's ultimate operator.”

Reporter Tatiana Siegel had the goods, including this doozy about how Zucker and colleague/lover Allison Gollust colluded to bend CNN’s coverage to their personal whims, specifically to boost then-Governor Andrew Cuomo (D-NY) in 2020 (click “expand”):

On the rainy morning of March 28, 2020, President Trump addressed a phalanx of journalists outside the White House following a call with New York Gov. Andrew Cuomo. “There’s a possibility that sometime today, we’ll do a quarantine — short-term, two weeks — of New York, probably New Jersey, and certain parts of Connecticut,” he said while clutching his umbrella. “This would be an enforceable quarantine. You know, I’d rather not do it, but we may need it.”

Hours later, Cuomo was asked during his daily press conference about Trump’s comments. “From a medical point of view, I don’t know what you’d be accomplishing,” he offered with a shrug.

But as sunset approached, the governor appeared on CNN with a much more forceful assessment, predicting that a quarantine would unleash “chaos and mayhem” in the tristate area, and homing in on the financial implications of such a move. “I think it would paralyze the economy,” he said. “I think it would shock the economic markets in a way we’ve never seen before.”

CNN anchor Ana Cabrera teed up a seemingly tailor-made question: “What would this mean for the stock market? Would it have to shut down?”

“Oh, it would drop like a stone,” Cuomo insisted. “That would drop this economy in a way that wouldn’t recover for months, if not years.”

What viewers did not know is that in the hours between Cuomo’s Albany press conference and his CNN dinner-hour appearance, he corresponded directly with CNN leadership. Firing off a text to the network’s top marketing and communications executive, Allison Gollust — who had also been his own publicist a few years prior — Cuomo wrote, in an apparent reference to CNN President Jeff Zucker, “Ask Jeff to call me plz.” Zucker’s representatives say he has “no record” of speaking to Cuomo that day. Regardless, Cuomo landed on a talking point sure to grab Trump’s attention. And Zucker certainly knew exactly which levers to pull when it came to the president, given their long and lucrative relationship via the reality show The Apprentice.

About 30 minutes before Cuomo appeared on CNN by remote feed, Gollust emailed a programing staffer, cc’ing Zucker, and offered the governor as a last-minute guest to talk about Trump’s proposed quarantine. She then told Zucker that the governor would like to speak with him. When the segment ended, Gollust texted Cuomo: “Well done . . . Cuomo-W. Trump-L.”

Referring to his downfall, Siegel said Zucker’s behavior was “the culmination of” his “three-plus decades spent in a craven pursuit of ratings and power, a career that would foster a toxic culture at two networks and fan the flames of the disinformation age along the way.”

Siegel also called him “both kingmaker and king” having exerted control over CNN while she cited “one former NBC comrade” who described Zucker as someone who “will do anything for good ratings and buzz, journalist ethics be damned.”

While Zucker had maintained his resignation was a result of the exposed affair, plot twists abound. First off, both parties claimed their relationship had only recently turned romantic. (“Jeff and Allison have had a professional partnership for over 22 years. It evolved over time and became romantic during Covid. Any speculation to the contrary is false,” Heller says.) But multiple colleagues say it began decades ago.

According to one source familiar with the CNN investigation and another who is a Democratic operative, Gollust’s ongoing connections to Gov. Cuomo also raised eyebrows. Two sources familiar with the matter say Gollust and the governor exchanged texts in which they agreed to meet up for drinks on multiple occasions in 2019 and 2020. In early 2020, several months after his split from partner Sandra Lee, Cuomo asked Gollust, “You don’t want to see me now that I’m single?” She replied, “A drink with you would be the best date I’ve had in a while.” Four months later, he fired off a text to Gollust suggesting he be her “pool boy.” She responded that she’d welcome that scenario, and they set up a call. When their texting resumed, Gollust wrote, “That was fun. Sleep well.”

Gollust’s texts went beyond friends’ banter. When a rumor circulated that Trump was about to shut down New York City, Gollust invited the governor to come on CNN’s New Day the next morning and “squash it.” She quipped to her former boss, “I’m pretty sure I stopped being your publicist 8 years ago, but apparently I still am.” On another occasion, he asked her to critique his press conference.

It was well-known that Gollust and Zucker were more than colleagues, NBC alums say.         They frequently flew on the NBC private jet together with another Today colleague, who sources say was also involved in a barely hidden relationship with a married top news executive. It was around this time that Lauer, the rising star, began targeting young, vulnerable women, particularly assistants, temps, and receptionists.

While doubt remains about what Zucker knew of Lauer’s behavior, NBC’s top dog offered a clue at a 2008 Friars Club roast of the anchor that was dubbed “three hours of dick and pussy jokes,” many at the expense of Curry. “It’s just good to see Matt up here and not under my desk,” Zucker cracked. “I don’t want to say Matt’s a germaphobe, but he’s the only guy I know who uses Purell both before and after he masturbates.”

When it came to Trump, Siegel said Zucker’s decision to wage war on his administration “played directly into his hands” and “set the stage for the misinformation age” in which the public wouldn’t trust them when it came to crucial and (actually) fact-based information.

As part of her close, Siegel remarked that Zucker’s left “a media landscape more fractured than ever, with public distrust of journalists at an all-time high” and Zucker’s CNN having decided its “coverage...not by the issues but by whatever sensational dreck would keep eyes glued to the screen, and newsrooms where alleged predators roamed freely.”