Credit Where It’s Due: Stephanopoulos Torches Lavrov on Russian Lies About Zelenskyy 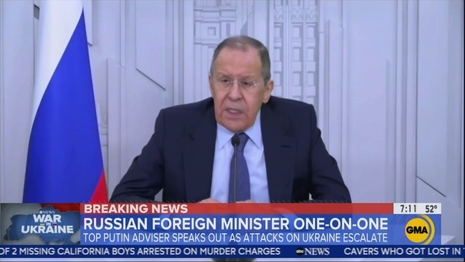 Stephanopoulos spoke with Lavrov in a press event featuring other English-speaking journalists and, with only two questions, Stephanopoulos made them count, starting with this hardball:

Lavrov denied the atrocities Russia’s carried out, saying he couldn’t “comment” on the “great deal of” “conjectures,” whining that the west was “trying to close down all of the outlets...broadcast by Russia from Russia, on how the special military operation progresses and advances and how the Ukrainian army and the neo-Nazi battalions behave towards the peaceful civilians.”

He further lied by saying Ukrainians “rob and rip off the Donbass settlements” with Ukranian soldiers stealing from their own people, “behav[ing] like pillagers and marauders.”

Lavrov also went full boomer, urging Stephanopoulos to “[p]lease visit our website...to get a detailed transcription of what the Kyiv neo-Nazi regime is now doing.”

Taking a shot at Stephanopolous for describing Putin as “a killer” in March 2021 to President Biden, Lavrov concluded by telling him: “[T]he real killers are siding with the Kyiv regime.”

Stephanopoulos didn’t mince words in his other question, taking aim at one of the ugliest lies of the war: “Do you believe that President Zelenskyy, the first Jewish president of Ukraine, whose families were [sic] killed in the Holocaust, is a Nazi?”

Lavrov kept to the Kremlin line that he indeed was, arguing that he’s been “manipulate[d]” by “the Nazis and neo-Nazis” because, “[o]therwise, it is hard to account for how President Zelenskyy can preside...over a society where neo-Nazis” have free reign.

When he keeps saying that his grandfather was a Tartan — look at the laws that President Zelenskyy, which claims to be a global citizen — well, look at the laws about the indigenous nations and ethnicities of Ukraine, not mentioning the Russian nation. How can not a neo-Nazi president support laws banning the Russian language at school, which is horrible, not only in education but in everyday life. They imposed a prohibition on just asking for — for drugs and medications in a pharmacy in Russian and in — in the — the Crimea — Russia, they have three official languages: Russian, the Crimea-Tartan language, and Ukrainian language. And any national or Russian living in Crimea has a right to turn to local authorities, to an office, speaking his vernacular language and they have to respond in that language.

I can numerate facts for quite a long — you know those striking images and salient things and you don't have time to ruse and read the facts and just spend at least half an hour visiting our website, the foreign ministry website and the defense ministry website. You won't be allowed to raise your voices. I know that — a French journalist — you know, yesterday, actually, President Macron said that accusing Zelenskyy and Ukraine of the rampant nationalism is a lies [sic]. Well, he responded to him. But his compatriot, a French journalist, responded to him. She visited Donbass and she described the bombings and shelling of schools and the killings of two women, that worked in that school and — and she put to shame all of the western politicians that turn a deaf ear, a blind eye on to that. She wasn't allowed to put it on the air. But you know, it's available on social media. Please learn more facts. Don't try to pretend this — that this American action movie is developing according to your plan of absolute good and absolute evil.

“Bombed out streets, homes leveled, and emergency workers searching for survivors. The Ukrainian military trying to hold on to the country's second-largest city, Kharkiv, which has been mercilessly shelled for days,” he said.

On Wednesday, Pannell visited Ukraine’s “largest children's hospital, where the patients...have been moved to the basement amid fears an attack could come at any moment.”

And near the Ukraine/Poland border, senior national correspondent Matt Gutman covered news that the number of refugees cracked one million with the United Nations predicting it could soar to four million.

Also during the presser, NBC’s Keir Simmons asked from Moscow about “Putin’s reasoning” for the invasion amid speculation he’s “erratic and isolated” and then whether Lavrow would “reassure the world that Russia would not fire a nuclear weapon in anger, would not fire a first strike.”

In one other notable highlight, far-left U.K. news anchor Cathy Newman of Channel 4 — who suffered a meltdown at having to interview Jordan Peterson — asked how Lavrov could “sleep at night knowing that Russian bombs and bullets are killing children.”

Lavrov denied any Russian role, so Newman demanded to know if he’s “preparing your defense in a war crimes tribunal” and then if he considered the fact that their “blood is on your hands” (click “expand”):

LAVROV: I cannot say anything to add up on what I have already said. Any human life is previous. All hostilities, unfortunately, result in casualties in among servicemen and civilians. Our troops that participate in the special operation have a strict order to use high-provision weapons to render inoperable the military infrastructure, facilities, and the dorms of the Ukrainian soldiers. They are of no target to strikes. I can only render condolences to all those who are —

NEWMAN: [Inaudible] You say only high-precision is used. But hundreds of civilians are reportedly already — died. This is now being investigated by the International Criminal Court. I wonder if you personally are preparing your defense in a war crimes tribunal?

LAVROV: I — I know your desire to ask those tricky and sharp questions and you will incite your [inaudible] that this is your — this is your job. It’s not about mass media, but rather about being a tool of hammering it into people’s mind the exact things that the western leaders need. Once again, I reiterate I don’t justify any action that leads to the losses in civilians, but the collateral damage coinage was not invented by us, but by our western colleagues during their reckless undertakings in Iraq and other countries before that in Latin America, in Libya. Have you ever tried applying this emotional zeal — same degree of emotional zeal — when — when hundreds of thousands of civilians lost their lives in Iraq or Libya or Syria. I can — I can see that you’re asking rhetorical questions.

NEWMAN: [Inaudible] You started this war. Polina’s blood is on your hands, isn’t it, Mr. Lavrov?

LAVROV: You know, I wouldn’t play these games. You are now speaking as a talk show host. If you want to know my position, I have made it clear in every detail and really with respect to the humanitarian aspects of the operation, but you know, I — I know that you will provide the coverage that you need, but just probably any correspondent has a conscience, even if he or she is taking an order from someone. Just recall how you have been for seven to eight years when thousands of boys and girls and old people were killed in Donbass by the Ukrainian regime. Please visit our website. I really wouldn’t to take your time to engage in many hours of enlisting the details and if you were preoccupied by the humanitarian aftereffects of the hostilities, please — please study these pages that we have on the websites.

To see the relevant ABC transcript from March 3, click here.