PANTS ON FIRE: Joy Reid Says She’s a Journalist Because She Works at MSNBC 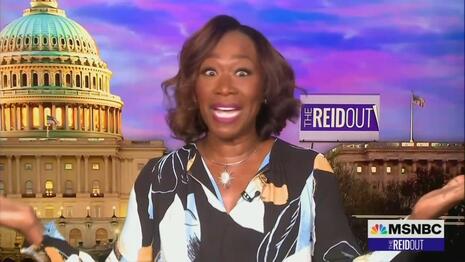 MSNBC’s ReidOut host Joy Reid will be featured in this Sunday’s print edition of The Washington Post Magazine, but in the online portion published Monday, Reid boasted of her focus on “concern for our democracy” and defended her hatred toward conservatives and poisonous style of commentary as fact-based “journalism.”

About halfway through the interview, Post contributor KK Ottesen said “[t]he state of popular discourse is pretty horrendous” and wanted to know if Reid agreed conservatives and liberals were to blame and if there’s a need or “some middle ground” that “reasonable people can trust[.]”

Reid replied that we’ve never had “an objective media” because “human beings are not objective,” so Ottensen pushed back by asking if it made “sense as an ideal.”

Not surprisingly, Reid disagreed, arguing that “the question then is: objective according to who.”

Reid walked into an enormous self-own by declaring herself to be “part of a journalistic outfit” at MSNBC because “[w]e are part of NBC News” and thus “not the same” as Fox News.

Reid continued to dig, saying while “maybe some of the people...in prime time may have liberal views...none of us share our voting records with one another” and instead “shar[e] facts,” regardless of whether they’re “new” or “uncomfortable.”

Pressed on how “there’s a heavy dose of opinion” on MSNBC and could be seen as “opinion journalism,” Reid seized on the second word because what she does is “factual” even if she’s feeling “incredible emotion.”

The self-owning continued as she invoked the scandal-ridden Dan Rather as having relayed “the facts” to viewers with “flavor” and “emotion” along with “Southern quips from his Texas upbringing.”

Reid engaged in yet another self-own as she decried a media culture that’s defined by “a choose-your-own-adventure world where people can decide: ‘I don’t like those facts so I’m going to go here where I can get facts that make me happy[.]’”

Later on and after Reid boasted of how her “morning meeting” for the show “is part therapy session, part idea-pitch session, part trying to get through figuring out how do we get out this information,” Ottesen ended by calling out Reid’s Trump-like insults by wondering if they’re helpful to her mission.

Of course, Reid saw no problem with her juvenile behavior (click “expand”):

Sometimes you’ve used mocking, belittling names, like, “Wormy Kevin McCarthy” or “Reek Cruz” for Ted Cruz. Yes, that’s going to grab somebody, but does that risk having people turn it off and say, “She’s not being fair; she’s taking a cheap shot instead of telling me what’s real”?

The reason that we do that, to be honest with you, is I’ve spent a lot of time reading about the ways that people deal with autocratic systems. And mockery is one way to combat autocracy. It just is. And so I’m not not deliberate about it, right? Mockery is a tool. And when you’re creeping toward fascism — I hate to be alarmist, but I don’t think it is alarmist. We are edging closer and closer and closer to a system that would be unrecognizable to most Americans. And we’re sliding toward it so casually that you have to kind of wake people up to it, right? You have to force people to confront it. And the question is, how do you combat it? Fascistic systems hate to be mocked.

So I’m using it on the kinds of people [like] Tucker Carlson; we call him Tuckums on the show. His is the most-watched show in cable news. And he’s telling people, essentially, that January 6th either didn’t happen or didn’t happen the way we all saw it happen. I mean, incredibly dangerous, the game that’s being played on the other side. And so we’re trying to fight back with every tool we have. We’ll fight back with comedy. We’ll fight back with music. We’ll fight back with art. Because at the end of the day, my parents came to this country because they believed in a system that they found to be incredibly flawed as Black people when they got here and experienced being Black in America in the ’60s. But they believed in the concept. They believed in the idea. And I kind of see America from their point of view. They’re gone now, but I see it the way they saw it — the way they wanted it to be. And so I’m using everything I’ve got. And if mockery is what I’ve got, and a little comedy is what I’ve got, I’m going to fight with that.

However, Ottesen started easy by asking Reid to cite “issues that most animate you and that you feel the greatest mandate to share, to explain, on your show.”

The first of many self-owns came when Reid talked about how it’s supposedly well and good to question the results of an election so long as you don’t storm the U.S. Capitol (click “expand”):

But it’s only one party that does more than just stand up and object, right? Democrats stood up and objected to George W. Bush — his election in 2000 because of profound questions about whether the Supreme Court should be allowed in choosing our president. I think that was a real question. It was a question that bothered me about his election. About its legitimacy. But Democrats didn’t storm the Capitol as a result of that. People went on to have real questions about whether George W. Bush had the legitimacy to launch a war against a country that hadn’t attacked us — Iraq. And yet Democrats didn’t storm the Capitol and smash through the windows.

We have one political party that’s decided that it cannot, and must not, be defeated. That it doesn’t have to accept defeat. And that is the end of democracy. You know, democracy begins not when one party wins an election. It’s when the losing party accepts it. And we’re at the point now where, essentially, it is a Republican dogma that they do not have to accept defeat. That they can overturn electoral defeat. That they can undo electoral defeat. Then we don’t have a democracy. And we now have laws on the books that not only say we’re going to make the bar to vote so high that you cannot reach it. And then, if you somehow manage to leap up to the heights we forced you to jump, and you make it, you get through those hoops, we’re then going to maybe overturn the election anyway, if we don’t like the result. That’s not a democracy.

Instead of pushing back, Reid later added that her job has been to scare people because they need to know “the status quo...isn’t as safe as they think it is.”

Also in that answer, Reid suggested she herself is someone with a healthy media diet of going “outside your bubble” based on how “the other side...spend[s] a lot of time paying attention to and using everything we say over here at 7:00 in their A blocks.”

Largely due to the nonsense first flagged by NewsBusters, we’ll rate the second part as true. As for the first, the idea Reid gets outside her bubble is comical.