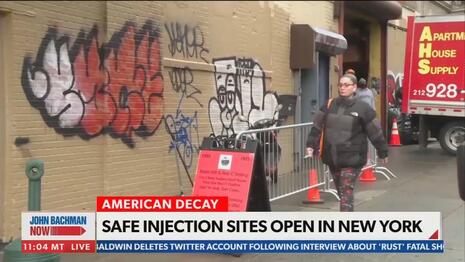 Doing reporting the liberal media wouldn’t dare to do (or at least consistently), National Review’s Zachary Evans has a piece from Thursday morning highlighting the scene outside New York City’s two so-called safe injection sites, which “provide clean syringes and overdose-prevention services to addicts, who bring drugs from outside,” allow them to shoot up, and then be revived by medical personnel if they overdose.

Evans interviewed a business owner near one of the sites who told him “[t]here’s needles on the sidewalk all the time” while, in Harlem, the other site sits across the street from a preschool.

Supposedly, liberals don’t seem to have a problem with that. As Evans noted, supporters argue the centers provide a safe refuge for drug addicts on a path to recovery and, by having trained medical officials on-site, can save lives from deadly overdoses.