Someone Need a Hug? MSNBC Panel Loses It Over ‘Racist,’ ‘Violent’ SCOTUS Ruling 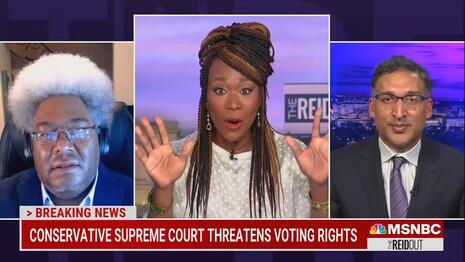 Thursday was a less-than-stellar day for immature and venomous charlatans like MSNBC’s ReidOut host Joy Reid due to the Supreme Court ruling in favor of Arizona’s election integrity laws. So, it was only natural Reid and a cast of characters melted down over the ruling as a “racist” and “violent blow against democracy” that proved the centrality of “the Big Lie...to Republican orthodoxy” and legalized the banning of Black Americans from voting.

Always one to engage in dangerous hyperbole full of incitement, Reid began her latest grievance-filled segment by calling the ruling “another violent blow against democracy by upholding two restrictive Arizona voting laws” on ballot harvesting that was “the latest notch in the belt of Chief Justice John Roberts.”

Reid added the ruling was yet another “defang[ing]” of the Voting Rights Act by the Roberts Court and thus “[left] the country closer to our Jim Crow past than to our civil rights era.”

After quoting the cartoonish Ian Millheiser from Vox, Reid claimed the Republican-appointed Justices are beholden to Donald Trump’s views on the 2020 election and will allow for states to ban black people from voting:

Sadly, the conservative decision shows — shows you just how central the Big Lie has become to Republican orthodoxy...According to Alito, states can pretty much do whatever they want as long as they don't make it obvious.

Former Obama Solicitor General and MSNBCer Neal Katyal did his part, calling the ruling worse than expected and urged Americans to read the ruling “as one of those southern states that is trying to disenfranchise African-American voters and what this decision did is give a retort — a rhetoric and How-To book on how to do it.”

Dubbed “Mad Scientist Fat Albert” by our friend Varad Mehta, frequent MSNBC guest and The Nation correspondent Elie Mystal did not disappoint in throwing a temper tantrum, which began with “the essential takeaway” from Alito’s ruling was that, “as long as you don't say the n-word when you are taking away people's votes, it is fine.”

Outbursts and all, he continued by arguing the Arizona law was purposefully racist and meant to ensure Republicans would win elections (unlike the For the People Act or something) while the six justices gave their eager approval (click “expand”):

These laws in Arizona that he just held up with the help of John Roberts, as you explained, his lifetime commitment to destroying this act, these laws were racist by empirical definition. That's not me having a conjecture. It was empirically shown that these laws had a disparate impact on black, brown, and native voters in Arizona. The plaintiffs, the state of Arizona admitted these laws had a disparate impact and admitted that's why they were there. Like, let’s be clear. The — Arizona said the reason why they wanted these laws was to help them win elections by depressing the vote, right? And then the Supreme Court — in Alito’s opinion, the Supreme — he says that — for one of the laws that allowed them to discard ballots cast in the wrong precinct, Alito said that one percent of African-Americans and one percent of Native Americans and one percent of Hispanic Americans cast their votes in the wrong precinct while only .5 percent of white Americans cast their vote in the wrong precinct. But that racism just wasn't enough — wasn’t enough racism to trigger the Voting Rights Act. I — it must be nice to have a job where you can tell other people how much racism is real. But that's — that's the decision. That's the upshot here. As long as you don't make it completely obvious that you're doing something with bigotry in your heart — as if that was easy to prove — then Alito is going to let you do it.

On Mystal’s claims about it being racist to throw out ballots or expect voters to ensure they show up at the right precinct, we’ll let that simmer for you, NewsBusters readers, on the utter stupidity of this bellyaching and the insipid cry of disparate impact.

Moving on, Reid reacted to Mystal’s jiggery-pokery by trying to one-up him with even more nonsense, arguing it wasn’t “hyperbole” to assert the Supreme Court had again legalized literacy tests with Shakespeare passages or having minorities voters guess bubbles in a bar of soap before voting.

Contrary to what these mountebanks were claiming, such a measure would be laughed out of any legitimate courtroom and Section 2 was still very much alive. In its analysis of the ruling, the Daily Signal wrote that this wouldn’t serve as the be-all, end-all: “[T]here is little doubt that we can expect more litigation around the court’s five newly announced guideposts in the future.”

Instead of play the role of sober analyst and jurist, Katyal remained ensconced in their house of horrors, telling Mystal and Reid that their claims were sound (click “expand”):

Exactly, Joy. I love how you followed up on Elie's great point. And, you know, there's two different ways of proving discrimination in the law. One is called disparate treatment, that is, you're intentionally going after someone because of their race and the other is a disparate impact in which, you know, you're looking at statistics and other things. And, of course, in a modern era, almost everyone — not everyone — but almost everyone avoids the use of terms like what Elie referred to before and in state legislatures or even the President does. When I was arguing the Muslim ban, his lawyer's defense was, “well it doesn't say it discriminates against Muslims in the text of the order.” Of course not. Cause modern discrimination hides itself through patterns and practices and data and things like that. And so, the question in this case is whether that would be enough. And Elie, you're absolutely right that the test that's being proposed now to legitimize Arizona's laws would legitimize a whole host of things which is why I think the conversation has to move nationally to how we get these Voting Rights Acts passed. You know, back when I argued that voting rights case in 2010, it had just been reauthorized in the Congress in the House by 421-3 and in the Senate 98-0. That was, you know, hose — those votes underscore this is the most American thing we could imagine, the right to vote. And how could it be derived? How could the Supreme Court be writing these? It's time for Congress to act.

Reid went to break with a childish claim about how Roberts and his colleagues gave their ruling as such because conservatives no longer think racism exists:

[R]acism no longer exists. According to John Roberts, racism is over because Obama was President. Therefore, you know, 1 out of 320 million people who is black was elected President, poof, racism is gone. And by the way, so you think we're just bringing up hyperbole again, Florida actually enacted a poll tax. If you serve prison time, to come back, you have to pay a poll tax. And that's now legal, according to Justice Alito. Perfect. We’ve gone backwards.

Reid’s Thursday evening of hatred and venom for any and all conservatives was made possible thanks to the endorsement of advertisers such as Allstate, Audi, Oscar Mayer, and Tractor Supply Co. Follow the links to see their contact information at the MRC’s Conservatives Fight Back page.

To see the relevant MSNBC transcript from July 1, click here.