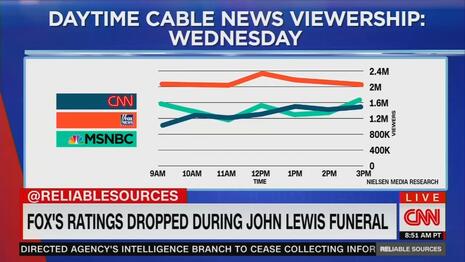 There’s no bottom for CNN and Jeffrey Zucker puppet Brian Stelter. On Sunday’s Reliable Sources, he reveled in the ratings for CNN and MSNBC versus Fox News during the funeral of Congressman John Lewis (D-GA) and implied there was a race angle to the disparity.

Of course, what the ghoul never entertained was the notion that, while Lewis is a civil rights icon, he was a partisan Democrat. Therefore, FNC’s right-leaning audience wouldn’t be as interested compared to a Republican. If FNC had done this, one can imagine the fury.

First (and to be fair to Stelter), here was the relevant change with NY1 host and CNN political analyst Errol Louis (click “expand”):

STELTER: Every channel was live, all the broadcast networks, all the cable channels, but I saw something in the ratings that blew me away. And I don't usually talk about ratings, but look at this from Wednesday. This is a typical day on cable news. OK? Typical daytime cable news ratings. You'll see Fox is on top, CNN and MSNBC are a little below. Now, go to Thursday. This is during the funeral. The red line is Fox. The ratings fall off a cliff. Fox's viewers didn't want to watch the funeral. Fox went from about 2 million viewers before the funeral down to like 400,000, 500,000, 600,000 during the funeral. And then right after the funeral, right after Obama, Fox's viewers came back. This is stunning. I know people aren't surprised by this. They say Fox's programming doesn't appeal to African-Americans or the minority groups, but have Democrats been so demonized by Fox News that even the celebration of life of a civil rights legend is something they don't want to watch?

LOUIS: I mean, this is what we're dealing with. We talk about a polarized America, this is your proof positive.

LOUIS: It really sort of confirms that this is, you know, Fox News is basically functioning as an adjunct of the Trump White House press operation and the Trump campaign. And it was distasteful, it didn't fit the narrative that they're (ph) fed (ph) 24 hours a day and so they couldn't make sense if it, didn't want to see it and just moved on to something else apparently.

Got that? With some rhetoric winks and nudges, the conclusion was FNC and their viewers don’t like black people!

Stelter added that FNC did carry the funeral with special live coverage like the other top broadcast and cable networks, but it’s worth acknowledging there that if FNC was racist, they wouldn’t have aired it at all.

Predictably, the Zuckerbot’s insinuation about FNC and its viewers was picked up like clockwork by both Axios and The Daily Beast.

But as usual with CNN, a look of the facts revealed a different story in a sampling of Republican funerals.

When the Washington D.C. funeral for former President George H.W. Bush was held on December 6, 2018, Fox News came out tops on cable with almost 3 million viewers (2.91 million), as per the Los Angeles Times.

Nielsen Media Research numbers also found that, across the six hours of programming that included the funeral, FNC averaged a 47 percent advantage over CNN and 88.5 percent over MSNBC.

And when the funeral for Bush’s bride and former First Lady Barbara was held six months earlier on April 21, the results was the same. Nielsen numbers showed the three hours yielded FNC a 53 percent lead over CNN and a 93 percent bigger audience than MSNBC.

Nielsen pegged funeral coverage as having spanned from 1:44 p.m. Eastern hour until about 4:00 p.m. and, like with the first two, FNC had a massive advantage with over a million viewers with CNN muscling one hour above a million while MSNBC never cracked 500,000 total viewers.

There, FNC averaged an audience 69 percent larger than CNN and a whopping 285 percent lead on MSNBC.

If funerals were supposed to be about the person that passed, Stelter found a way to focus attention on the very thing he can’t live without talking about: Fox News. And that, NewsBusters readers, is a pitiful way to go about life.

Stelter's gross double standard and cheap shot at FNC was sponsored by advertisers such as One-A-Day vitamins, Oscar Meyer, and Prevagen. Follow the links to the MRC's Conservatives Fight Back page.