In a Thursday afternoon that felt like a trip back to life before the coronavirus pandemic, CNN and MSNBC were not only apoplectic over the Department of Justice dropping its case against retired General Michael Flynn, but despondent over the “demoralizing,” “destructive,” “nuts,” and “terrifying” “injustice” that signaled “the collapse of the Justice Department” and “the rule of law.”

Cable airwaves were loaded to the brim with former Obama officials and sympathetic reporters, all ready to tee off on the latest nail in the coffin of their years-long fetish with destroying the Trump administration through the Russia probe.

Below is a Notable Quotables-style recap of the worst and most hyperbolic takes from the two networks, all from May 7.

“So I just hung up with a former FBI official who said simply, “oh my God”….Mike Flynn's lawyers have been engaged in a smear campaign very, very similar, torn out of the same playbook as the smear campaign Donald Trump ran against many of the same FBI leaders when he was under investigation by Robert Mueller….It's a stunning, stunning but I guess any close watcher of William Barr couldn't describe it as shocking move from this attorney general in the midst of a pandemic to drop a case against someone who admitted to committing the federal crime of lying to the FBI.”

“It’s a pretty dark place on social media. The very first comment after the story broke that I saw on Twitter was ‘Putin, if you’re listening, high-five your asset.’ And there are Russian flags and Russian memes popping up in response to this story. It is a dark place, as you mentioned, a story that drops during a pandemic. A public health crisis and economic crisis and yet, here we are.” 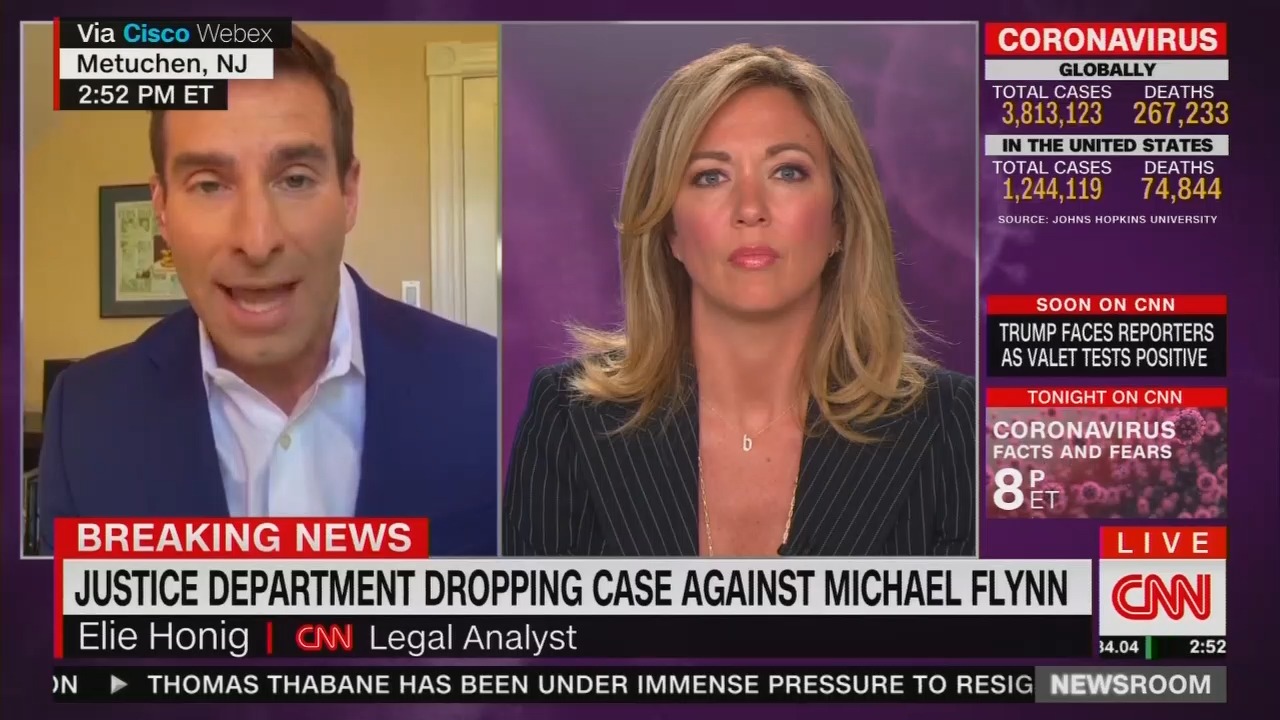 “The fix is in. This is an absolute injustice….[W]hat does Bill Barr do? He says of all the tens of thousands of cases he's been in charges of in the Department of Justice, look at that one. Let's take a closer look at that one. Not coincidentally the one the President has railing on for months and years now, and now we see Bill Barr just doing Donald Trump's dirty work. Now Donald Trump is not going to have to issue a pardon, because Bill Barr has stepped in and taken this really unprecedented step. I've never saw anything like this in my 14 years as a federal or state prosecutor.”

‘Unfair’ Outcome Will Be ‘Demoralizing’ to DOJ, ‘Undermine’ the FBI’s ‘Morale”

Co-host Brian Williams: “What does this do to the FBI and the authority of agents who today and tonight are knocking on doors, pursuing cases and questioning suspects around this country?”

MSNBC contributor/former Obama official Chuck Rosenberg: “Well, Brian, if you're knocking on the door of a friend of the President, it could undermine the work of the FBI. I would hope that, in the ordinary case and the Flynn case has been anything but ordinary, it wouldn't matter very much, but it's not good for the rule of law. It's not good for morale and it's not a fair outcome.”

Former Obama Solicitor General Neal Katyal: “[Y]ou're asking about Justice Department prosecutors more generally. Nicolle, by and large, most of them don't deal with Trump or Russia or Trump's friends…They're just trying to prosecute all the other laws, and for them, you know, it will be incredibly demoralizing but do they really want to leave and abandon the Justice Department, these political thugs, and I don't think there's any other word for it, that want to undermine everything that the department has done for, you know, decades upon decades.”

“There are two, I think, serious problems with the action the Department of Justice took today. One is just the miscarriage of justice in this case….[A]nd two, Mike Flynn is getting treatment that wouldn't be available to any other person in the country….It is, I think, breathtaking dishonesty from the Justice Department and as with the Roger Stone case, it is a sign that if you are a friend of the President, you will get different treatment from Bill Barr…and that ought to worry anyone who cares about the rule of law in this country.”

Chief legal analyst Jeffrey Toobin: “It is one of the most incredible legal documents I have read and certainly something that I never expected to see from the United States Department of Justice. The — the idea that the Justice Department would invent an argument, an argument that the judge in this case has already rejected, and say, that's the basis for dropping a case where the defendant admitted his guilt shows that this is a case where the fix was in.”

Chief national security correspondent Jim Sciutto: So many layers as to why the lies mattered and here you have that whitewashed in effect. I mean, it has enormous --- enormous implications.

Host Wolf Blitzer: And — and Jeffrey, what's the role of the Attorney General Bill Barr in all of this?

Toobin: He's the boss. This is his work. I mean, this is a part of the story where they are trying to undermine the work of the special counsel, of Robert Mueller….It’s all heading towards the President wiping the Mueller investigation out of the history books, at least as far as criminal convictions are concerned.

“And so, this notion that they didn't have a predication which is a fancy way of saying a reason to do the investigation and a reason to talk to General Flynn, is nuts. I'm sorry, that's not a legal word but it's the one that comes to mind. It's crazy.”

Neal Katyal: Boy, I mean, the idea that the Justice Department could do this, you called it stunning. It's past stunning. This is the collapse of the Justice Department as Chuck and I and others who have worked there knew it, and there are tens of thousands of federal prisoners in jail right now. None of them got this kind of review of, you know, scouring to find anything that might possibly be construed as showing his innocence and particularly not after they pled guilty. The rule of law, if it means anything, is the idea that justice is blind. This is not blind. This is open-eyed. This is a political and incredibly destructive thing to the rule of law.

Nicolle Wallace: Neal Katyal, you caught my breath with the collapse of the Justice Department 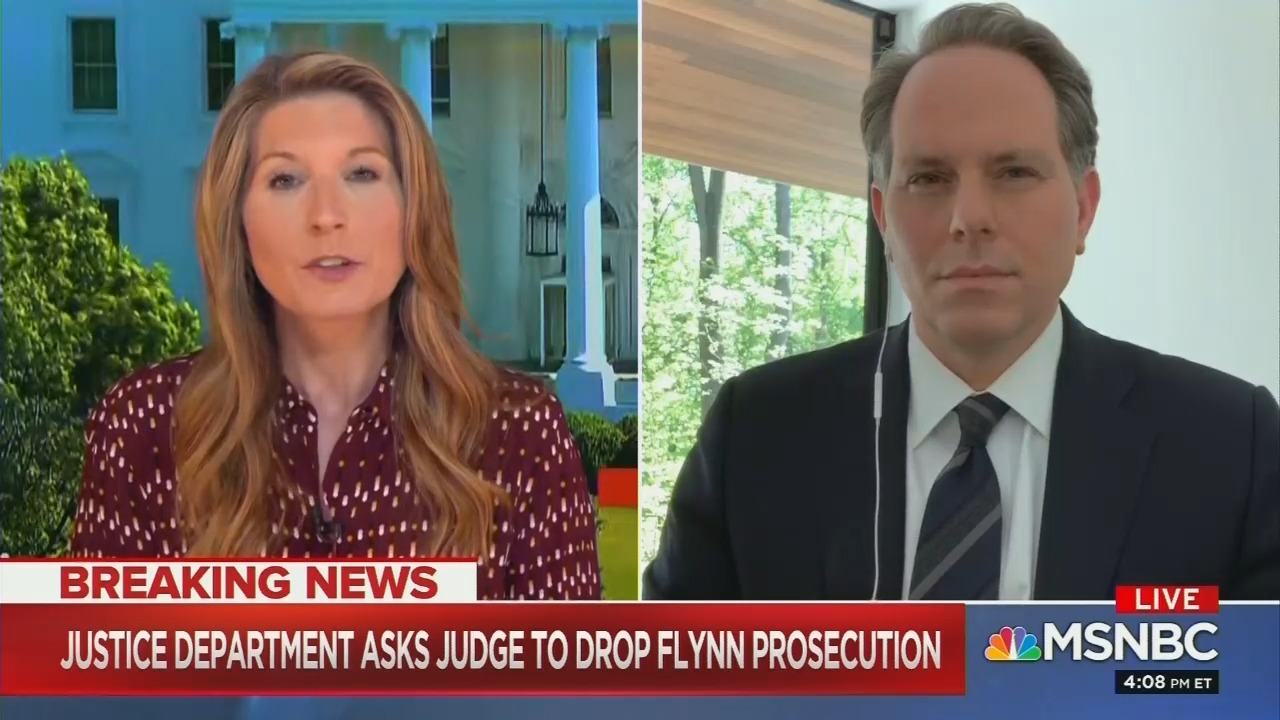 Nicolle Wallace: It took a few years but now he has in his back pocket a little AG who saw to it to let Flynn go. What does that say?

MSNBC national security analyst/former Obama official Jeremy Bash: Yeah and Mike Flynn made his career calling for the political corruption of the criminal justice system. Remember lock her up? Well, today we've seen the political corruption of the justice system that Mike Flynn has long been calling for and I wish that this network and The New York Times and others would not lead with the Justice Department dropped charges. The Justice Department had nothing to do with this. This was the White House 100 percent. President Trump dropped charges against Mike Flynn.