WHAT ARE YOU DOING? WashPost Tries to Ruin Random Twitter User, Calls His Parents

If The Washington Post and senior editor Marc Fisher want Americans to stop calling the press “the enemy of the people,” a place to start would be not publishing stories like Fisher’s March 25 item trying to tear down a man who, as of Wednesday night, had less than 400 Twitter followers.

The thought crime committed by La Mesa, California lawyer Scott McMillan? Offering a harsh and unpopular take about the coronavirus and senior citizens.

In response, Fisher penned a 1,786-word piece entitled “He urged saving the economy over protecting those who are ‘not productive’ from the coronavirus. Then he faced America’s wrath.”

On Twitter, most of the brutal but well-deserved scorn came with Fisher tweeting how he not only wrote about McMillian, but he called his parents: 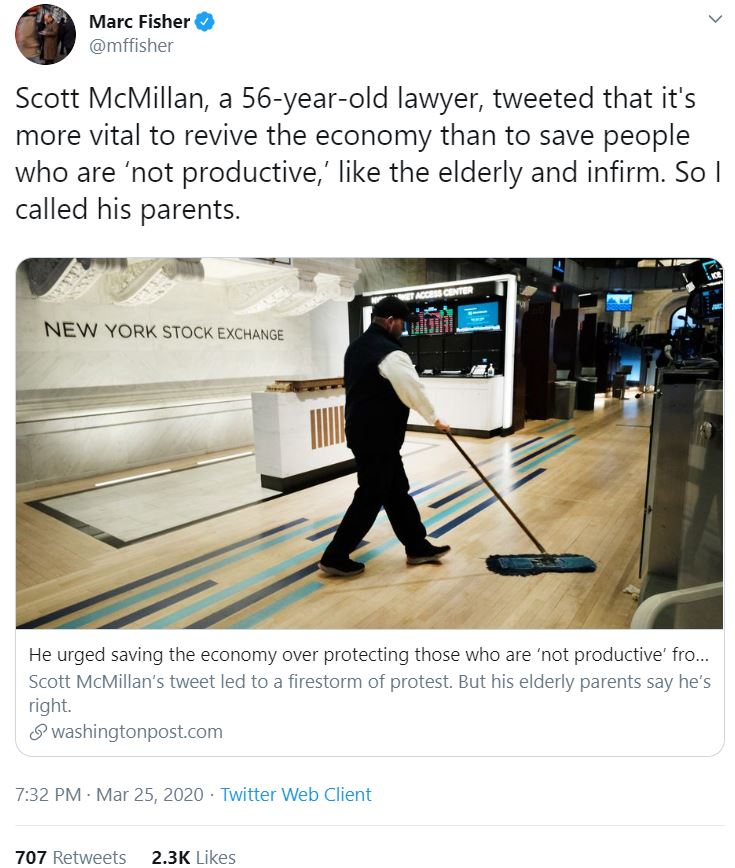 The indefatigable Stephen L. Miller had a field day on Twitter lampooning Fisher’s act of journalistic firefighting, including a warning that he wouldn’t be “letting this go.”

Miller noted how “peoples entire livelihoods are being erased right now” due to the coronavirus but, to parody quote Fisher a la Adam Schiff: “‘Watch me call this dude’s mom and not worry about being laid off for it.’”

Anyhoo, we might as well look at the article in question to see what Fisher did to keep democracy from dying in darkness.

Fisher began: “Scott McMillan had had it with being cooped up, with the whole country being closed, with the collapsing market and the isolation, the constant worry and the politicians who didn’t take the coronavirus seriously when they could have.”

So he replied to a tweet from President Trump with this (which has since been deleted): “The fundamental problem is whether we are going to tank the entire economy to save 2.5% of the population which is (1) generally expensive to maintain, and (2) not productive.”

Sure, others have offered this take, but it’s safe to say it’s not a widely-held view.

Fisher explained that he faced quite the backlash (click “expand”):

At which point, McMillan instantly became Scrooge, a “ghoul,” an advocate for the death of 8.2 million Americans. Within minutes, he was trending on Twitter, and not in a good way.

People called him a “liberal” and a “right-wing nut,” even a “Nazi.” They threatened his livelihood, his family, his home. The polite people told him about their elderly parents, who teach their grandchildren Latin and music and produce more happiness in their golden years than most working adults do in their entire careers. The mean people, who are not shy on Twitter, invoked the full array of lawyer jokes, Soylent Green and the Holocaust to convey just how awful McMillan was for implying that old or infirm people should be put aside to allow America to get back to work. People posted testimonials from clients who hadn’t been happy with McMillan’s legal work.

Within 48 hours, he had received nine death threats.

“I am not a coldhearted monster,” McMillan told The Washington Post in a phone interview. He added: “Nature does this every so often — it wipes out a bunch of us.”

As the blowback grew fierce, the lawyer took down his tweet, took down his website, screened his calls. He was miserable. He took his chloroquine, the anti-malaria drug that Trump kept talking up, hoping that it might protect him against the virus, though there is no evidence that it will. It makes him feel like crap. He lowered his dose, but he keeps taking it because, he said, maybe it does work.

So, a few points. One, anyone surprised by Twitter’s vitriol must either not have an account or be living under a rock. Two, perhaps forcing McMillan to relive the past few days isn’t the best for his well-being. And three, why did Fisher decide to further bring attention to this poor soul’s life again?

A few graphs later, we arrived at the section focused on his parents. Here’s an excerpt (click “expand”):

Scott’s father, Jim McMillan, is alive. He is 78. Scott’s mother, Gloria, is 75. They are well. They are, by Scott’s measure, not productive. Jim is a retired lawyer. Gloria is a retired high school English teacher.

They have been especially not productive since Feb. 23, which is the last time they left their house in San Diego, when Gloria and her friends went to see the Los Angeles Opera perform “Eurydice.” Well, the last time except for 10 days ago, when Jim said he was going to Home Depot to get a light switch to replace the one that went on the fritz. Gloria gave him permission to run that errand, if he gloved up and put on a mask and used the sanitizer.

Gloria’s sister and a friend have been living with Gloria and Jim for several months now, since before the virus, and they’re not going anywhere either.

Since the Walmart trip, they’ve continued their not-productive life at home. Jim mostly stays in his room, leaving the living room to the women. Gloria patrols the house with Lysol spray, keeping the doorknobs germ-free. They all watch a lot of TV.

“The main activity is watching the news,” Gloria said. “We watch Fox, CBS and PBS. We like Judy Woodruff. I never miss the president’s briefings.”

And they agree with Scott that businesses should reopen even if it means putting old folks and people with underlying illnesses and other nonproductive types into quarantine for an extended period.

“I have maybe 10 more years to live,” Jim said. “We shouldn’t sacrifice the economy to save the elderly. We’re on the short list anyway. To screw up my grandchildren’s future over this, what’s the point of that? Why be selfish?”

True to form for this bizarre piece about a man who, before this, had fetch a single mention this week in a Nexis search, Fisher ended with McMillan saying “sorry” for his “insensitive” tweet in a time when “people are really scared.”

So what have we learned, NewsBusters readers? To quote our friends at Twitchy, here’s an answer: “[I]f you’re going to say something controversial on Twitter, make sure to disconnect your parents’ phone lest they get a call from one of the nation’s brave media firefighters.”