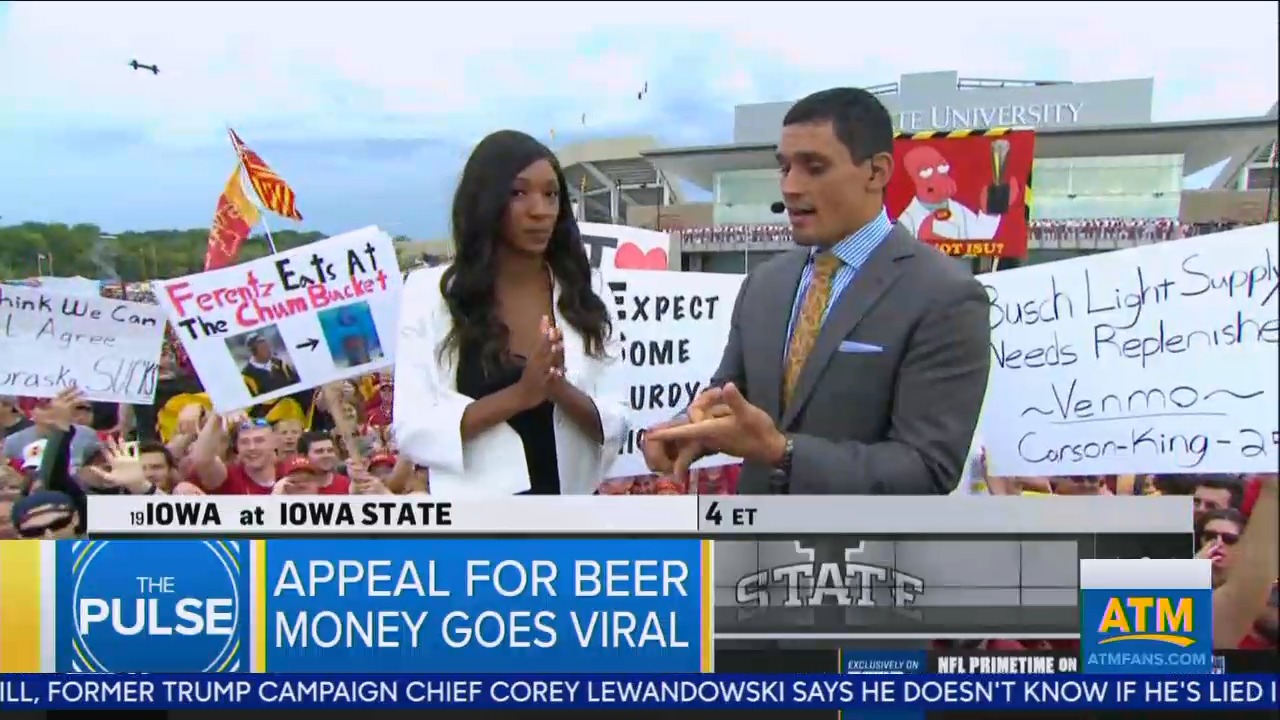 Illustrating the putrid state of the liberal media and their gleeful embrace of the “cancel culture,” the Gannett-owned Des Moines Register and reporter Aaron Calvin decided late Tuesday to impugn the character of Iowa State-fan-turned-cancer fundraiser Carson King using tweets from when the 24-year-old Iowan was 16.

Their reason? It was just “a routine background check” and done for “the public good.”

King took the high road, insisting that the newspaper “has been nothing but kind in all of their coverage, and I appreciate the reporter pointing out the post to me.” However, it doesn’t change the fact that a major media organization decided to engage in character assassination of someone who, if it weren’t for his act of kindness, would be a private citizen.

As for a brief recap, King had a sign that read “Busch Light Supply Needs Replenished” with his Venmo account onset of ESPN’s College GameDay on September 14 at Iowa State. His account quickly filled with donations, so he decided to use the tens of thousands of dollars for good by donating the proceeds to the University of Iowa Stead Family Children’s Hospital. 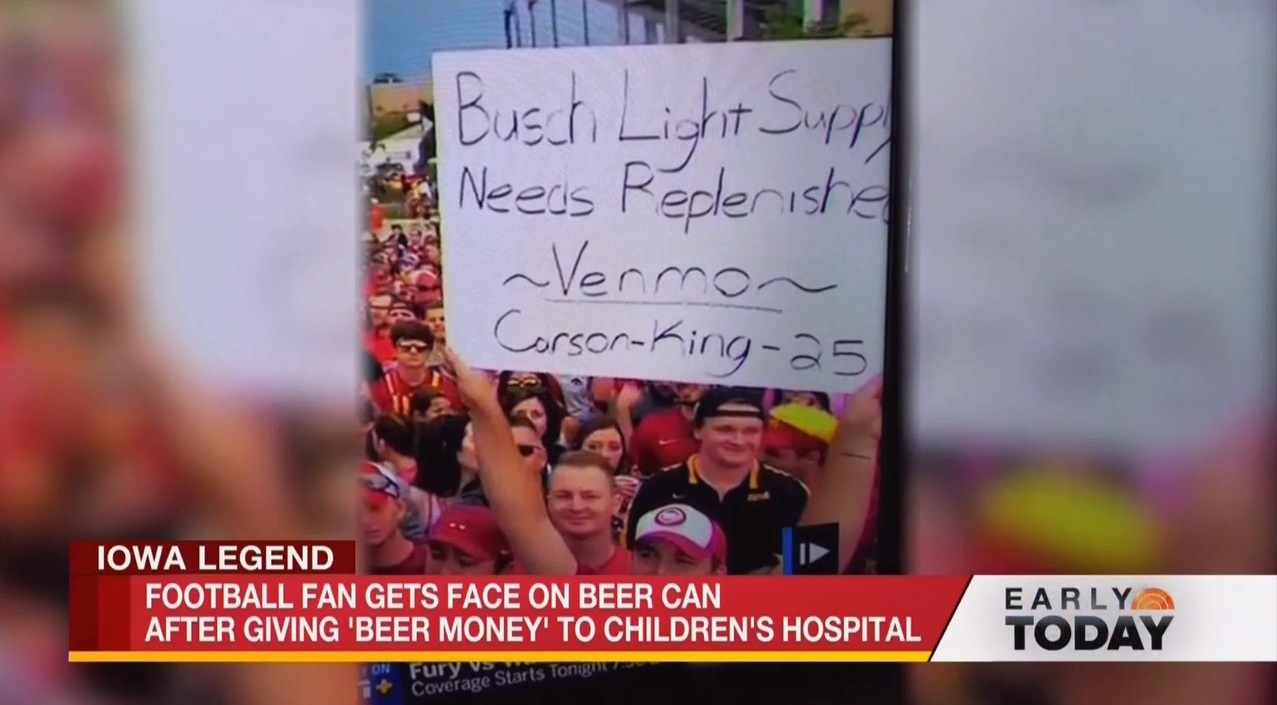 Between additional donations and matching amounts from Busch Light parent company Anheuser-Busch InBev and Venmo, the total topped $1 million. The former even announced King would receive a year’s supply of Busch Light and cans would be made with his name and face on them. Needless to say, King’s story went viral.

But when the Des Moines Register assigned Calvin to profile King, they decided to go through his social media, presenting King with incriminating tweets from when he was a minor.

This led King to hold a press conference, issue a lengthy statement, and Anheuser-Busch InBev deciding to drop him (click “expand”):

A routine background check of King's social media revealed two racist jokes, one comparing black mothers to gorillas and another making light of black people killed in the holocaust. The joke tweets date back to 2012, when King was a 16-year-old high school student.

When asked about the tweets, King was remorseful and thanked the Register for pointing them out, saying they made him "sick." He has since deleted them.

"That’s not something that I’m proud of at all," he told the Register during the day Tuesday.

"I am embarrassed and stunned to reflect on what I thought was funny when I was 16-year-old," he said in a statement posted by WHO-TV. "I want to sincerely apologize."

He also read the statement in a video posted by KCCI-TV.

Anheuser-Busch InBev, Busch Light's parent company, announced in a statement Tuesday night that they will "have no further association with [King]," though they will honor their agreement to match the funds for the children's hospital.

Amidst the uproar, the Register released a statement from executive editor Carol Hunter, offering a full-throated defense of their reprehensible behavior. The full statement is transcribed below.

Hunter reiterated that the takedown of King was “a routine background check...of publicly visible social media posts” because, for some reason, “people who had donated money to King’s cause or were planning to do so” deserved to know about King’s past tweets before helping fight childhood cancer.

She added that the paper’s move to publish the information, but not make it the focus would be the path forward. Hunter later concluded with this dystopian, Orwellian justification: “Reasonable people can look at the same set of facts and disagree on what merits publication. But rest assured such decisions are not made lightly and are rooted in what we perceive as the public good.”

As our friends and other accounts across Twitter have found (see here, here, here, here, and here), Calvin has quite a social media history of his own. Calvin deleted the tweets, claiming that “I apologize for not holding myself to the same high standards as the Register holds others.”

To make matters worse, Calvin cowered by locking his Twitter account just before 1:00 a.m. Eastern and, not long after, the Register tweeted that they were “aware of reports of inappropriate social media posts by one of our staffers, and an investigation has begun.”

So to be clear, dumb tweets from someone raising money for children with cancer is a horrendous offense. But racist, ugly tweets from the journalist assigned to scrutinizing this person like an elected official? Supposedly, it’s more of an imperative to destroy the former.

Perhaps folks should keep all this mind before deciding to do something undeniably good or risk having the news media try to destroy them.

CAROL HUNTER: Some of the toughest decisions in journalism are about what to publish — or not.

People around the nation have been captivated by the heartwarming story of Carson King, the 24-year-old Iowan whose handmade “GameDay” sign asking for beer money prompted hundreds of dollars in donations. And then, when he decided to donate the money to the Stead Family Children’s Hopsital, hundreds of thousands of dollars poured in.

On Monday evening, Register reporter Aaron Calvin was assigned to interview King for a profile. On Tuesday, as he worked to write the story, he did a routine background check on King that included a review of publicly visible social media posts, a standard part of a reporter’s work on a profile. Calvin found two racist jokes that King had posted on Twitter in 2012. Calvin asked King about them, and he expressed deep regret.

That prompted a discussion involving several Register editors about how best to proceed: Should that material be included in the profile at all. The jokes were highly inappropriate and were public posts. Shouldn’t that be acknowledged at all to the people who had donated money to King’s cause or were planning to do so?

The counter arguments: The tweets were posted seven years ago, when King was 16. And he was remorseful. Should we chalk up the posts to a youthful mistake and omit the information?

Eventually, Register editors decided we would include the information, but at the very bottom of the story. We thought we should be transparent about what we had found, but not to highlight it at the top of the story or as a separate story. It was planned as a few paragraphs toward the bottom of the profile.

But the decision about how to use this information was preempted when King held a news conference to discuss the tweets and express his remorse. The news conference was covered by local television stations, which first reproted on the racist posts and King’s remorse. After these stories aired, Busch Light’s parent company announced it would honor its pledge to the children’s hospital but would sever future ties with King.

That happened before the Register published its profile of King, which was still in the editing process.

King also posted this statement on Facebook: “The Des Moines Register has been nothing but kind in all of their coverage, and I appreciate the reporter pointing out the post to me. I want everyone to understand that this was my decision to publicly address the posts and apologize. I believe that is the right thing to do.”

Reasonable people can look at the same set of facts and disagree on what merits publication. But rest assured such decisions are not made lightly and are rooted in what we perceive as the public good.