UPDATE, 07/23/19, 12:23 p.m. Eastern: Needless to say, the damage by Vance’s lie has continued to spread. On Tuesday morning’s MSNBC Live, former Maryland Democratic Congresswoman Donna Edwards ironically promoted this lie while knocking a Trump supporter as being, in the words of our friend at Mediaite, “misinformed by conservative outlets.”

Thankfully, host Stephanie Ruhle interrupted to say that she “[doesn’t] believe that’s true” and that FNC will indeed “air it.”

On Sunday morning, MSNBC legal analyst and former Obama-era U.S Attorney Joyce Vance offered quite the whopper that, if she had made such a mistake as a Fox News contributor, the CNN Media team would be tut-tutting for days on end.

Instead, Vance’s false claim that the Fox News Channel would not be airing Wednesday’s House hearings featuring former Special Counsel Robert Mueller drew thousands of retweets. And in her two MSNBC hits since the tweet totaling 18 minutes and eight seconds, none of the hosts or other panelists thought to call her out.

First, here’s the full tweet, which our friend Brian Flood at FoxNews.com pegged as having over “40,000 engagements before it was finally deleted”: 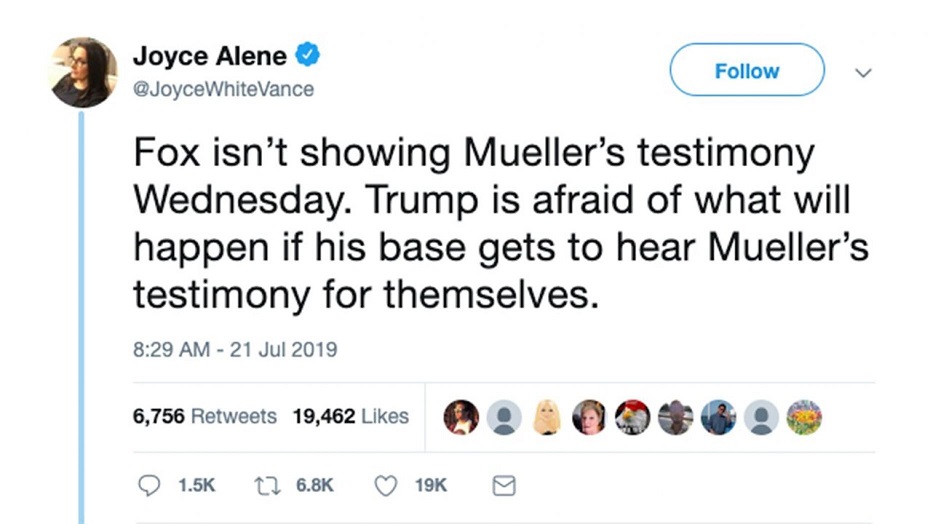 House later, Vance foolishly thought people would take her original tweet as sarcasm. Yes, really. Here was Vance trying to chalk this up to one big misunderstanding with most of us not getting her joke: 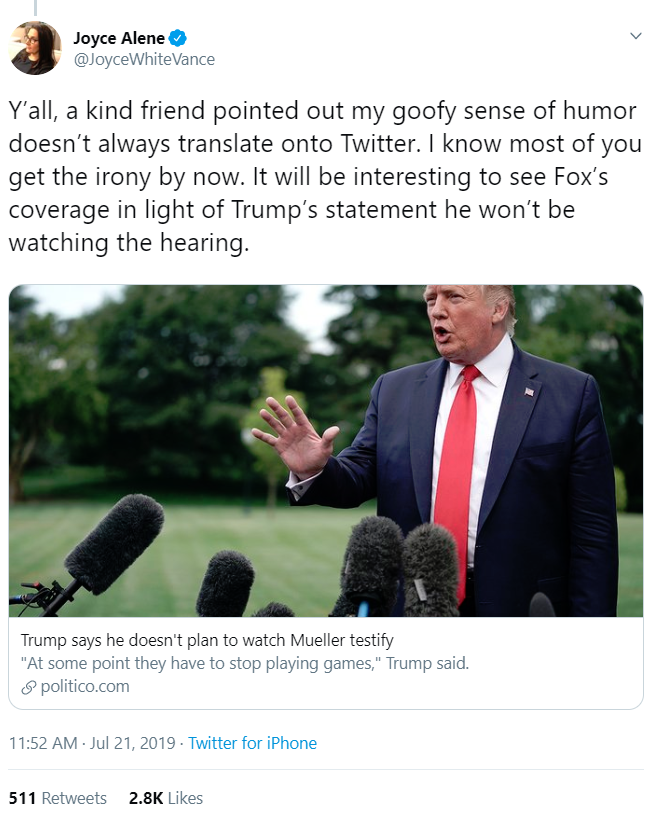 By early Sunday night, however, Vance deleted that first tweet, doubling down on her insistence that her attack on Fox News was misconstrued: “I’ve deleted an earlier tweet I intended ironically, but that some took as factual regarding Fox news coverage of Mueller’s testimony.  My apologies to anyone I confused. I don’t like to delete tweets but that seems a better course than unintentionally misinforming people.”

FNC will have gavel-to-gavel coverage anchored by Special Report’s Bret Baier and The Story host Martha MacCallum starting at 8:15 a.m. Eastern with a full slate of panelists, including Ken Starr.

Unfortunately, Vance’s lie spread as faux Republican strategist-turned-cable news shrill Rick Wilson pushed the claim on MSNBC’s Deadline: White House (before correcting himself on Twitter). And according to Mediaite, Fox News contacted MSNBC about Wilson's false claim and asking if it could be corrected on-air, but MSNBC reportedly refused.

In response, the Associated Press published a short item about Vance, which was picked up by ABCNews.com and newspaper websites ranging from The Charlotte Observer to The Houston Chronicle to The New York Times to the San Antonio Express-News to The Washington Post.

But yet, Vance appeared on Sunday night’s Kasie DC as part of a segment that lasted six minutes and 32 seconds plus an 11-minute-and-36-second panel discussion on Monday’s MSNBC Live with Stephanie Ruhle in which she never faced even a brief ribbing by a fellow guest or host about her falsehood.