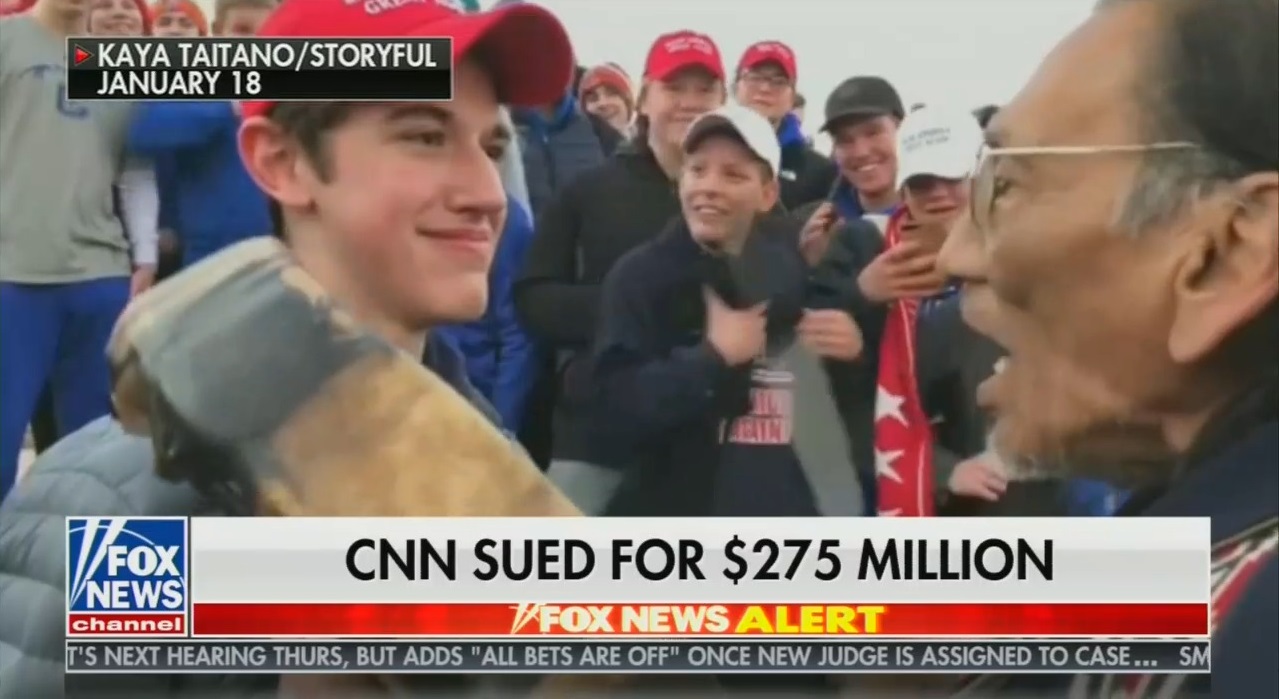 In an incredibly-detailed 58-page suit, the firms of L. Lin Wood and Hemmer DeFrank Wessels alleged CNN aired and published “at least four (4) defamatory television broadcasts and nine (9) defamatory online articles” in addition to a deleted tweet by CNN political commentator Bakari Sellers that called for Sandmann to be assaulted.

Of course, this CNN suit came almost a month after the firms filed a $250 million suit against The Washington Post.

The lawsuit didn’t waste time in starting to build a case against CNN, waiting until only point eight of the introduction to point out CNN’s “Facts First” campaign that launched only after it was “suffering from a public perception that it had deteriorated from being recognized as a source of hard news to being considered a mere echo chamber for manipulated and politicized commentary and ‘fake news.’” Yikes!

After highlighting CNN’s animosity toward President Trump, the suit stated that, in a one week span, “CNN brought down the full force of its corporate power, influence, and wealth on Nicholas by falsely attacking, vilifying, and bullying him despite the fact that he was a minor child” that was “[c]ontrary to its ‘Facts First’ public relations ploy.”

For points 14-16, the Sandmann legal team cited a few examples of the things CNN alleged about Sandmann and his classmates (click “expand”):

14. More specifically, CNN falsely asserted that Nicholas and his CovCath classmates were in a “racis[t]” “mob mentality” and “looked like they were going to lynch” the Black Hebrew Israelites who were merely “preaching about the Bible nearby” “because they didn’t like the color of their skin” and “their religious views,” and that Nicholas and his classmates then “surrounded” one of the Native Americans, 64-year old Nathan Phillips, creating “a really dangerous situation” during which Nicholas “blocked [Phillips’] escape” when Phillips tried “to leave” the mob, causing Phillips to “fear for his safety and the safety of those with him,” while Nicholas and his classmates “harassed and taunted” him.

15. In short, the false and defamatory gist of CNN’s collective reporting conveyed to its viewers and readers that Nicholas was the face of an unruly hate mob of hundreds of white racist high school students who physically assaulted, harassed, and taunted two different minority groups engaged in peaceful demonstrations, preaching, song, and prayer.

16. The CNN accusations are totally and unequivocally false and CNN would have known them to be untrue had it undertaken any reasonable efforts to verify their accuracy before publication of its false and defamatory accusations.

In regards to Native American activist Nathan Phillips, the suit blasted CNN for having “ignored Phillips’ obvious bias and provided Phillips a worldwide platform to spread his lies without any effort whatsoever to verify the accuracy of the inflammatory accusations Phillips was making against children.”

Further, Sandmann and his counsel eviscerated the Jeffrey Zucker-led outlet for going beyond serving as “an echo chamber for partisan views,” but something far more sinister: “CNN was a worldwide megaphone for an unmoderated and uninformed social media mob which had begun viciously attacking and physically threatening Nicholas in the hours preceding CNN’s initial reporting.”

In the final point of the next section, the suit offered more examples of things CNN falsely said about Sandmann and thus having left their journalistic ethics behind:

Between January 19 and January 25, CNN utterly disregarded the truth and falsely accused Nicholas of, among other things, “surrounding” Phillips, getting “right in [Phillips’] face,” and “block[ing]” Phillips’ “path” and “escape” from a “really dangerous” “mob” “wanting . . . to just rip [Phillips] apart” and chanting “build that wall” and “Trump2020,” as he and his classmates otherwise “harass[ed],” “taunted,” and “mock[ed]” Phillips — which were described as acts of “hate and racism.”

Eight more sections followed and ended with a “Damages” portion that included this point: “As a direct and proximate result of the False and Defamatory Accusations Nicholas is forced to live his life in a constant state of concern over his safety and the safety of his family.”

As this writer noted in a January 21 story for NewsBusters, CNN devoted 18 minutes and 16 seconds to the original version of events between Saturday and Sunday morning. The network also spent 13 minutes and 32 seconds Sunday night on the Covington kids and, without an admission of guilt, they began to change the story as the facts had emerged that Phillips’s claims weren’t exactly airtight.