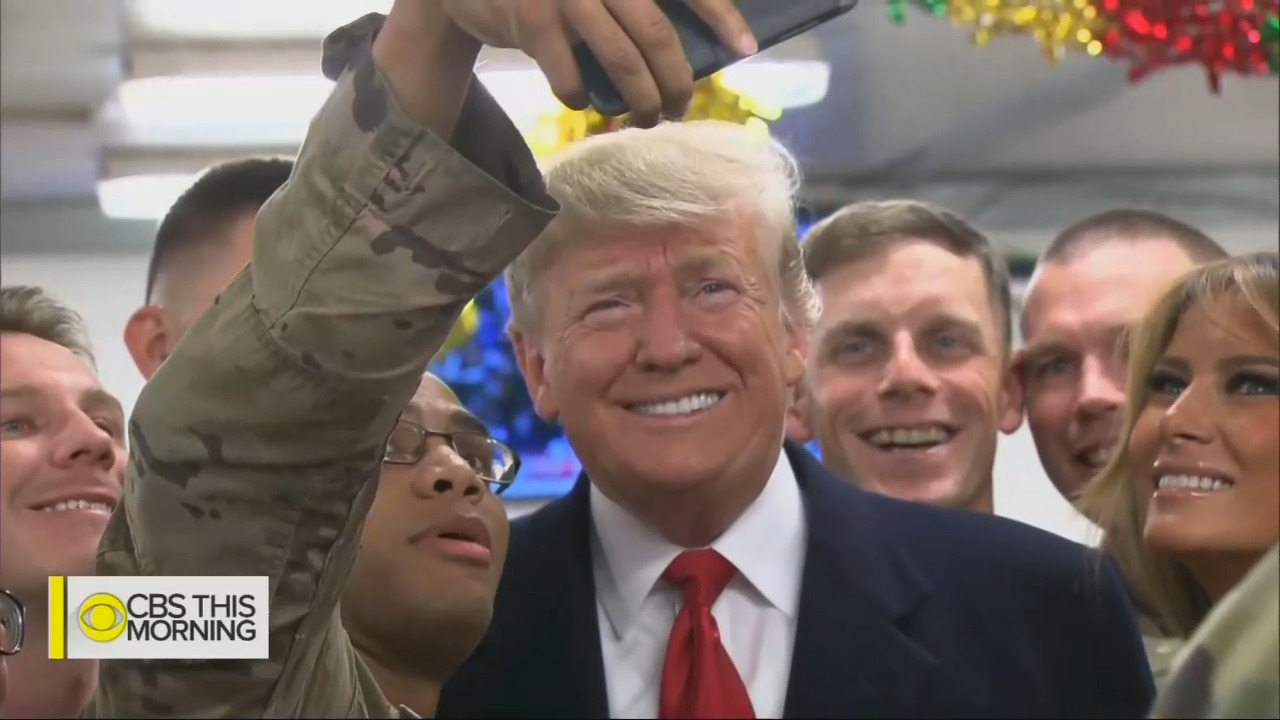 The story was updated as news developed over the course of the day. It presented facts that were accurate and context that was clearly relevant, as evidenced by the president’s own comments to American troops regarding Syria and U.S. military commanders. As for President Trump making the trip after criticism for not previously visiting a war zone, the Wall Street Journal’s own news story makes the same point.

Okay whatever, guys. You do you. “Context.” That’s the key word from these people. In other words, that’s bias. At any rate, they weren’t going to gush over Trump’s reception like The New York Times did with Obama, so it could have been worse. At least Trump didn’t show up with a turkey dinner with the press wondering (like they did of George W. Bush) if the turkey was real.

Talk about an embarrassment for The Washington Post. So would this mean that, on Wednesday, democracy died in darkness? Late Wednesday into Thursday, White House bureau chief/resident snark expert Phil Rucker and colleague Paul Sonne published a piece furthering the liberal media narrative that President Trump was shamed (read: by the press themselves) into visiting troops in combat, but only later completely rewrote it after a scathing Wall Street Journal editorial.

Jon Levine at The Wrap flagged down this embarrassing change, finding the original version due to the fact that the earlier version had been sent out to local news sites as part of The Post’s wire service.

The entire piece was blown up, but here’s the original lede pargraphs (click “expand”):

President Donald Trump touched down Wednesday in Iraq in his first visit to a conflict zone as commander in chief, a week after announcing a victory over the Islamic State that his own Pentagon and State Department days earlier said remained incomplete.

The president's visit, which was shrouded in secrecy, follows months of public pressure for him to spend time with troops deployed to conflicts in the Middle East and punctuates the biggest week of turmoil the Pentagon has faced during his presidency.

White House press secretary Sarah Sanders tweeted Wednesday afternoon, “President Trump and the First Lady traveled to Iraq late on Christmas night to visit with our troops and Senior Military leadership to thank them for their service, their success, and their sacrifice and to wish them a Merry Christmas.”

This hissy fit prompted The Journal editorial “The Constant Spin Zone” that took note of the original Post story and, after sharing those same paragraphs, the editorial board wondered: “[C]an anyone reading those opening two sentences wonder why millions of Americans believe Donald Trump when he tells them that he can’t get a fair shake from the press?”

“These reporters can’t even begin a news account of a presidential visit to a military base without working in a compilation of Mr. Trump’s controversies, contradictions, and failings,” The Journal added, concluding that while Trump’s rhetoric on the press goes too far, “such gratuitously negative reporting undermines the credibility of the press without Mr. Trump having to say a word.”

Sure, things change. We at NewsBusters update our stories as things change (especially when a host lands in hot water or is fired) and we make corrections.

But The Post appropriately added more quotes from Trump’s remarks at various stops in both Germany and Iraq, but when it goes beyond adding quotes to rewriting the story’s tone and tenor without a correction, that’s when there’s a problem.

President Trump greeted U.S. troops on an unannounced trip Wednesday to Iraq, where he defended his decision to withdraw forces from neighboring Syria and declared that the Islamic State is “very nearly defeated” while making his first visit to a conflict zone as commander in chief.

The president used his visit to al-Asad Air Base to amplify his call to draw down the U.S. presence in foreign wars and assert his personal influence over the military at a moment of tremendous turmoil at the Pentagon.

After months of public pressure for him to spend time with troops deployed to conflicts in the Middle East and Central Asia, Trump touched down at the joint U.S.-Iraqi base west of Baghdad after a secret flight from Washington.

Trump, who spent the holiday at the White House amid a partial federal government shutdown, departed Joint Base Andrews near Washington aboard Air Force One at 12:06 a.m. Wednesday. He flew in the dark of night in an attempt to preserve operational security.

Trump’s cover risked being blown by eagle-eyed social media users. A Twitter user in Germany posted that he had tracked an aircraft that could be Air Force One, while a British-based Flickr user later posted a photo of a plane bearing the presidential aircraft’s blue-and-white color scheme flying through clear skies over Yorkshire.

Trump traveled with a small group of journalists, who were ordered for security reasons not to report that he was in Iraq until he had finished delivering his remarks to the troops, roughly three hours into his visit to the base.

Asked why he decided to visit Iraq, Trump told reporters: “It’s a place that I’ve been talking about for many years. And many, many years, before it started, I was talking about it, as a civilian.”

Although Trump had previously addressed U.S. troops stationed overseas, including in Italy, Japan and South Korea, he had drawn criticism for not having visited those deployed to combat zones.

Trump said he considered the safety risks in making his first trip to a war zone.

The feel-good atmosphere of Trump’s visit belied the pitched tension in Washington between the president and the Defense Department.

Once again, it’s no wonder that Rucker has become such a beloved MSNBC figure and especially among the likes of Chris Matthews, Nicolle Wallace, and Brian Williams.