When it came to the major broadcast networks and their midterm election coverage, CBS didn’t pan out to have quite the bias the ABC and NBC offered, but there was still one journalist who came through in the clutch with plenty of liberal bias and that was, of course, CBS This Morning co-host and Obama donor Gayle King.

The liberal takes started coming early in the 8:30 p.m. Eastern half-hour as King outed the celebrity endorsements for Georgia Democratic gubernatorial candidate Stacey Abrams from President Obama, Will Farrell, and her friend Oprah Winfrey. As of this post’s writing and really since the results started to come in, Abrams was losing to Republican Brian Kemp.

King insisted that “we shall see” if “those celebrity endorsements make a difference,” but that issue was more broadly answered in the next half-hour when, just after 9:00 p.m. Eastern, it was declared that Republican Marsha Blackburn had won the Tennessee Senate race over Phil Bresden despite his support from Taylor Swift.

King and fellow co-host Norah O’Donnell took note of Swift’s endorsement, but it turned out that Swift’s luck in politics were as bad as her romantic relationships.

She also in that same hour lamented that the President and Republicans had success in the midterm elections enough though he was “scaring people”: “Clearly the President knows something that the rest of us don't, because what we're seeing so far is his strategy is working. Not talking about the economy, focusing on immigration, and really scaring people. Scaring people. That seems to be working.”

When the entire panel of co-hosts interviewed Republican Senator Lindsey Graham (S.C.), King offered a question from the left: “Senator, many people believe the President has misled the public about the danger of this caravan. What do you say about that, that it really isn't a caravan of people that are coming to this country?”

King returned to this theme with former Romney adviser Dan Senor, wondering if they could discuss Trump’s “tactics for just a second” because “[m]any people feel that he was very loose with the truth and what he was saying to the American people” since “[c]learly, but there are a lot of people that were turned off by that tactic.” And yet, there was not anywhere near the same disdain for liberals trying to instill fear in voters about losing their health care.

A few hours after she claimed hypocrisy in the President seeking unity while stumping with Rush Limbaugh for his final midterm rally, one final instance of bias came just past 1:00 a.m. Eastern as King scoffed at Bob Schieffer’s prediction that congressional “gridlock” would continue. 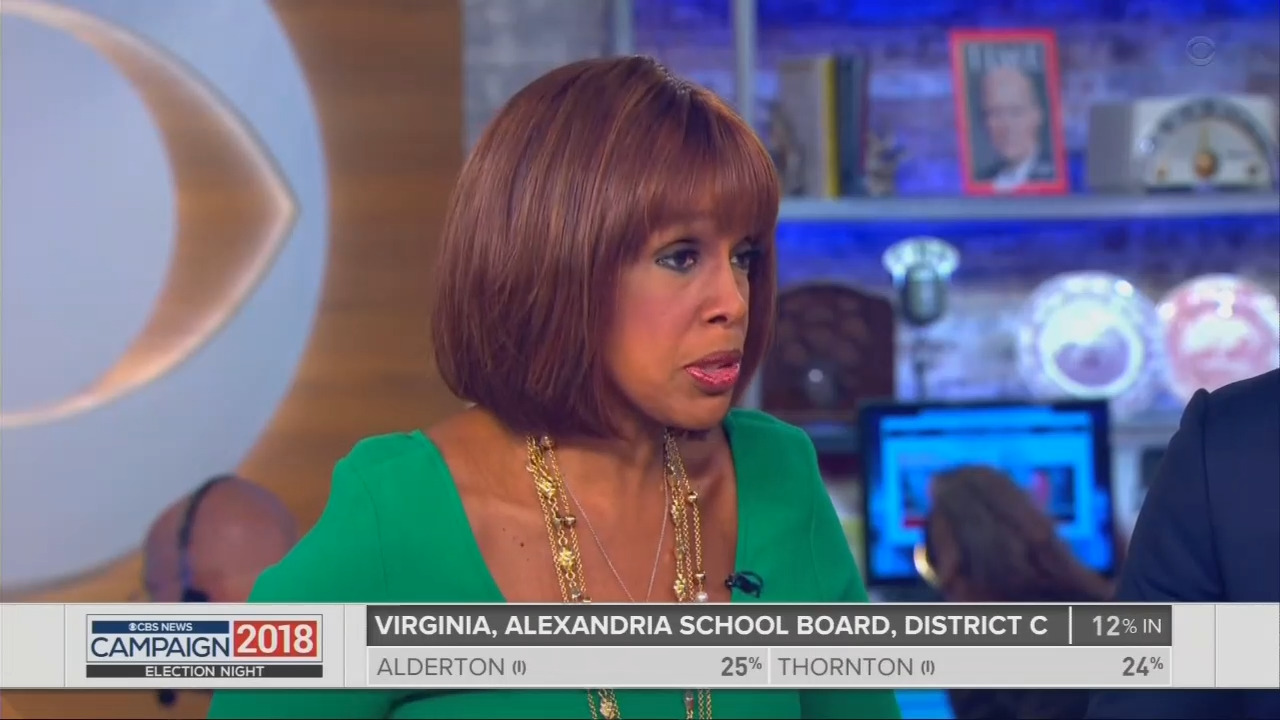 NORAH O’DONNELL: I mean, this is Stacey Abrams' bread and butter. She is not only an elected official there — election official there, but she knew how to turn out vote. She had a lot of people working on her behalf.

GAYLE KING: She had a lot of people working on her behalf and I met her this summer and did an interview with her and she said her strategy was not to hold a lot of big rallies, but to go door to door to go to areas where people did not know her, to physically knock people’s doors and to introduce herself and I think that strategy from what we see so far, and it is still early, a lot of people turned out for Stacey Abrams that you weren’t expecting. Of course, she had big names campaign for her. President Obama was there. Oprah, of course, was there. Will Farrell was there. Do those – do those celebrity endorsements make a difference? We shall see.

JOHN DICKERSON: This is again a big deal because think of who is being replaced, Bob corker, who worked with the Obama administration, who was critical of the President, now the President has a strong ally in Marsha Blackburn. She said during the campaign, I'm going to fight with President Donald Trump every step of the way to build that wall.

BIANNA GOLODRYGA: She was one of his first surrogates when he was running for President.

O’DONNELL: Right. Remember, this was the Taylor Swift state.

KING: Yeah. So much for Swift lift in that particular state. Earlier today, I think her opponent was counting on it and was really applauding Taylor Swift for coming out and said that the numbers were showing young people turning out for him. That, of course, is not the case, so it makes Marsha Blackburn first female senator in the state of Tennessee.

BOB SCHIEFFER: It's not early for me, Gayle.

KING: We're going to be here until 2:00. But we got lots of stuff — lots of things to cover, but Bob, what you were saying earlier, that the president, you know, even members of his own party, when Dan Senor was here this morning, he said that, you know, Paul Ryan had called the President and said, you know, Mr. President, maybe you should talk about economy. Clearly the President knows something that the rest of us don't, because what we're seeing so far is his strategy is working. Not talking about the economy, focusing on immigration, and really scaring people. Scaring people. That seems to be working.

KING: Senator, many people believe the President has misled the public about the danger of this caravan. What do you say about that, that it really isn't a caravan of people that are coming to this country?

KING: But can we talk about his tactics for just a second. Many people feel that he was very loose with the truth and what he was saying to the American people.

O’DONNELL: I don't think they just feel that. I think we know it, right?

KING: Yeah. I was trying to be diplomatic. Many people, Dan —

DAN SENOR: Some of us, yeah.

KING: Recently the President did an interview where he was asked, maybe in anticipation of this blue wave that clearly does not seem to be materializing at this point, but he was asked if he had any regrets over the last couple of years, if there was anything he would change and he said ‘well, maybe I would have a softer tone.’ Now that he has what appears to be a victory to his side do you expect his tone to become something — 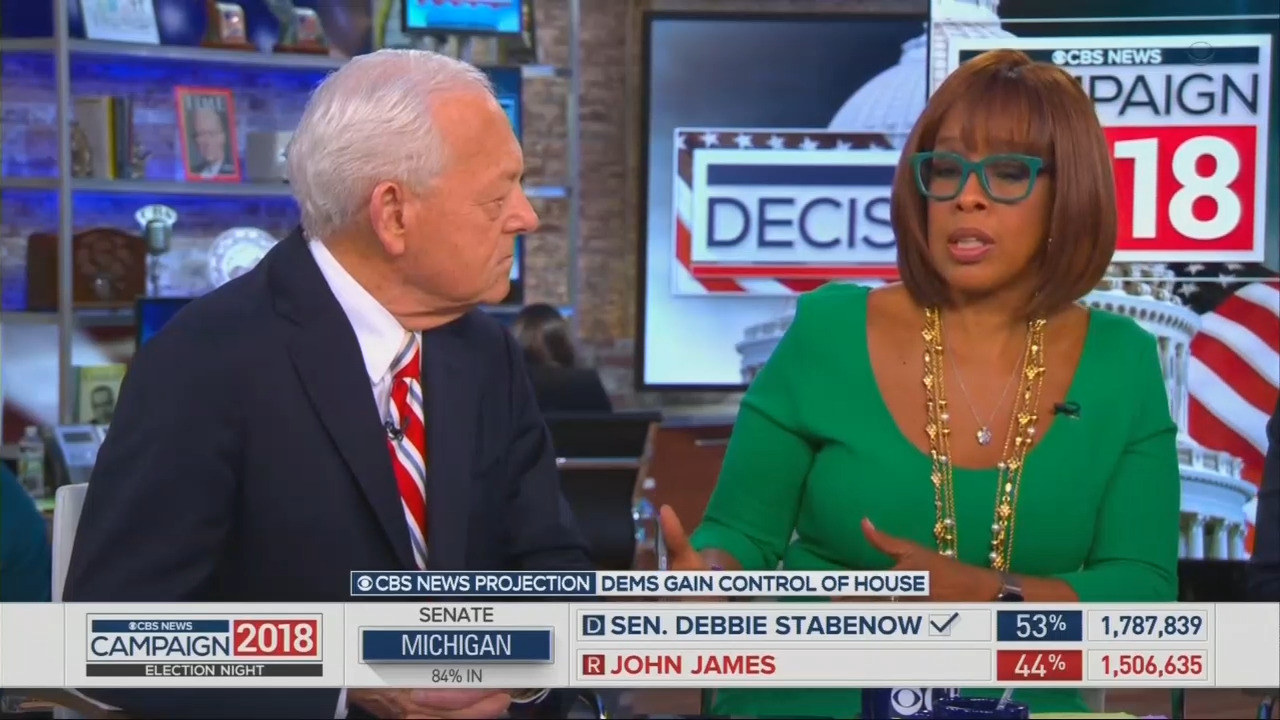 KING: — because, Dan, first he said he would have a softer tone and then closed with Rush Limbaugh in Missouri.

SCHIEFFER: So, you know, I think what's going to happen, I think congress is going to remain in a gridlock. I don't think much of anything is going to get done and I think it's going to be a while before it does.