Behold, the latest example from CNN Politics reporter Chris Cillizza showcasing why anyone can get a job in political journalism and punditry, no matter how flaming hot your takes can be. 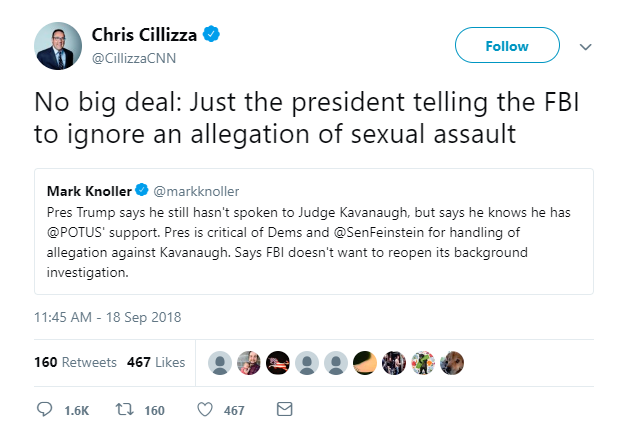 Well, let’s roll the tape and transcript of what the President actually said in the pool spray during the noon Eastern hour. First here’s the video:

And here’s the exchange between Trump and Cillizza’s own colleague, Jeff Zeleny:

Alas, that doesn’t exactly square with Cillizza’s ludicrous assertion. So much for Facts First. Also, one can add in this Friday piece from The Federalist’s Bre Payton and Cillizza is left up a river without a paddle.

Hours later during an NBC News Special Report on the President’s joint press conference with Polish President Andrzej Duda, chief White House correspondent Hallie Jackson correctly summed up Trump’s comments: “He says he has not spoken with Kavanaugh since that allegation came out with Christine Blasey Ford. The President also says that doesn't believe the FBI wants to investigate this as some Democrats are calling for.”

Democrats, of course, have been demanding that the FBI reopen the background investigation into Kavanaugh and, so far, the FBI declined to do so. There may be some questions about whether Dr. Ford is interested in seeing that investigation reopened, but the reality is right now, we simply do not know.

Chief foreign affairs correspondent Andrea Mitchell expressed some sour grapes about that, but that’s different than Cillizza’s false assertion. Regardless, it’s not that difficult, Chris.

Earlier in the day, Cillizza followed the rest of his colleagues in the liberal media in playing Republican strategist by suggesting that questioning Dr. Ford’s story pose electoral danger for the GOP: 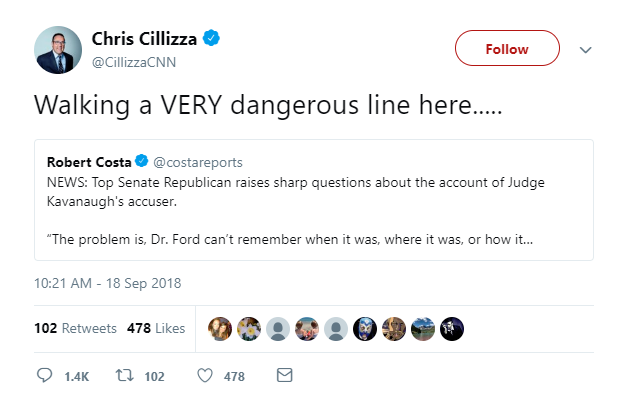 Over at The Daily Wire, the great Ben Shapiro blew this tweet to smithereens (click “expand” to read more):

Yes, clearly the dangerous line is asking questions – not destroying a man’s life based on uncorroborated accusations. None of this suggests that Ford is lying. It merely suggests that the Senate needs more information before convicting Kavanaugh in the court of public opinion. But asking questions is too much for many on the Left, who say that no hearing should be held, and demand that the FBI – a law enforcement agency tasked with investigating violations of federal law (none are alleged here) regarding an incident without time or place.

This is cynical garbage. And it actually undermines Ford’s credibility, which is truly tragic – the only thing that should undermine her credibility is, well, the credibility of accusations....But when the side promoting accusations states that questions are out of bounds, that signals shakiness in the accusations. And that’s the fault of Democrats and their media acolytes.