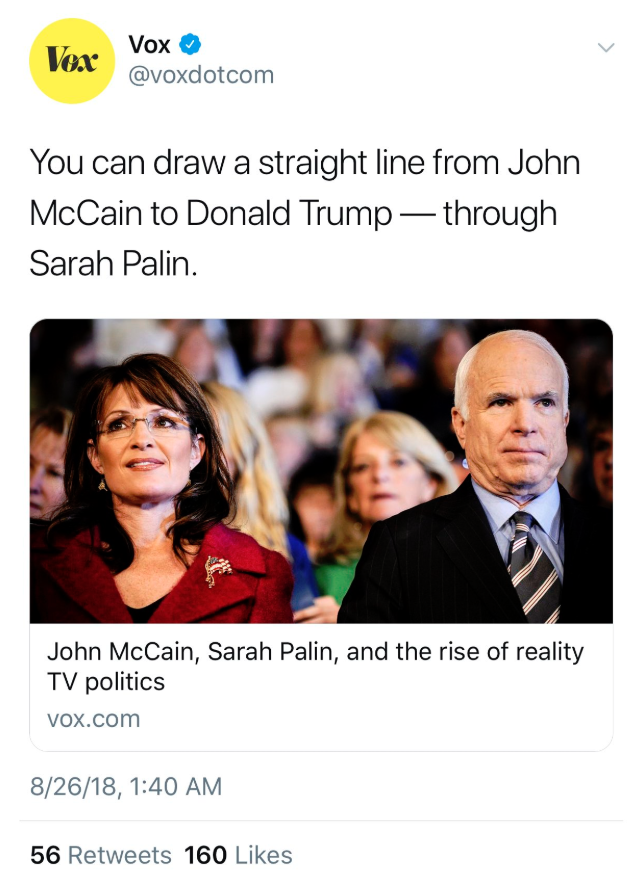 As for the piece itself (“John McCain, Sarah Palin, and the rise of reality TV politics”), that remains published and began as such:

The party of Donald Trump began almost 10 years ago to the day, when John McCain tapped Sarah Palin to join his ticket.

It’s one of the most important moments of McCain’s career. He proved willing to empower a demagogue when he thought doing so would improve his political fortunes, exactly the sin so many of his colleagues in the Republican Party have committed since Trump won their party’s nomination.

Palin’s big moment in front of a national audience was the first live vice presidential debate with Joe Biden. Her big opener was to ask the crowd: “What’s the difference between a hockey mom and a pit bull?” Her answer: “Lipstick.”

Oops. Palin actually used that line during her speech at the 2008 Republican National Convention. McGann corrected it, but the flub will live on thanks to the WayBack Machine.

On those two points alone, McGann was ripped on Twitter and check out our friends Amber Athey at the Daily Caller and Ryan Saavedra from the Daily Wire for more on the Twitter dunk squad.

McGann’s article served as yet another example of how the news media’s laudatory musings about McCain’s life cease whenever the topic of the 2008 election comes up (and especially how the media treated him at the time) (click “expand” to read more):

Even though McCain and Palin were bested by Barack Obama and Joe Biden, Palin inspired a slew of copycats, unleashing a political style and a values system that animated the Tea Party movement and laid the groundwork for a Trump presidency.

But he also betrayed his own values hoping to win a presidential election, and sent the Republican Party down the path to Trump.

Pretty quickly, though, Palin’s shortcomings started to show. She flubbed basic questions in interviews. Like: Why did you think Roe v. Wade was a bad decision? (Abortion was a central theme of Palin’s politics.)

McCain’s decision to pick her was called into question right away. How did McCain miss the signs that maybe she wasn’t up to the job?

There were quite a number factors, perhaps most chiefly the incompetence of the Hillary Clinton campaign or dissatisfaction with the Obama presidency, but why let those arguments get in the way of McGann’s bloviating?

McGann bitterly added later that “[w]hile McCain was credited with cutting off a woman at a rally who seemed to be saying something offensive about Barack Obama’s background, his running mate was on stages accusing Obama of ‘palling around with terrorists’” and that Palin “play[ed] straight into the hands of conspiracy theorists who doubted Obama’s citizenship.”

The Vox editor concluded that while Palin faded from the forefront of American politics: “She was replaced by a small army of candidates who picked up her mantle. More and more, campaigning became about resentment and identity — us versus them.” For McGann, it’s as if this isn’t the very foundation of the American left. Weird!

She later concluded in part: “He put this reputation on the line for Palin. She used it to gain credibility and a foothold in the national debate.”