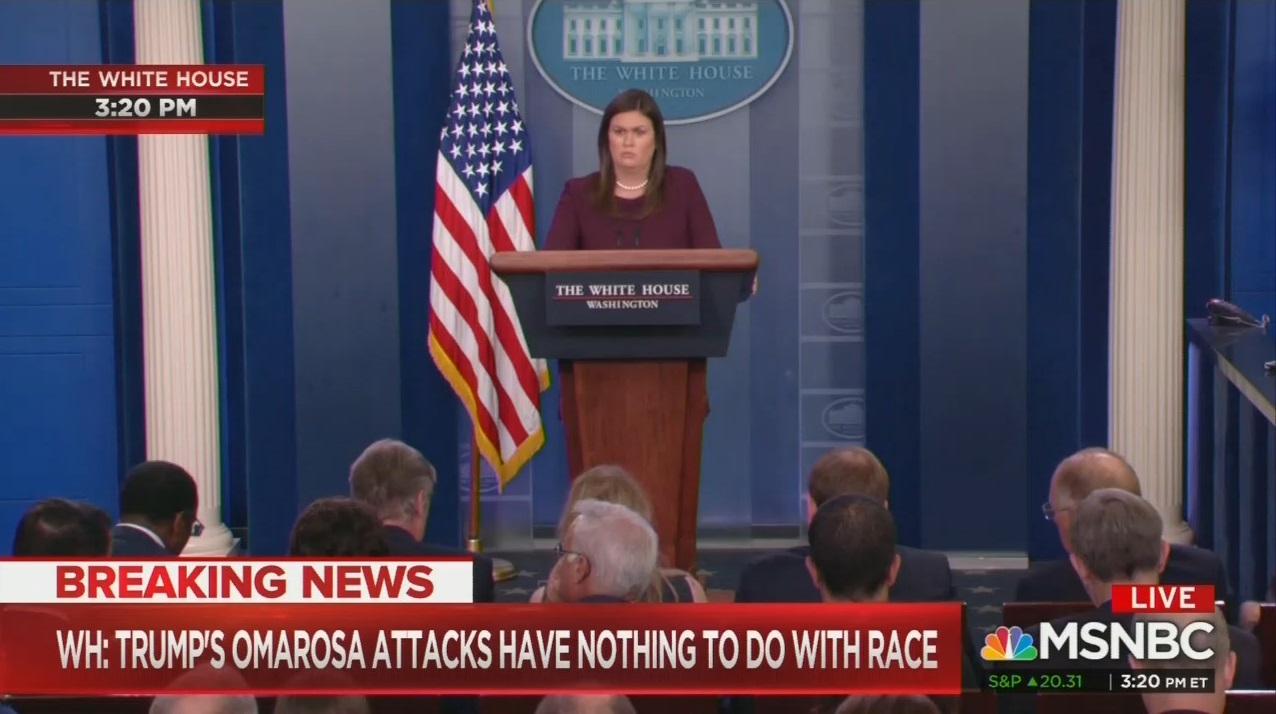 As part of the liberal media’s obsession with Omarosa’s salacious and largely unproven allegations against the President from her book tour, Tuesday’s White House Press Briefing featured nearly four times as many questions about Omarosa-related topics as all other matters.

Specifically, the breakdown was 39 Omarosa questions by 11 reporters to 10 questions for everything else from seven journalists (Afghanistan, Chinese influence in South America, ISIS, the Mueller probe, and Turkey).

The briefing began with Department of Defense officials updating reporters and the public for about 14 minutes on efforts to identify missing U.S. soldiers from the Korean War in the remains repatriated by the U.S. from North Korea on August 1 as part of a gesture by the North following the June 12 Singapore summit.

After their Q&A ended, Press Secretary Sarah Huckabee Sanders was almost immediately met with an onslaught of Omarosa questions.

“Sarah, we’ve heard from the president via Twitter on Omarosa, describing as ‘crazed,’ ‘a crying low life,’ a ‘dog.’ Is this a way for the president to talk about any American, let alone somebody that he hired and made the highest-ranking African-American woman to serve in his White House,” wondered ABC’s Jonathan Karl in the first question.

Karl asked two more questions and was followed by two each from Reuters’s Steve Holland and the AP’s Jill Colvin, then one by Politico’s Annie Karni.

Bloomberg’s Justin Sink was the fifth reporter called on and the first to break through the Omarosa obsession with four questions about Turkey as tensions between the two countries continued to escalate.

After Sink, the next three reporters brought the majority of the non-Omarosa questions with the Daily Caller’s Saagar Entjeti inquiring about the Mueller probe, Newsmax’s John Gizzi going back to Turkey, and The Washington Times’s Dave Boyer bringing up the tense situation in Afghanistan with the Taliban mounting a surprise offensive (where, of course, thousands of U.S. soldiers remain stationed).

NBC’s Kirsten Welker steered things back to Omarosa with six different questions, focusing on whether or not Sanders had heard or knows of whether the President had used the "n-word."

The Fox News Channel’s Kevin Corke had two points on Omarosa then the questioning moved one spot over in the seating chart to CBS’s Major Garrett, who blurted out six questions in his exchange with Sanders.

Voice of America’s Steve Herman snuck through this Omarosa obsession with a question about a Department of Defense Inspector General report about ISIS, but the discussion shifted right back to Omarosa with this false and long-winded rant from The New York Times’s Michael Shear (click “expand” for more):

Can I go back to the race question again? I get that — that you can cite things — statistics that might be positive statistics for policies the president has done vis-à-vis African-Americans and other minorities. What do you say to people who look at the pattern of comments that the President made specifically about African-Americans and feel like he is singling those folks out because of their race. Are they — are they missing something? Are they diluting themselves? What — what do you say to them? Because lots of people who look at the pattern and say yes, he’s — he says negative things about a lot of people, but there seems to be a particular pattern of singling out African-Americans and commenting in particular about their intelligence or lack there of and their looks.

If Shear would have consulted his own news outlet, he would have found a comprehensive list of people the President had insulted and there’s plenty of white folks.

Fox News Radio’s Jon Decker kept the Omarosa train moving after Shear had a follow-up. CNN analyst, Playboy writer, and Sentinel Newspapers editor Brian Karem also invoked Omarosa with two questions of his own, but he first spoke to Sanders about whether the U.S. will sanction Russians in light of the 12 recently indicted in the Mueller probe.

An unidentified female reporter had the final non-Omarosa question concerning Secretary of Defense Jim Mattis’s visit to South America as China had tried to further assert its influence.

With the latest MRC totals showing 124 minutes of Omarosa coverage on the broadcast network newscasts and Sunday shows (ABC, CBS, and NBC), this marriage between the liberal media and Omarosa has shown zero signs of slowing down.