On Monday afternoon, CNN political commentator and liberal Republican Ana Navarro ghoulishly paraphrased a quote by World War II-era pastor Martin Niemöller to equate embattled current and former Justice Department officials to those murdered by Adolf Hitler and the Nazis (aka President Trump) during the Holocaust.

Navarro’s referenced President Trump as “he” in her mock poem with James Comey, Andrew McCabe, Rod Rosenstein, and Robert Mueller making appearances in each stanza of the following tweet: 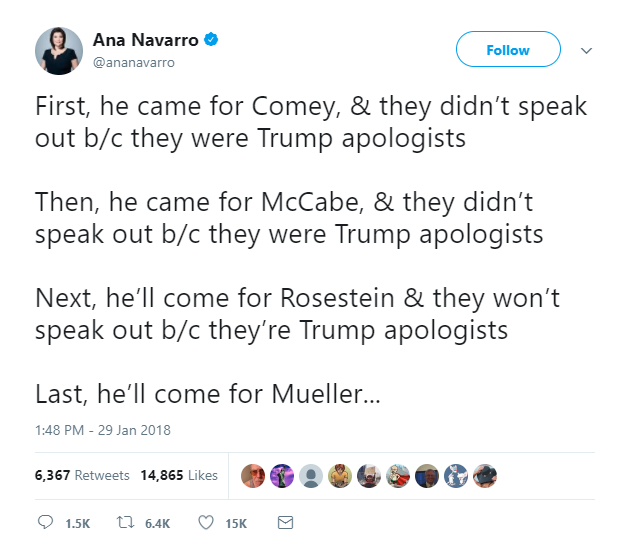 Yikes. Now, here’s the original quote that’s inscribed at the United States Holocaust Memorial Museum. Niemöller was a Lutheran minister who, despite being an earlry supporter, was jailed for opposing Hitler’s Nazi regime:

First they came for the Socialists, and I did not speak out —
Because I was not a Socialist.

Then they came for the Jews, and I did not speak out —
Because I was not a Jew.

Then they came for me — and there was no one left to speak for me.

Putting it all into context, that would make Comey the socialists prosecuted by Hitler, then McCabe as the “Trade Unionists,” Rosenstein as a Jew (which, turns out, he is), and then Mueller being the “me” stanza.

Navarro’s descent to liberal hack is quite something. She’s gone from reliable Republican pundit to establishment Jeb Bush supporter destroying his opponents to filling in (and fitting in) on The View alongside wacko co-hosts like Joy Behar.

These days, Navarro can be found on CNN whenever they need someone (supposedly) on the right to have a loud, emotional breakdown on live TV about how horrible President Trump is.

This demonic comparison between law enforcement officials to people murdered during World War II and Trump to Nazis is beyond the pale. Just imagine the reaction if a Fox News contributor did such a thing during the Obama years