The freak incident furthered what’s been a difficult week for the network after Friday’s flawed Trump/WikiLeaks story that yielded zero punishment because, well, CNN wants us to trust them since they mean well.

Trump had tweeted about Alabama Democrat Doug Jones’s victory in the Senate race and explained that he “originally endorsed Luther Strange” in the Republican primary because he correctly predicted that Roy Moore could “win the General Election.”

The Washington Post’s Erik Wemple quickly picked up on how poorly received and vague the initial excuse was, noting a few of them in his own item.

Cooper himself responded as well (once he presumably regained his account): 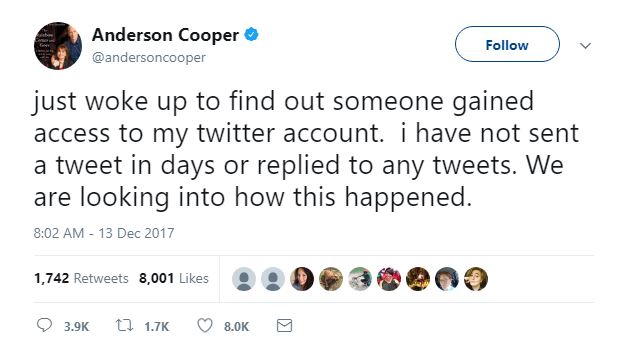 The day moved along and, as one would hope, CNN revealed more information. However, the problem was that the subsequent statement made little sense and only added more confusion (thus damaging the network’s credibility):

Geolocation tools confirm that the tweet in question was not sent from Anderson Cooper’s phone. Anderson was in Washington, and we have proof the tweet was sent from New York, from a phone belonging to his assistant. His assistant inadvertently left his phone unlocked and unattended at the gym early this morning, and someone took the phone and sent the tweet. His assistant, who has worked with Anderson for more than a decade, is the only other person with access to Anderson’s Twitter account.

Yeesh. So, to review, the first two sentences seemed to be both believable and straightforward since Cooper was in Washington on Tuesday to cover the Alabama race from the D.C. bureau.

The third sentence laid out a baffling scenario in which someone opened the smartphone of Cooper’s assistant at a New York City gym, found that it was someone who worked with Cooper, had access to Cooper’s Twitter account, opened Twitter, and composed the tweet.

It’s safe to say that this story wouldn’t pass the smell test if it were written for a movie or TV show. National Review’s Charles C.W. Cooke had it right when he admitted:

Not to sound like Alex Jones, but why would someone temporarily steal a phone owned by Anderson Cooper’s assistant, who was in a gym in a different city than Anderson Cooper? And how would that person know it was logged in to that Twitter account?

Regardless of whether CNN’s explanation is true or false, the network has a lot more explaining to do.

Oh, and by the way, it still has a lot of explaining to do about the massive error in its Trump/WikiLeaks story, such as the frequency and validity of the sources that supposedly burned them. But those concerns seem to only be viewed at CNN as bananas when they’re apples.