A ring-leader of the loony bin that is MSNBC just can’t let it go. On Wednesday’s Hardball, host Chris Matthews pedaled for the second time in nine days (and third time in as many days for the network) the devilish insinuation that Ivanka Trump and husband Jared Kushner are akin to the murderous dictator Saddam Hussein’s equally-horrific sons Uday and Qusay.

Additionally, Matthews referred to the Trump family as a modern Romanov family with family holding down jobs in the White House, which completely ignored past precedent (see Wilson, Roosevelt, Kennedy, Reagan, Clinton, etc.).

Seven minutes into the show, Matthews was discussing the removal of White House chief strategist Stephen Bannon from the National Security Council (NSC) with USA Today’s Susan Page when she admitted that “it's also a sign of how powerful Jared Kushner is” whose “portfolio he has is extraordinary.”

This led Matthews to laugh like a hyena as he dropped the Hussein comparison:

MATTHEWS: I know a couple. Uday and Qusay in the old days of Saddam Hussein.

PAGE: In an American administration.

MATTHEWS: Okay good. Okay, Howard, do you see it the way I see it, that this is a downgrade —

Roughly 40 minutes later, the tasteless analogy came up again when Republican strategist John Brabender ruled that “there’s a reset going on” inside the White House because they’re “very frustrated that their agenda is not going the way they thought.”

When Matthews asked who “they” were, both Brabender and far-left panelist Michelle Barnard replied the Trump children (along with Kushner). Matthews responded by knocking the Trump as “the royal Russian family” Romanovs.

Seconds later, he followed with the asinine link: “I don't see anybody who survives because it looks to me like the only ones surviving are family members. That’s all they got. Uday and Qusay here. That's all they've got.”

Here’s an exit question: If Hillary Clinton were elected and Chelsea played a role, do you think Matthews and Rachel Maddow would be saying she’s like Uday or Qusay Hussein? How about Hillary Clinton during the early ‘90s health care debate?

Here’s the relevant portions of the transcript from MSNBC’s Hardball on April 5:

CHRIS MATTHEWS: They took him out of the NSC. Bannon is down right now. He’s down.

SUSAN PAGE: He's not gone. He's still there, but definitely down and it gets kinds of the establishment pushing back. Right now, McMaster has a relatively conventional, traditional kind of security council that he is in charge of.

PAGE: And it's also a sign of how powerful Jared Kushner is. The portfolio he has is extraordinary. I can't think of a non-chief of staff, a non-national security adviser with the breadth of a portfolio that anyone has had — 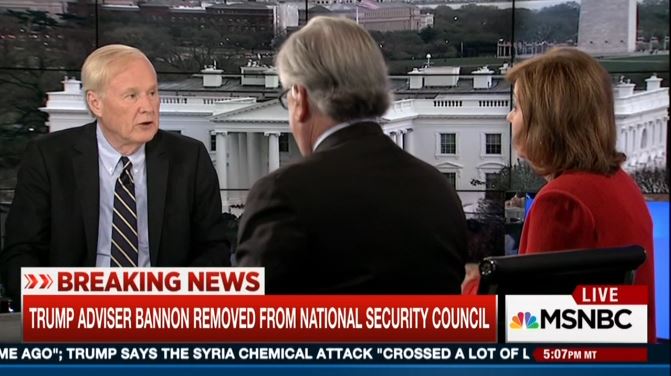 MATTHEWS: I know a couple. Uday and Qusay in the old days of Saddam Hussein.

PAGE: In an American administration.

MATTHEWS: Okay good. Okay, Howard, do you see it the way I see it, that this is a downgrade —

MATTHEWS: — because he screwed up with this whole thing with Cohen going over, saving this job, that apparently detailing him to bring in Nunes for that midnight briefing. It didn't work.

FINEMAN: Well, okay. It's one thing to maneuver around in Hollywood making movies, you know, which — which Bannon was dabbling in. It's another thing to be second echelon at Goldman Sachs and do deals and so on. Here, you're dealing with a guy like General McMaster, who is a past master at what goes on in this city, which is the accumulation and use of power in the national interest, especially for national security. That's as tough as politics gets inside of this city and what McMaster did is bide his time.

JOHN BRABENDER: The bigger story is there's a reset going on. I think the administration is very frustrated that their agenda is not going the way they thought. I think they believe and they learned

MATTHEWS: Who is the they by the way? Who is part of the existing —

BRABENDER: I think Trump is.

MATTHEWS: After Trump, who else besides him? Ivanka?

BRABENDER: Yeah and if you looked at the campaign, it's always the kids that show their frustration.

BRABENDER: But every campaign —

MATTHEWS: It's the royal Russian family.

BRABENDER: — every campaign does this in the first 60 days and what they're doing is saying, look, Steve Bannon, what is he? He's a strategist. Let's get him out there. Let's not put him inside the administration.

BRABENDER: They didn't get rid of him. They reassigned him to say, here’s where you got to understand. 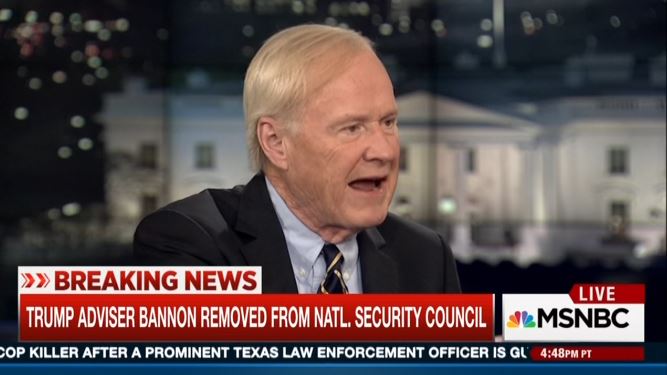 MATTHEWS: Okay, alright. Okay, back to Michelle. I know you've got Republican contacts. I don't see anybody who survives because it looks to me like the only ones surviving are family members. That’s all they got. Uday and Qusay here. That's all they've got.

BERNARD: Well, and at this — and General McMaster —