MSNBC Interviews Susan Rice as CNN Continues to Avoid Her Like the Plague, Dismiss Story as Fake 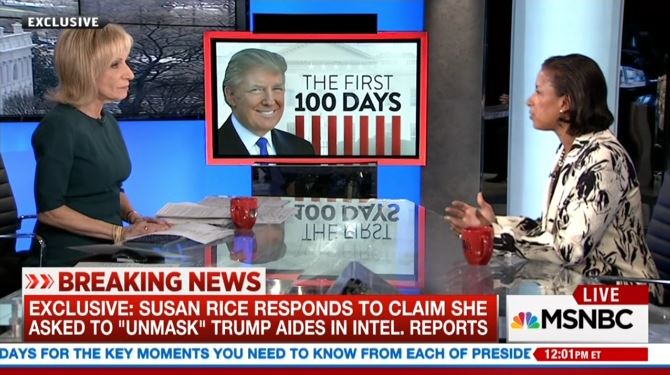 The Jeffrey Zucker-led CNN continued to make a fool of itself on Tuesday, downplaying the Susan Rice story of leaking/unmasking of intelligence dispatches as if it were the Zika virus. Hilariously, it’s attracted significant attention from not only the Fox News Channel but MSNBC.

NBC News correspondent Andrea Mitchell led her eponymous MSNBC program at noon Eastern with a 16-and-a-half-minute exclusive sit-down with Rice, featuring some tough questions but little in the way of follow-up or pushback.

CNN hosts Don Lemon and Chris Cuomo referred to the story as one they won’t “aid and abet” because it’s “another fake scandal” pushed by right-wing news, but MSNBC isn’t right-wing by any stretch.

CNN is having a rough time after The New York Times Magazine dropped a devastating profile of the network and boss Jeff Zucker, so we’ll leave them alone for the time being.

Mitchell began her Rice interview by admitting that it’s become “a firestorm...with the whole question of the Russian investigation, of the response by President Trump, and now these accusations against you” before opening up the floor for a long-winded response by Rice that amounted to nothing.

Mitchell followed up by asking about the leaking with a weak follow-up:

RICE: Absolutely — absolutely not for any political purposes, to spy, expose, anything.

MITCHELL: Did you leak the name of Mike Flynn?

RICE: I leaked nothing to nobody and never have and never would.

She noted an allegation in the Daily Caller story about Rice and intelligence alleged by House Intelligence Committee chairman Devin Nunes before spending a chunk of time prodding Rice with a keen interest for how the Russia/election investigation started.

Later, Rice channeled her former boss in Barack Obama as she awkwardly told Mitchell that she found out that Michael Flynn was an unregistered Turkish government agent “in the press as everybody else did” and not through her job as national security adviser.

The relatively-friendly interview concluded with Mitchell inquiring about President Trump’s tweet that he was spied on by the Obama administration:

MITCHELL: Is there truth to President Trump's claim on Twitter, exactly one month ago, early one Saturday morning on March 4th, that the Obama — that President Obama was eavesdropping on him at Trump Tower?

MITCHELL: Do you know how President Obama feels about the accusation that he eavesdropped?

RICE: I haven’t had that conversation with him.

MITCHELL: And finally, do you think we’ll will we ever get to the bottom of the Russian hacking?

To her credit, Mitchell interjected during the above portions of the interview to bring up the chorus of critics on the right side of the aisle, including calls for her to testify under oath on Capitol Hill:

MITCHELL: There has been Republican responses, now today. Senator Tim Cotton on the Hugh Hewitt Show called you the Typhoid Mary of the Obama White House. Your response to that?

RICE: You know, I have been called a lot of things by folks on the right that are unfair and disingenuous. This is not the first, so I won't get into each individual allegation or moniker that some might apply to me.

MITCHELL: Rand Paul is suggesting that you be subpoenaed to be received. Would you be willing to go to Capitol Hill.

RICE: You know, Andrea, let's see what comes. I'm not going to sit here and prejudge.

See, CNN, that wasn’t hard. Most media outlets don’t hold the feet of liberals to the fire. That being said, CNN’s ability to delegitimize this story and touting the spin from former Obama administration official Jim Sciutto as trustworthy couldn’t have been drawn up any better by the Obama team or the Resistance movement.

As Josh Jordan pointed out on Twitter, Rice has changed her story in just 13 days from claiming she knows nothing to arguing she didn’t “request” the unmasking of Trump aides for “political purposes.” That’s a story, but definitely not one most CNN personalities are interested in exploring.