WashPost Shrugs Its Shoulders at DeVos Being Heckled, Blocked from Entering School 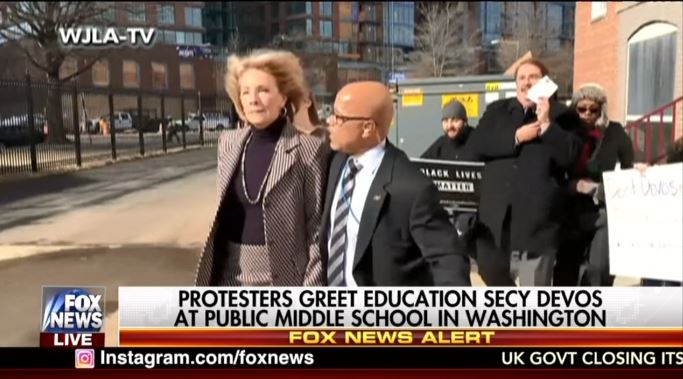 Commenting Friday afternoon on Education Secretary Betsy DeVos being berated and prevented from entering a Washington D.C. public school, a Washington Post article (via its blog The Fix) brushed it aside as merely example of how American politics have become “a powder keg” of partisanship.

Instead of suggesting protesters should have been arrested or highlighted the level of petulance by some liberals, writer Aaron Blake shrugged seeing as how DeVos’s nomination and confirmation “inflamed the passions and political activism of the political left more than the others.”

Blake cautioned readers that the video contained “vulgar language” as “the demonstrators blocked the staircase she was trying to use and shouted at her, DeVos returned to her car, escorted by an aide.” He also noted that DeVos used another entrance that was not blocked off so her visit could go on.

Blake continued passing the blame or any attempt at condemnation of the demonstrators:

What's remarkable about this is that we're talking about a Cabinet secretary here. Yes, there have been controversial nominees over the years, but the passion we've seen from the political left in going after Trump seems to be filtering down in an extraordinary way. DeVos, due to her support for school vouchers and her wealth (which she previously spread around to the senators who later confirmed her), has found herself singled out as someone the left will try to make life very difficult for going forward. And there are plenty of people nationwide who feel very strongly about public schools who could be spurred to action by DeVos's confirmation.

“As they were back then, these tensions seem to be higher at the start of a presidency. But we're now eight years further into the progression of social media — and it's even easier to make a moment like this last with an online display of protest and (quite literal) obstruction like the one on the staircase,” asserted Blake.

Capping off this piece encapsulating the definition of indifference, Blake wrote that “whether their appetite for protesting and obstructing remains over the long haul is an open question” seeing as how “scenes like the one Friday suggest a new political paradigm.”

“No, it doesn’t. It actually shows what thugs Democrats have become. But good try,” Fox News contributor Tammy Bruce tweeted.

The Heritage Foundation’s Lyndsey Fifield astutely pointed out with a heavy dose of sarcasm that “I’m sure this is exactly what the narrative would be if conservatives did anything like this to Arne Duncan.” The mood of National Review’s Charles C.W. Cooke was quite similar:

Arguably the main critique of DeVos is what liberals and others believe to be a lack of knowledge about the public school system. With that point, it’s amusing that liberals and far-left allies attempted to prevent DeVos from breaking that stereotype by visiting public schools (i.e. the institutions she’s now in charge of as the Secretary of Education).