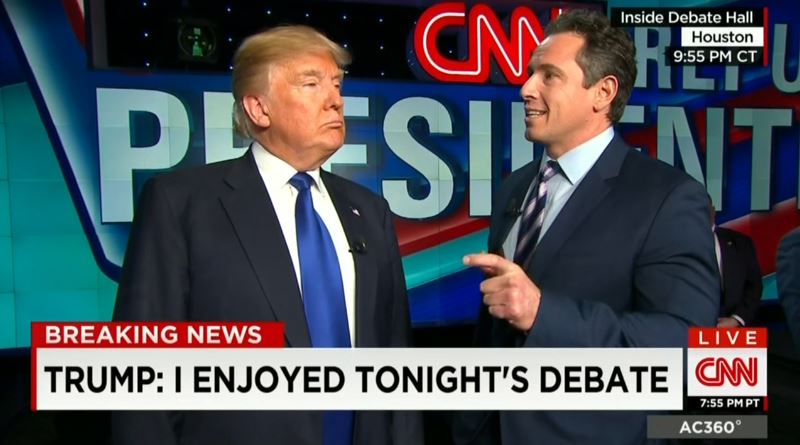 In a further sign that the liberal media is trying to determine the outcome of the 2016 Republican presidential primary, Thursday night debate host CNN found it beneficial to conduct two post-debate interviews with Donald Trump that totaled nearly 18 minutes in the first hour after it ended.

If that wasn’t enough, the network further pandered to Trump by allowing him back on set just after the 11:30 p.m. Eastern mark for a second interview that went on for another nine minutes and 39 seconds.

The first incarnation started with Cuomo pandering to him by wondering how he felt about being attacked by both Ted Cruz and Marco Rubio and “[w]hat did you think of that dynamic of having to take both of them on.”

Cuomo devoted a few moments to Rubio’s repeated blows he landed on the billionaire, but then backed off by lobbing softballs about whether he views the GOP nominating process as being over and only lightly pushed back on Trump’s assertion that he can’t release his tax returns due to him being under audit by the IRS.

The CNN host who excoriates conservatives on a near-daily basis began winding down part one by asking Trump how he felt about the performances of both Cruz and Rubio:

CUOMO: Do you think that people tonight had a chance to see the best that those two senators could bring to you and your ability to handle it. Is that your headline?

CUOMO: Did you anticipate both of them coming at you that way?

TRUMP: Yes I did. I really anticipated it. I was prepared for it. I thought would happen. They're desperate. I mean, what are they going to do? They're losing by massive amounts. Rubio hasn’t won anything. Ted won Iowa and that's under suspicious because of what he did to Ben Carson, so I mean, and he’s lost very badly since then.

The show went on for actual analysis and insight from their commentators, but Trump returned at the 11:32 p.m. Eastern mark in the spin room with AC360 host Anderson Cooper, Inside Politics host John King and senior political reporter Nia-Malika Henderson. 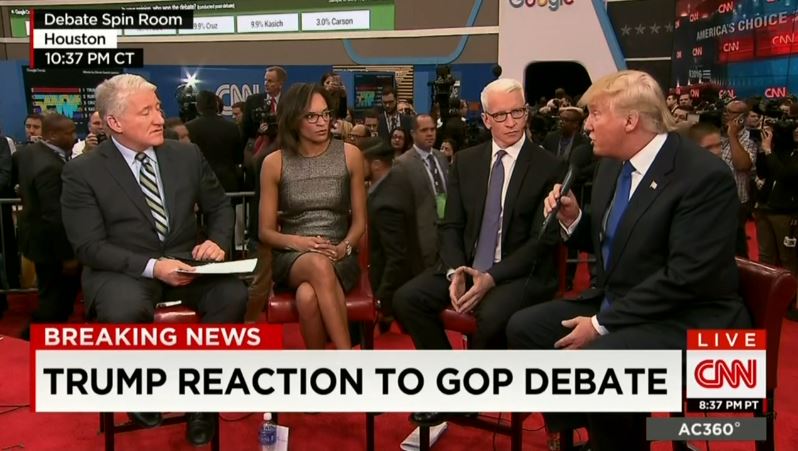 Once again, his tax returns served as the topic of banter as Trump repeated his same series of responses from what viewers saw only minutes beforehand but the three broke ranks to also inquire about the Supreme Court vacancy.

Not surprisingly, Trump praised his sister and her credentials as a federal judge (despite maintaining that he wouldn’t appoint her) along with Diane Sykes (who he’s also cited before).

After brief exchanges on ObamaCare and illegal immigration, part two came to a merciful conclusion as Cooper tossed back to his colleagues inside the debate hall where CNN political commentator Michael Smerconish bemoaned the intensity of the debate and suggested that it could have real negative ramifications for the GOP going into the November general election.