CBS: No Time for Latest on ObamaCare and VA, But Plenty Hype for Malia’s Birthday

On Thursday, all three broadcast news networks continued to ignore the latest outrage over ObamaCare and the Veterans Affairs scandal. Instead, CBS This Morning chose to file a 3 minute and 26 seconds report on what Malia Obama’s plans were for her 16th birthday on Friday.

Two audits released Tuesday produced scathing critiques of the health insurance marketplaces under ObamaCare while a top official at the Veterans Affairs Administration resigned Wednesday after refusing to take serious the early reports from whistle-blowers who brought the massive scandal to light. [MP3 audio here; Video below]

Meanwhile, CBS News senior White House correspondent Bill Plante’s piece in the 8:00 a.m. hour gushed over the possibilities of what Malia Obama and her family might be doing to celebrate the day on Friday and other recent milestones such as her first prom and learning how to drive. Exactly what the plans were to be were not disclosed as the lives and activities of the first children have traditionally been kept out of the media spotlight.

As the Media Research Center’s Scott Whitlock reported on Wednesday, ABC and NBC refused to cover news that a veteran was recently given approval to receive care from the VA while battling cancer. Unfortunately, the man passed away two years ago. CBS This Morning did cover the story, but only for a mere 22 seconds.

Further news from the VA came on Wednesday in the form of the resignation of its Office of the Medical Inspector (OMI) director. It was found that OMI did nothing to address the complaints of administration whistleblowers. According to The Washington Times, one example of inaction included an individual being held “at a VA facility for eight years before receiving a comprehensive evaluation.”

In addition, the three broadcast networks (and the two largest Spanish-language news networks) provided zero seconds of coverage regarding two audits from Health and Human Services Department’s Inspector which found that 2.6 million unresolved problems in the applications of those seeking health care on the federal marketplace (used in 36 states). Issues verifying citizenship or residency status, Social Security numbers and applicants who applied over the phone have placed federal and state marketplaces in the position that “may have limited the marketplaces’ ability to prevent the use of inaccurate or fraudulent information when determining eligibility of applicants for enrollment."

The complete segment transcript is transcribed below.

GAYLE KING: Tomorrow is not only America’s birthday but Malia Obama turns 16 and her parents are talking openly about what it's like to raise a teenager when your address is 1600 Pennsylvania Avenue. Bill Plante is at the White House with Malia’s first six years as first daughter and the road ahead. Boy, she's grown so much Bill, good morning. 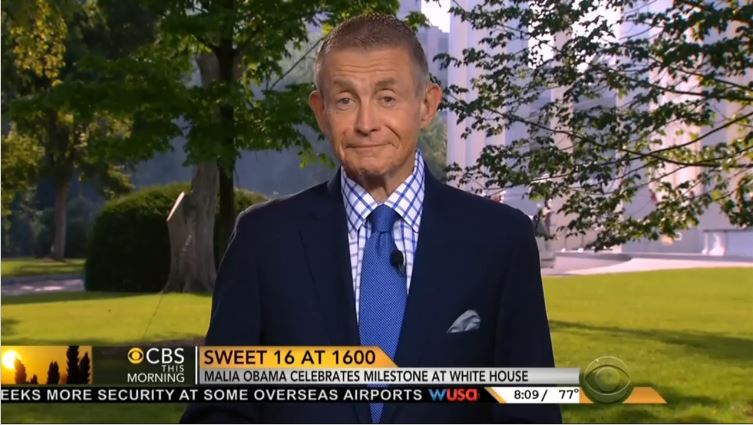 BILL PLANTE: Good morning, Gayle. Well that's right and here's a fun fact. Seven of the last nine presidents have had daughters who were teenagers during their time at The White House, so they've all had to deal with trying to give their children something resembling a normal life. But that's a challenge as President Obama admits.

PRESIDENT BARACK OBAMA: With the Fourth of July on Friday, also Malia's birthday, she will be 16, a little worrisome.

PLANTE: Worrisome because as anyone who has a teen knows, they have a mind of their own.

MICHELLE OBAMA: They want nothing do with us. They want normalcy and the White House isn't normal. So they go other places. And so I'll say don't you want to invite your friends over to watch a movie. She says no one wants to come here.

PLANTE: Malia's lived in the White House since she was 10. She's already been in politics since she was a toddler. But the Obamas have tried to keep their daughters' lives and rights of passage private.

BARACK: And you know, the truth of the matter is that they have more freedom than maybe we might have anticipated. So, they’re doing fine. Malia did have her first prom.

PLANTE: The president wouldn't say if Malia had a date but he does have one advantage over other fathers.

BARACK: I've got men with guns following them around all the time so that kind of makes me a little less nervous.

PLANTE: And tomorrow, Malia becomes eligible with for a learners permit.

MICHELLE: When we're out of here in a few years, you know they've got to be able to function as normal people and so driving is a part of that. So we're going have to figure that out.

PLANTE: American University’s Anita McBride spent many years as an aide to First Lady Laura Bush. She watched the Bush daughters grow up.

ANITA MCBRIDE: That’s an adjustment for teenagers to know that the Secret Service is there but they can be very unobtrusive. They also are given a fair amount of direction from the family to let the kids lead as normal a life as they possibly can.

PLANTE: And as McBride points out, despite the restrictions of White House living, there are some perks. 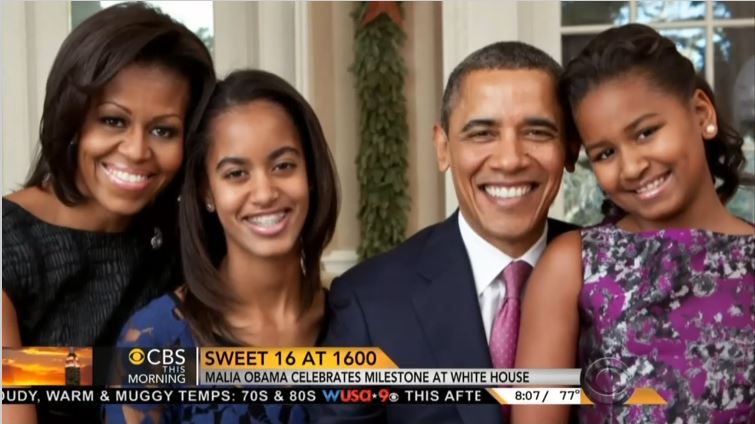 PLANTE: Well, that's a good list of possibilities, but the White House of course won't say what is planned for Malia's birthday. That is part of the usual cone of silence around the activities of Malia and her sister Sasha. But in the past, she's celebrated at Camp David and you know that’s not a bad place for a party, Gayle.

KING: No, I would think that would be a really good place except you heard the First Lady say nobody wants to come here to the White House.

ANTHONY MASON: It must be hard to invite your friends over and they have to go through a metal detector to play with you.

KING: To figure it out. But I remember when they first moved into the White House, the First Lady did many interviews and said we’re going to keep them as normal as possible. They have to do their own chores, make up their own bed. And so far it seems to be working.

MARGARET BRENNAN: It’s going to be interesting watching them grow up when they’re out of the White House what they end up doing.