Carol Costello took great offense to an ad from Ted Cruz showing the Texas senator humorously cooking bacon on a machine gun. Tuesday on CNN Newsroom, the host argued “we no longer respect our weapons. We forget that guns can actually kill.” Costello lamented “America’s cavalier attitude toward guns” and thought Cruz’s ad may have crossed the line.

Thankfully, the CNN personality invited two conservative guests – Ben Ferguson and Amanda Carpenter – to the program to discuss the issue, and they both disagreed with Costello’s contention. Carpenter, a former Cruz communications director, said this was simply “a fun video” and couldn’t see how “this reduces his credibility” when it comes to various gun and mental health issues.

Not satisfied, Costello asked Ben Ferguson once again if we “should have respect for our weapons.” Ferguson claimed people do have respect for their weapons, and noted that Cruz is “very articulate about mental health and issues of buying guns.”

Costello still failed to understand why Cruz would do such a thing. She responded to Ferguson by wondering: “[C]an't he just say he loves guns? Why did he have to fry bacon on his machine gun?”

CAROL COSTELLO: So, I wrote an op-ed about America's cavalier attitude towards guns. I know my op-ed made an impression. 225,000 users checked it out. I argued we no longer respect our weapons. We forget that guns can actually kill. If you want the facts to back that up, 100 children were killed in unintentional shootings between December 2012 and 2013, the year after the Newtown shootings, by the way. And there 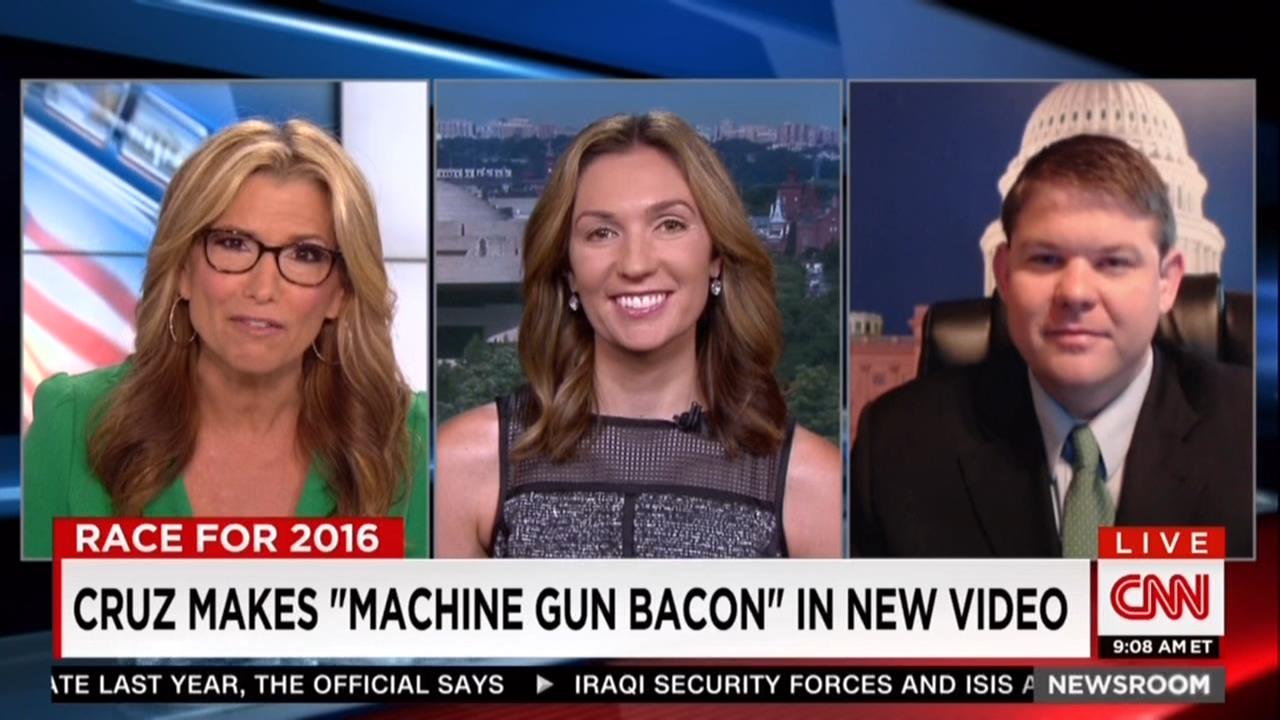 have been 1,104 accidental shootings so far this year. It's great Senator Cruz loves guns. Nothing wrong with that. But seriously, while a jury in Colorado decides whether James Holmes gets life or death for killing 12 people, should you fry bacon on your machine gun? Joining me to talk about this and more, Amanda Carpenter, former communications director for Senator Ted Cruz and a conservative writer. And Ben Ferguson, conservative radio talk show host and CNN political commentator. Welcome to both of you.

COSTELLO: Good morning. So Amanda, Ted Cruz is not alone in his zeal for zany video clips. I get it. Trump is entertaining so why not join in the fun? But at what point do you cross the line or is there no longer a line to cross?

AMANDA CARPENTER: Well I think Ted Cruz is very ready and able to talk about the gun control issue and doing something about mental health and reducing gun crimes, which I think, you know – that I would like to see debated on the Republican debate stage tomorrow night. It's an important thing to have and with Chuck Schumer coming out with new legislation, we should have a very respectful debate about keeping weapons out of the hands of the mentally ill who commit many of these mass shootings. So we can have that discussion. At the same time, you can have a fun video. I don't see [how] this reduces his credibility in talking about the legislation that we may need to pursue to strengthen the existing criminal record system.

COSTELLO: Shouldn't we have respect for our weapons, though, Ben?

BEN FERGUSON: We do have respect for weapons and I think –

COSTELLO: Frying bacon on the muzzle of a gun?

FERGUSON: Look, Ted Cruz has talked at gun violence very often. Bobby Jindal is another great example. He was in Louisiana and he talked about gun violence and mental health issues afterwards. Both these men are very articulate about mental health and issues of buying guns. But I think what you saw from Ted Cruz was Ted Cruz was having a little bit of fun. And shooting can be fun. He was also in a range. He was also shooting the right way. No one's criticized the way he handled that weapon in any capacity during that video. And I think he was saying, you know what, I love the outdoors, I like shooting, I like guns. I'm going to have a little fun with bacon at the same time. It was a spoof to get to know him and I don’t think it has anything – any issues to do with gun violence or not wanting to go tough on people that commit gun crimes or background checks or anything else.

COSTELLO: Seriously, though, Amanda, can't he just say he loves guns? Why did he have to fry bacon on his machine gun?