Jonathan Alter: There’s a ‘Vileness Gap’ Between the Republicans and Democrats

On Monday’s Last Word, Lawrence O’Donnell started his program with a panel discussing Mike Huckabee’s controversial comments about the Iran deal and the rhetoric in the Republican Party. Daily Beast columnist and MSNBC contributor Jonathan Alter had harsh words for the Republicans, claiming their rhetoric is far worse when compared to the Democrats: “[T]here's a vileness gap that is developing between our political parties.”

Alter added that his analysis really isn’t biased at all: “They don't talk this way in the Democratic party. That's not a partisan comment. It's an examination of the record and the rhetoric.” The MSNBC contributor also suggested that, pound for pound, Republican rhetoric is worse because one rarely sees Bernie Sanders “uttering a critical word” about Hillary Clinton.

The rest of the segment was devoted to mocking the Republican Party and hitting Mike Huckabee for his statement on Iran. Brian Beutler of the New Republic asserted there is a “perverse incentive for them [the Republican presidential candidates] to say really wild things” in order to get into the presidential debates. Beutler dubbed this phenomenon “the Fox News effect.”

O’Donnell suggested that the Republicans may have been emboldened by the fact that Donald Trump’s poll numbers refuse to decline: “And they may have learned a lesson in the denouncing of Trump and then seeing that his poll numbers aren’t really affected by what he said about John McCain.”

O’Donnell also opined that the rhetoric used by Donald Trump and others “seems to be rewarded by the Republican electorate when you look at the polls.” Beutler analyzed the situation:

The New Republic writer explained that “the people who buy into the shtick or the thing that he's doing right now are going to remember if the Republican Party mistreats him now or rebukes him too loudly.”

LAWRENCE O’DONNELL: And Brian Beutler, are we seeing both Trump lessons in this, say the most wild and provocative and distasteful thing you can and then under absolutely no circumstances must you apologize? 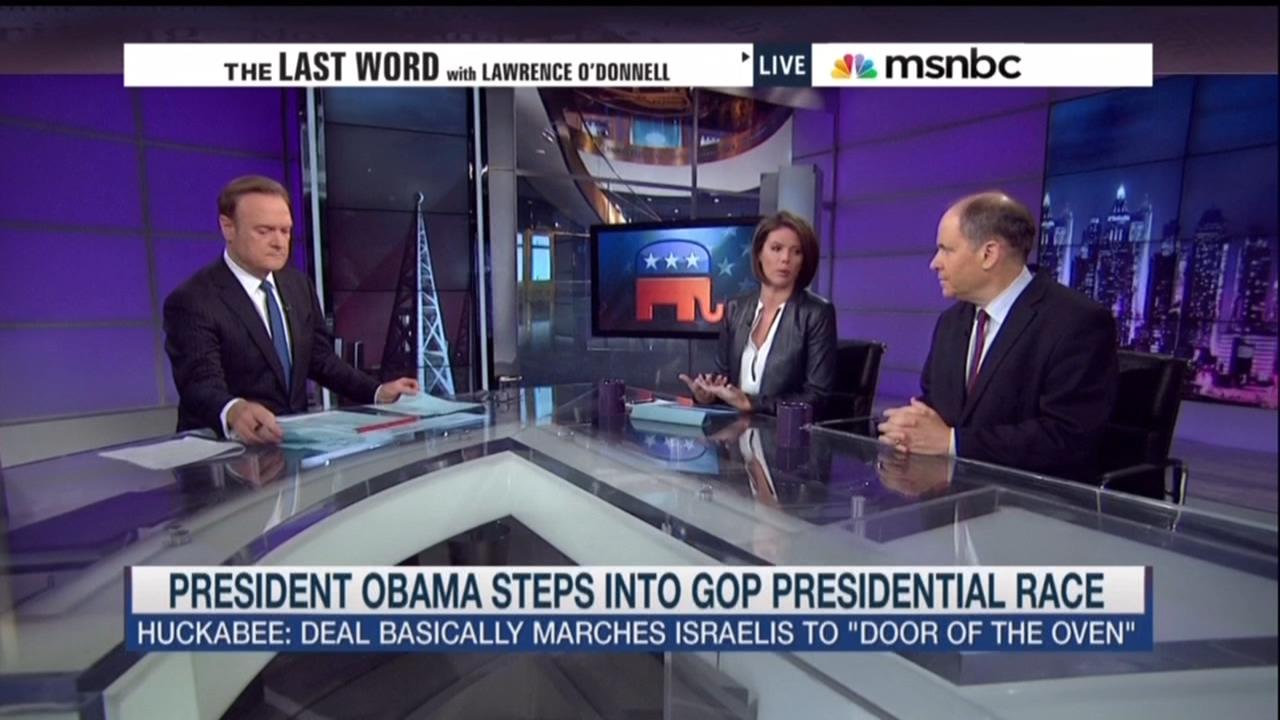 BRIAN BEUTLER: Yeah, I think Governor Huckabee has learned something from Donald Trump's surge in the polls, which is that if you hold your ground against the media, a faction of the Republican base will support you. I think you're also seeing sort of a Fox News effect where some candidates who aren’t polling as well as Donald Trump realize that they need to keep themselves in the top ten if they're going to be able to make it on to the debate stage, and that's creating a sort of perverse incentive for them to say really wild things.

O’DONNELL: And they may have learned a lesson in the denouncing of Trump and then seeing that his poll numbers aren’t really affected by what he said about John McCain. They denounced him for that.  But let's listen to what President Obama said about John McCain, too, today, because his answer on this was a long one. And it went beyond just what Mike Huckabee said. Let's listen to this.

PRESIDENT OBAMA: In fact, it's been interesting when you look at what's happened with Mr. Trump, when he's made some of the remarks that, for example, challenge the heroism of Mr. McCain, somebody who endured torture and conducted himself with exemplary patriotism. The Republican Party is shocked, and yet that arises out of a culture where, you know, those kinds of outrageous attacks have become far too commonplace and get circulated non-stop through the Internet and talk radio and news outlets. And I recognize when outrageous statements like that are made about me, a lot of the same people who are outraged when they're made about Mr. McCain were pretty quiet.

O’DONNELL: Jonathan, that's a point you made last week, what the president just said there about – when you were questioning the president’s birth certificate and Trump was doing all that crazy stuff directed at President Obama, a lot of these people were silent?

JONATHAN ALTER: They weren't just silent. They were kissing up to Donald Trump. They were actually going and visiting Donald Trump in his office and begging him for contributions. In Mitt Romney's case, they were holding a press conference with Donald Trump, talking about how proud they were to get his support. If you go back a few years in the case of Jeb Bush, there's a letter on record now of him to one of the swift boaters, the people who attacked John Kerry's patriotism, said he was not a war hero, and Jeb Bush writes him a letter, thank you for what you did in taking down John Kerry. That's the supposedly responsible person in this political party. Lawrence, there's a vileness gap that is developing between our political parties. That's not to say that Democrats haven't engaged in dirty politics over the years. But in the recent period, the Democrats pound for pound, you don't even see Bernie Sanders uttering a critical word about Hillary Clinton, his main opponent. They don't talk this way in the Democratic party. That's not a partisan comment. It's an examination of the record and the rhetoric.

LAWRENCE O’DONNELL: Yeah, and Brian, this talk seems to be rewarded by the Republican electorate when you look at the polls.