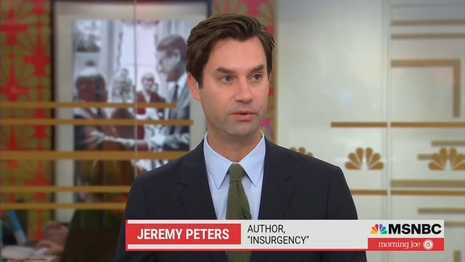 With the House January 6 committee hearings over for now, New York Times’ reporter Jeremy Peters unloaded on a familiar target in Monday’s Business section -- the conservative press -- in “As Jan. 6 Panel’s Evidence Piled Up, Conservative Media Doubled Down.”

But first, Peters told us how to think about January 6 by citing two wholly objective outlets, CNN and MSNBC (where Peters contributes):

After the Jan. 6 committee’s final summer hearing last week, the talk on the sets of CNN and MSNBC turned to an intriguing if familiar possibility about what might result from the panel’s finding. The case for a criminal prosecution of former President Donald J. Trump, many pundits said, was not only justified but seemed more than likely given the evidence of his inaction as rioters sacked the Capitol.

If that felt like déjà vu -- more predictions of Mr. Trump’s looming downfall -- the response to the hearings from the pro-Trump platforms felt like something new, reflecting the lengths to which his Praetorian Guard of friendly media have gone to rewrite the violent history of that day.

Midway through this “media memo” came this odd, parenthetical insertion:

(The writer of this article is an MSNBC contributor.)

Peters is quite proud of it too. He wrote an entire book (Insurgency) condemning Donald Trump and conservative media, especially Fox News, whose popular morning show Fox & Friends is “three hours of sex and red meat,” while crowing about the “incredibly dedicated professionals at MSNBC.”

All that makes Peters less than trustworthy when he goes after conservative media.

Part of the right’s message to Trump supporters is, in effect: You may have initially recoiled in horror at what you thought happened at the Capitol, but you were misled by the mainstream media.

The dissonance can be perplexing. The same Fox News hosts who were imploring the president’s chief of staff to intercede with the president or risk “destroying his legacy,” as Laura Ingraham put it in a text to Mark Meadows on Jan. 6, now accuse the mainstream media of exaggerating the events at the Capitol.

Well, the hosts couldn’t well accuse the press of exaggerating things before the press’s coverage revealed itself over time, could they? Perhaps they watched and could see how things were being exaggerated?

The narrative often relies on kernels of truth about incomplete or inconsistent statements from law enforcement and witnesses -- a typical occurrence in any investigation so sprawling -- that Mr. Trump’s allies in the media then magnify.

To demonstrate, Peters tastelessly went after a cancer patient.

As Capitol Police officers are portrayed as something less than heroic, new heroes emerge. One story that went viral on the right in the last week was about a 69-year-old woman, Pam Hemphill, who recently began a 60-day prison sentence after pleading guilty to trespassing in the Capitol on Jan. 6. The way Ms. Hemphill was portrayed on the Clay Travis and Buck Sexton Show, which replaced Rush Limbaugh’s program in many markets, was typical of the sympathetic messages conservatives heard about her. The hosts described her as a victim -- a grandmother and a cancer patient who was given an unreasonably harsh sentence.

While the liberal media march in Trump-loathing lockstep, Peters complained of the “uniformity” of the pro-Trump press.

Part of the effectiveness of the conservative media’s defense of the former president’s conduct on Jan. 6 has been its uniformity. Few have broken ranks to question his actions as the committee made its case….