The New York Times, which pushed special investigator Robert Mueller’s investigation into Trump-Russia collusion that proved illusory, is reveling in the acquittal of a Democratic operative in special counsel’s John Durham inquiry (an inquiry into “conspiracy theories,” according to Savage) into the possibly corrupted origins of Mueller’s own investigation. 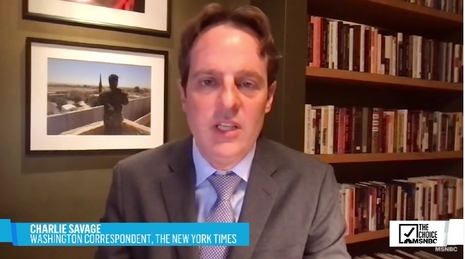 The same Times that threw around “collusion” willy-nilly and defended the now-discredited Steele dossier, commissioned by Democratic operatives on behalf of the Hillary Clinton campaign, is now hammering Durham for the audacity to get to the bottom of this plot.

Legal reporter Charlie Savage pointed to the acquittal in Thursday’s edition. The headline suggested Durham was on a puzzling wild-goose chase: “Sussmann Acquittal Raises Question: What Is Durham Actually Trying to Do?”

Savage made it strangely personal from the start. While Mueller was a quiet hero to Times reporters, Durham is painted as buffoonish.

Even before 12 jurors voted to acquit Michael Sussmann of lying to the F.B.I. in a rebuke of the Trump-era special counsel, John H. Durham, supporters of Donald J. Trump were already laying the groundwork to declare that the prosecutor won despite losing in court.

What really mattered, they essentially claimed, was that Mr. Durham had succeeded in exposing how Hillary Clinton framed Mr. Trump for the “Russia collusion hoax,” an argument that ricocheted across the right-wing news media.

Indeed, Mr. Durham did show that associates of the 2016 Clinton campaign -- a victim of Russian hacking -- wanted reporters to write about the allegations that played a role in the case, an obscure theory about the possibility of a covert communications channel between Mr. Trump and Russia. But most news outlets were skeptical, and the F.B.I. swiftly discounted the matter.

When Attorney General William P. Barr assigned Mr. Durham in May 2019 to investigate the Russia investigation, he did not have a reputation for pursuing iffy cases or for using law enforcement power to publicize politically fraught information.

Savage had a problem with Durham putting context in his filings.

In both cases, Mr. Durham festooned the narrow charges with copious information, heavy with insinuations that there had been a conspiracy to trick people into thinking Mr. Trump colluded with Russia -- not by “deep state” officials, but by associates of Mrs. Clinton’s 2016 campaign.

Yet Savage himself previously used partisan context when it made Trump look guilty of collusion, listing vague circumstantial suspicions of Trump as if they somehow justified the years-long investigation:

Mr. Trump had said flattering things about Russian President Vladimir V. Putin, kept bringing on advisers with ties to Russia, had financial ties to Russia, publicly encouraged Russia to hack Mrs. Clinton, and at his nominating convention, the party dropped a plank that called for arming Ukraine against Russian-backed rebels….

In Thursday's story, he kept railing against Durham’s filings with an unsympathetic nit-picking technique the paper never applied to Mueller’s actual case.

Some of the most explosive Durham filings themselves have proved to be misleading or tangential to the case.

Savage’s bottom line? Mueller was classy, Durham was not.

There are limits to any equivalence. The F.B.I., as Mr. Horowitz indicated, had a sound factual basis to open the Russia investigation; Mr. Barr’s mandate to Mr. Durham appears to have been to investigate a series of conspiracy theories.

Last December, Savage was desperately defending the Trump-Russia investigation by downplaying the import of the discredited Steele dossier.