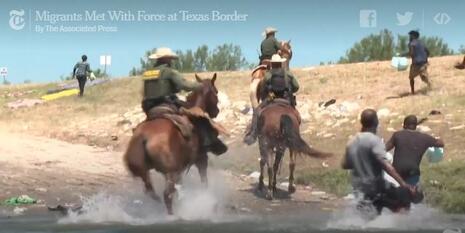 On Monday, a slanted New York Times story by Eileen Sullivan criticized the Biden Administration from -- you probably guessed it -- the left for its border policy. Worse yet, Sullivan used her piece “Haitian Migrants File Lawsuit Protesting Treatment by Border Patrol” to peddle a now-infamous, misleading photo that leftists used of Border Patrol agents on horseback to claim they were “whipping” Haitian migrants back in September at the Rio Grande at the Texas border with Mexico.

The photographer himself, Paul Ratje of AFP, is on record saying the picture was “misconstrued.” But we don’t hear from him in Tuesday’s Times story. Rather, Sullivan seemed inclined to believe the worst about the Border Patrol so she could support the ridiculous migrants’ lawsuit (click “expand”):

Mirard Joseph was bringing food to his wife and child, he said, when a Border Patrol agent on horseback in Del Rio, Texas, “lashed at” him with his reins and dragged him by the collar toward the Rio Grande, which in that region separates the United States from Mexico.

The treatment of Mr. Joseph, an undocumented immigrant who was seeking asylum but has been deported, and other Haitian migrants by agents in September is the subject of a federal investigation after President Biden described it as “outrageous” and promised that “there will be consequences.” The union representing the Border Patrol agents has defended them, saying they were merely doing their job as thousands of migrants crossed into the small border town.

The migrants’ side of the story was laid out for the first time on Monday, in a lawsuit against the government filed in U.S. District Court for the District of Columbia. By Mr. Joseph’s telling, the agent in a widely published photograph let go of him when the horse appeared close to trampling him.

Again, Sullivan never mentioned the photographer, who, again, has pointed out that the men were trying to run around the horses:

The lawsuit alleges that the Biden administration knew an influx of migrants was coming but deliberately made no humanitarian preparations….

The photographs of Mr. Joseph and others in Del Rio prompted criticism of the Biden administration’s response to the thousands of Black migrants who were crossing illegally into the United States at the time, many in search of asylum.

Regardless of the outcome of the suit, the plaintiffs’ accounts could become part of the investigation into the agents’ actions in Del Rio, which is being conducted by Customs and Border Protection’s Office of Professional Responsibility....

While we're at it in terms of what Sullivan omitted, she also left out the key fact that the Department of Homeland Security’s inspector general has declined to investigate the claims:

In Mr. Joseph’s case, the photographs prompted accusations that the agents had used their reins as whips -- a claim that is central to the investigation. According to Mr. Joseph’s complaint, that was indeed what happened. But the Border Patrol union has said the agents were twirling their reins, as they are trained to do, to deter people from getting too close to their horses and therefore avoid injuries.

Several plaintiffs said they “saw officers on horseback using reins as whips against people” in the Rio Grande….

The article conveniently left off any backstory, such as the answer to the question: How did Haitians come to be under the Del Rio International Bridge in Texas in the first place?

The Haitian nationals were traveling from South America, where many had lived since 2010 (following a major earthquake that destroyed much of their capital, Port-au-Prince). With their work permits expiring in Chile and then Mexico, their plight suddenly became American’s problem when they massed at the U.S. border, while Chile and Mexico took no blame.