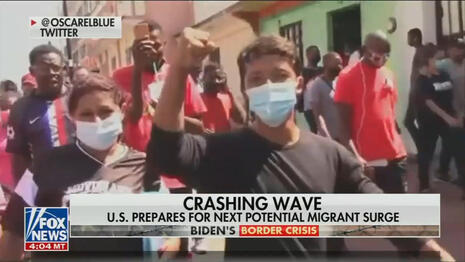 Here’s one for the “No Good Deed” file. Natalie Kitroeff reported for Wednesday’s New York Times about a Good Samaritan turned bad in Matamoros, Mexico. A local preacher took in would-be migrants to America while they languished on the Mexican side of the border (thanks to Donald Trump), but Kitroeff portrayed him as “The Good Samaritan Whose Kindness Wore Thin.”

The online headline deck laid out in slanted terms a family squabble with ideological tones:

After Pastor Evicts Nearly 200 Migrants, His Brother Welcomes Them All -- An evangelical minister in a Mexico border town had let dozens of migrant families live in his church. When he ousted most of them, his brother across the way invited the outcasts into his home.

(You have to read closely to realize why there were 200 migrants in the church in the first place.)

Over the summer, as migrants rushed into the Mexican border city of Matamoros, a local pastor lost his patience.

The pastor, Víctor Barrientos, had already invited dozens of asylum seekers to live in his church, believing that was his religious duty as an evangelical Christian. But suddenly, it seemed to him, there were too many people. His guests were messy, he said, and “out of control” -- and then, just as the pandemic’s third wave hit, they started getting the coronavirus.

So one day in late June, the pastor kicked out nearly 200 people. He let a few families stay.

So, the migrants walked across the street to “the pastor’s estranged brother Joel,” who “packed as many people as he could into his one-bedroom home.”

“I don’t know,” Joel Barrientos said, squinting at his brother’s nearby church, “what happened to him.”

….after former President Donald J. Trump forced people to stay in Mexico while they applied for refugee status, the city became a place where migrants waited out their fate for the long haul.

For a paper that criticizes the United States so much, it certainly hold America to higher moral standards. Mexico’s neglect for migrants in their midst doesn’t even merit a full sentence. (It’s a common omission at the paper.)

The best estimates suggest that there are many hundreds, if not thousands, of migrants still holed up in the city, and they receive little help from the Mexican authorities.

One has to read between the lines to see that the preacher’s brother now posing as saintly was at fault for letting his brother’s church facilities get overwhelmed.

As the pastor traveled outside of Matamoros and then made a run for mayor this year, he left the church in the care of his brother Joel Barrientos, 49. As more people started flowing into Matamoros, the brother and his wife, Gabriela Violante, let the ranks inside swell past 200.

Kitroeff spun so hard trying to stay wholly on the side of Team Migrants that she ditched every other principle the Times has spent 20 months upholding. Try and imagine in any other context a Times reporter chiding a subject for insisting on masks and coronavirus testing:

When the pastor returned to the church on a Sunday in April, he said he was appalled by what he found. The fridges were “full of bugs,” and “no one was wearing masks,” he recalled.

He made everyone take a coronavirus test, and after the positive results started rolling in, the pastor said enough. He’d let a small group stay, but everyone else needed to get out.