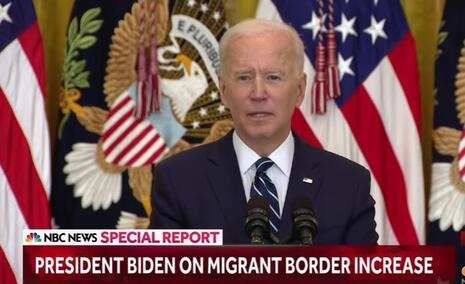 The New York Times front page on Saturday reported that “Biden Is Facing New Pressures Over Migrants.” So far so good.

But the Times painted the Biden-encouraged rush to America’s southern border, where the number of apprehensions have hit record levels, as less an actual crisis and more of a worrisome political issue for Democrats, with the threat of Republicans (yes) “seizing” on it and hurting Biden and Democrats in the 2022 congressional elections. They also downplayed Biden’s campaign promises that helped fuel the border crisis.

Whenever Republicans threaten to be on the popular side of an issue, the Times can be relied on to dismiss it as “cynical” political posturing.

President Biden came under renewed pressure on immigration Friday as the authorities said the largest number of migrants in years arrived at the border with Mexico last month and a federal judge in Texas raised legal questions about an Obama-era program that protects young immigrants from deportation.

Border officials encountered migrants nearly 6,000 times a day last month for a total of 188,829, the largest monthly number in recent history, according to data released on Friday by Customs and Border Protection. The surge is happening at the height of the hottest summer months, when the flow of people seeking entry into the United States usually abates.

....Friday’s developments underscored the difficult and often politically fraught choices that Mr. Biden is confronting on immigration, an issue that could shape his legacy and help define the moral center of his presidency.

Everyone knows that “Republicans pounce,” but now the Times' algorithms can even predict the pounces!

But Republicans are ready to pounce the moment he does that, eager to portray Mr. Biden as an open-borders president who pays too little attention to the crime, health and economic consequences of his immigration policies.

Again, the Times tried to paint Biden as a victim of cynical Republican politics, while downplaying the actual migrant misery on the ground.

Ending use of the rule might satisfy critics in Mr. Biden’s own party, but it could also lead to new scenes of crowded, unsafe Border Patrol stations and fuel conservative talking points before the midterm elections in 2022.

Meanwhile, Biden’s critics on the left are free to take the moral high ground.

His administration is the target of several class-action lawsuits accusing officials of violating the rights of asylum seekers. The president’s liberal allies in Congress are increasingly impatient. And world leaders are speaking out. This summer, Filippo Grandi, the high commissioner for refugees at the United Nations, called on Mr. Biden to end the use of Title 42, saying it flatly violates the 1951 Refugee Convention and international refugee law.

Senator Ted Cruz, Republican of Texas, introduced a bill last week that would block the White House from lifting the public health rule. And other Republicans have seized on the decision about the Title 42 restrictions to attack the president.

Shear and Sullivan can’t accept the possibility that Republicans (and all citizens) have good reasons to want the country to have a secure border.

The attacks by Republicans are part of a broader effort by the party to use the border to gain an advantage in the midterm elections. Their message: Mr. Biden and Democrats have made Americans less safe by overturning Trump-era immigration rules. They have also blamed Mr. Biden for the increase in migrants trying to get into the country after he promised a more compassionate immigration system during the campaign.