Taylor Lorenz and the False, Censorious ‘Hall Monitors’ of The New York Times 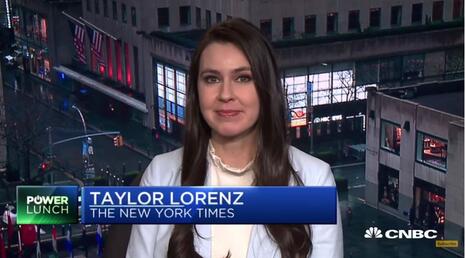 Yet most of the paper’s tech reporters don’t seem to be fans of unmonitored speech. Not content with their own long-time colleagues being canned for past wordcrimes, Times tech reporters are determined to play politically correct hall-monitor to the rest of the world, finding and squelching any avenue for thoughts that may offend their woke sensibilities, even if they have to make things up.

Taylor Lorenz is one of the paper’s journalists waging a strange war on internet privacy, shown by her obsession with eavesdropping in on famed venture capitalist and Netscape co-founder Marc Andreessen in his talks on Clubhouse, even immaturely bragging about getting a “Clubhouse burner account” to spy on Andreessen in a chat room.

Lorenz’s controversy involved her false claim that Andreessen used “the r-slur” during a Clubhouse virtual meeting on February 6, discussing how a stock-chat forum on Reddit escalated the price of GameStop stock. (Not acquainted with the “r-slur”? Read on.) Lorenz tweeted (and later deleted):

“@pmarca” is Marc Andreessen’s Twitter handle. Lorenz even offered a screenshot of the Clubhouse group, in condemnation of everyone who failed to rebuke him.

The only problem? Andreessen didn’t use the "r-slur" -- “retard” -- and the person who did was merely identifying what members of the Reddit group ironically call themselves -- “the retard revolution.”

After being caught in the lie, Lorenz couldn’t even correct or apologize properly, stating only that she appreciated the “clarification.” Lobbing such a smear should be mortifying to any journalist with a sense of shame.

Left-wing iconoclastic journalist Matt Taibbi concentrated his fire on Lorenz’s idiocy, but expanded his targets, noting how such “deviance-hunts…are now a central concern of media reporters like Brian Stelter and Oliver Darcy of CNN, Ben Collins and Brandy Zadrozny of NBC, and Mike Isaac, Kevin Roose, Sheera Frenkel, and Lorenz at the Times.”

Journalist Glenn Greenwald, a consistent critic of government surveillance issues, focused on the Times trio of “hall-monitor reporters” going after the private messaging app Signal (the same one, as noted above, that was praised in a personal privacy context by the Times). Take it way, Glenn:

But the worst of this triumvirate is the NYT’s tech reporters, due to influence and reach if no other reason. When Silicon Valley monopolies, publicly pressured by Rep. Alexandria Ocasio-Cortez (D-NY) and other lawmakers, united to remove Parler from the internet, the Times’ tech team quickly donned their hall-monitor goggles and Stasi notebooks to warn that the Bad People had migrated to Signal and Telegram. This week they asked: “Are Private Messaging Apps the Next Misinformation Hot Spot?” One reporter “confess[ed] that I am worried about Telegram. Other than private messaging, people love to use Telegram for group chats -- up to 200,000 people can meet inside a Telegram chat room. That seems problematic.”

These examples of journalism being abused to demand censorship of spaces they cannot control are too numerous to comprehensively chronicle.