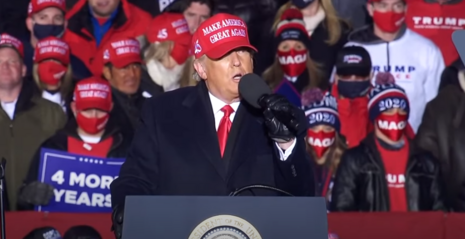 Bennett opened with the textual equivalent of a campaign video for a former Democratic president the media clearly misses, in the service of pushing Joe Biden over the finish line.

Kindness. Humility. Responsibility. These traits were once “the definition of manliness,” Barack Obama told a crowd on Saturday, campaigning in Flint, Mich., for his former running mate, Joseph R. Biden Jr.

Though he did not name him, it was clear whom the former president was talking about.

“It used to be being a man meant taking care of other people, not going around bragging,” Mr. Obama said.

The words were evocative, and not simply because Mr. Obama followed them by knocking down a slick three-point basketball shot at the gymnasium of the high school where the drive-in rally was held -- a kind of viral punctuation mark to his thoughts on manliness.

In two days, Americans will take their shot, making a choice between two presidential candidates who resemble vastly different case studies in what a man, even in 2020, should do or be.

After mocking Trump, Bennett embarrassed herself over the Biden-Harris ticket.

On the other end of the spectrum, or perhaps somewhere in the middle, is Mr. Biden, a “Dad-like” figure, as the philosopher Kate Manne put it, who has vowed to be America’s protector through a dark period, with some combination of strength, empathy and compassion.

He chose Kamala Harris, a barrier-breaking woman, as his running mate. He has surrounded himself with strong women. “He’s offering a more paternalistic type of masculinity, in that you can be a strong leader but still be compassionate and empathetic,” said Marianne Cooper, a sociologist at Stanford University who studies gender and work.

The online headline deck over this "news analysis" was more explicit: “Dishonesty Has Defined the Trump Presidency. The Consequences Could Be Lasting. -- Whether President Trump wins or loses on Nov. 3, the very concept of public trust in an established set of facts necessary for the operation of a democratic society has been eroded.”

Born amid made-up crowd size claims and “alternative facts,” the Trump presidency has been a factory of falsehood from the start, churning out distortions, conspiracy theories and brazen lies at an assembly-line pace that has challenged fact-checkers and defied historical analogy.

But now, with the election two days away, the consequences of four years of fabulism are coming into focus as President Trump argues that the vote itself is inherently “rigged,” tearing at the credibility of the system. Should the contest go into extra innings through legal challenges after Tuesday, it may leave a public with little faith in the outcome -- and in its own democracy.

The Democrats themselves tore at the credibility of the system after Trump had the bad manners to win a fair election in 2016, marching in the streets, pressuring Electoral College members to go rogue, and calling for hopeless recounts in three Midwestern states. But somehow Trump is the only one trying to sow doubt about the democratic process?

During his final weekend of campaign rallies, Mr. Trump continued to sow doubt about the validity of the election, making clear that he would deem any outcome other than victory for him to be corrupt. At a rally in Philadelphia, which has a sizable nonwhite population and a Democratic-led government, he asserted that the city would falsify the results….

The nightmarish scenario of widespread doubt and denial of the legitimacy of the election would cap a period in American history when truth itself has seemed at stake under a president who has strayed so far from the normal bounds that he creates what allies call his own reality. Even if the election ends with a clear victory or defeat for Mr. Trump, scholars and players alike say the very concept of public trust in an established set of facts necessary for the operation of a democratic society has eroded during his tenure with potentially long-term ramifications.

So Trump’s not just ruining the country now, he’s already ruined its future as well? That’s a pretty harsh claim for a front-page “news analysis" to make.