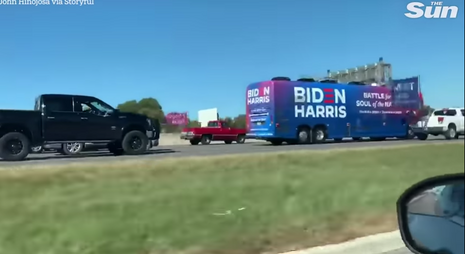 Vehicles with Trump flags halted traffic on Sunday on the Garden State Parkway in New Jersey and jammed the Mario M. Cuomo Bridge between Tarrytown and Nyack, N.Y. Another pro-Trump convoy in Virginia ended in a tense shouting match with protesters as it approached a statue of Robert E. Lee in Richmond.

As the nation races toward Election Day, the tensions and acrimony surrounding an extraordinarily divisive campaign, coming on the heels of a summer of protests and racial unrest, are bleeding into everyday life and adding further uncertainty to an electoral process in which Mr. Trump has not committed to a peaceful transfer of power.

Sunday’s incidents came a day after a group of Trump supporters in Texas, driving trucks and waving Trump flags, surrounded and slowed a Biden-Harris campaign bus as it drove on Interstate 35, leading to the cancellation of two planned rallies. The F.B.I. confirmed on Sunday that it was investigating the incident.

But there are reasons to doubt that the confrontation was the fault of Trump supporters.

Law enforcement authorities are increasingly worried, too -- not just about what they have already seen, but also about what has been threatened, especially online.

Most of the internet threats have not migrated to the nation’s streets, according to a senior law enforcement official who has reviewed Homeland Security Department bulletins and warnings as well as online activity from instigators on the political right and left. But law enforcement officials fear that online posts by instigators could materialize into violent acts.

Immediately after that paragraph came this, as if there was some clear connection between "violent acts" and temporarily slowing traffic:

Trump supporters mounted a motorcade across the New York City region on Sunday, waving flags and cheering for the president while clogging traffic on key arteries.

The supporters were spotted crossing the Mario M. Cuomo Bridge over the Hudson River in the city’s northern suburbs and bringing the busy Garden State Parkway in New Jersey at least partly to a standstill. Officials in New Jersey told a local newspaper that the motorcade stopped near the Cheesequake Service Area -- about 30 miles outside New York City -- and “backed traffic up for about five miles.”

Groups that monitor voting have been preparing for intimidation at the polls at least since September, when protesters disrupted voters at a polling location in Fairfax, Va.

(The Times also overreacted to that September flag-waving “disruption” during early voting in Virginia.)

The paper’s fear and loathing over political activists blocking traffic is selective. They didn’t mind when leftists like Occupy Wall Street did so, and didn’t bring up a word of criticism during the multiple instances of blocking highway traffic that accompanied racial protests this summer.

Mr. Miller deflected questions about the highway disruptions by Trump supporters, saying he was “more concerned with downtown Washington businesses having to board up their windows in anticipation of lawless, violent Biden supporters rioting and looting on Tuesday night.” There was nothing to suggest that would happen.