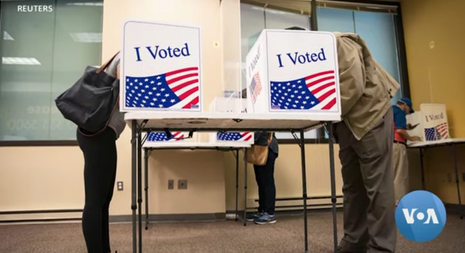 Surely the Times would agree that anti-Semitism is evil and also agree that there’s too much of it in the BLM movement?

A radio host claimed a BLM co-founded practiced “brujería,” or witchcraft. It was not enough for the Times to roll its eyes at such talk radio guff -- it had to condemn it as capital-R “racism” meant to drive an electoral wedge between Latinos and blacks.

By repeating the racist tropes on the radio, Ms. [Carines] Moncada spread it beyond her 45,000 Twitter followers and into South Florida’s mainstream broadcast media, a worrying circle of misinformation targeting Latino voters in the nation’s biggest presidential battleground state.

Meanwhile, conservatives were villains and liberals were hand-wringing.

But the outright disinformation -- the deliberate spreading of falsehoods -- is coming almost exclusively from conservatives, researchers say, including from a crop of right-wing Spanish-language websites that are designed to look like nonpartisan news outlets. Liberal activists and experts have struggled to keep up with an accurate response, in part because of language barriers and because so much has been spread in private, closed groups.

Luckily (?), a liberal media nonprofit has teamed up with two liberal Spanish networks to fight such right-wing lies, er, opinion:

Last month, the media nonprofit Poynter Institute announced a collective that included the Telemundo and Univision networks to combat misinformation on the messaging platform WhatsApp.

Relatedly, tech reporter Kevin Roose made Sunday’s front page with a hit piece on the Falun Gong-associated newspaper The Epoch Times, “How an Obscure Newspaper Became a Bullhorn for the Far Right.” Roose even seemed irked by the paper’s opposition to Communist China.

To top it off, Tiffany Hsu’s story in Monday’s Business section smeared popular mainstream conservative media outlets to discredit their reporting in the week before Election Day: “False Voter Fraud Stories Are Churning on Conservative News Sites.” Yes, the paper that brought you nonstop Russia-gate is accusing other outlets of phony stories.

In the final stretch of the 2020 campaign, right-leaning news sites with millions of readers have published dozens of false or misleading headlines and articles that effectively back unsubstantiated claims by President Trump and his allies that mail-in ballots threaten the integrity of the election.

With evasive wordplay, Tsu over-"weighed" the import of isolated headlines to hint that these are conspiratorial conservative outlets not to be trusted:

The Washington Examiner, Breitbart News, The Gateway Pundit and The Washington Times are among the sites that have posted articles with headlines giving weight to the conspiracy theory that voter fraud is rampant and could swing the election to the left, a theory that has been repeatedly debunked by data.

Tsu gathered up scattered stories to make her ideological point.

Another right-wing site, Daily Wire, posted a Sept. 24 article about ballots in Pennsylvania under the headline “FEDS: Military Ballots Discarded in ‘Troubling’ Discovery. All Opened Ballots were Cast for Trump.” Headlines on the same issue in The Washington Times were similar: “Feds investigating discarded mail-in ballots cast for Trump in Pennsylvania” and “FBI downplays election fraud as suspected ballot issues found in Pennsylvania, Texas.” A Washington Times opinion piece on the matter had the headline “Trump ballots in trash, oh my.”

Several days after the reports, neither Daily Wire nor The Washington Times appeared to follow up with articles on the announcement from Pennsylvania’s elections chief that the discarded ballots were a “bad error” by a seasonal contractor, not “intentional fraud.” Mr. Trump cited the discarded Pennsylvania ballots several times as an example of fraud, including in last month’s presidential debate.

Wait: How does what Pennsylvania’s election chief said contradict those headlines, none of which actually read “intentional fraud,” despite how a quick reading of Tsu’s story would imply? And isn’t this “bad error” pretty disturbing in itself, no matter the intent?

Incidentally, if NewsBusters devoted itself to all the bad stories the Times has printed but never taken back, nothing else would ever get done.

The paper has long worked overtime to debunk any hint of problems with mail-in voting (never mind its own reporting and that of other liberal outlets).