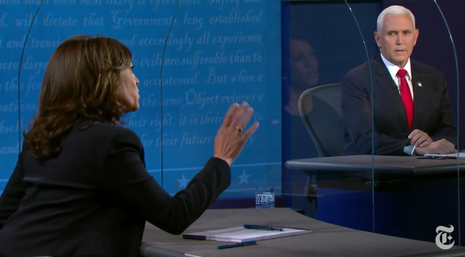 The New York Times’ coverage of the 2020 vice-presidential debate between Mike Pence and Kamala Harris was almost as slanted as CNN and MSNBC’s, complete with a full story on “fly”-gate and accusations of mansplaining by Pence against Harris.

Vice President Mike Pence approached his task on Wednesday as he has approached his four years as the executive straight man to an unruly leader: not merely defending President Trump but effectively insisting, with poker-faced conviction, that those who doubt his boss should not believe their eyes and ears.

Alexander Burns and Jonathan Martin filed “In Clash on Virus, Harris Puts Pence on the Defensive,” and that’s what the two reporters attempted to do as well:

Vice President Mike Pence and Senator Kamala Harris clashed over the Trump administration’s handling of the coronavirus pandemic on Wednesday night, with Mr. Pence defending the White House’s record without addressing its fundamental failures, while Ms. Harris accused him and President Trump of presiding over a catastrophic failure in public-health policy….As Ms. Harris attacked Mr. Trump, the vice president sought to recast Mr. Trump’s record on the pandemic and other issues in conventional and inoffensive terms, often in plain defiance of the facts.

The vice president made misleading or plainly false claims about White House policies on a range of subjects weighing down Mr. Trump in the presidential race….

There was even a full story on the fly that landed on Mike Pence’s silvery mane during the debate. Reporter Reid Epstein used the nit to get in some nitpicking against Pence.

While Mr. Pence spent most of the 90-minute debate avoiding direct questions posed by the moderator, Susan Page of USA Today, the fly brought up a slew of questions of its own.

The nytimes.com debate “live stream” Wednesday night provided multiple unfair cracks at the vice president, as a sample of the subheads demonstrates:

* “Mike Pence changed the subject nearly every time he was asked a tough question.”

It was the first time a woman of color had ever appeared on a presidential or vice-presidential general election debate stage, and the tightrope Senator Kamala Harris had to walk was never far from sight.
Just consider the reaction in the Republican pollster Frank Luntz’s focus group of undecided voters:

“She is applauded for her knowledge,” Mr. Luntz wrote on Twitter, “but they just don’t like her ‘condescending reactions.’”

That some voters would view Ms. Harris’s reactions as condescending, and recoil at them -- the laughs, head shakes and “are you kidding me” expressions she displayed at various points in response to Vice President Mike Pence -- was not surprising. Nor was the lack of comparable backlash to Mr. Pence’s head shakes and unamused expressions.

Research shows that voters see certain behavior as assertive or authoritative when it comes from men but aggressive or condescending when it comes from women. The double standard is more severe for women of color, and the specific criticism lodged against Ms. Harris has both racial and gendered components.

* In “‘I’m speaking’ becomes a viral moment for Harris, and a new catchphrase for merchandise,” reporter Tiffany Hsu also tried hard to make the ho-hum debate crosstalk a feminist issue:

Minutes after that, the phrase was all over merchandise being sold on the online marketplace Etsy. Variations of it showed up on T-shirts, mugs, face masks and laptop decals.

An hour into the debate, Ms. Harris repeated the reprimand. The comments began trending on Twitter and incited a flurry of reaction.

“I hope every little girl heard that,” the actress Uzo Aduba wrote.