New York Times reporter Kevin Roose, eternally hypersensitive to the dangers of the right-wing on the internet, elevated some brief online scuttlebutt about an alleged Biden debate “earpiece” into a full-blown history that mostly mocked the right: “The Long History of ‘Hidden Earpiece’ Conspiracy Theories.” But one of the left-leaning conspiracists could be found very close to home.

Ahead of Tuesday’s presidential debate, rumors began spreading among right-wing influencers and Trump campaign surrogates that Joseph R. Biden Jr., the Democratic nominee, was being outfitted with a hidden earpiece in order to receive surreptitious help during the debate, and that Mr. Biden’s campaign had refused a request from the Trump campaign to allow a third party to inspect both candidates’ ears for hidden earpiece receivers before the debate.

….
….the theory is being speculated about in right-wing media, including on Fox News, and it has been shared thousands of times on Facebook….

“Secret earpiece” rumors are nothing new. In fact, they’ve become something of a fixture during presidential debate cycles, and part of a baseless conspiracy theory that tends to rear its head every four years.

The first real earpiece conspiracy theory dates to 2000, when Rush Limbaugh, the right-wing radio host, accused then-candidate Al Gore of getting answers fed to him through an earpiece during a “Meet the Press” appearance….

Then came the tricky bit:

Four years later, during the 2004 presidential debates, rumors circulated among left-wing bloggers that George W. Bush was getting help from a surreptitiously placed earpiece….Commentators on the left speculated about a “bulge” in Mr. Bush's jacket, which they imagined concealed a hidden receiver into which Karl Rove, the former president’s political adviser, was speaking. The Bush campaign tried to bat down the rumors, but they persisted, even though no solid evidence ever surfaced…. 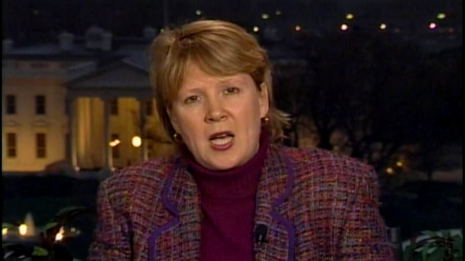 “Commentators on the left” is not specific enough! It includes the paper's own former White House correspondent Elizabeth Bumiller, who circulated the exact same conspiracy theory back during those 2004 debates. She also “persisted” in spreading the rumors.

Bumiller, now Washington Bureau chief for the paper, passed along left-wing conspiracy theories herself about George W. Bush’s debate performance against Democratic opponent Sen. John Kerry, supposedly given advice from Karl Rove via a radio receiver that bulged out of the back of Bush’s jacket on stage.

Bumiller’s most loving and respectful treatment of the wacky left-wing theory appeared in the October 19, 2004 edition under the headline “Talk of Bubble Leads to Battle Over Bulge.” Note the tone Bumiller tries to convey of a desperate President Bush clinging to office (Bush would best Kerry on Election Day two weeks later).

In these closing weeks of the presidential campaign, the talk at an edgy White House is of polls, turnout, swing voters and polls. There are also two story lines from the presidential debates that to the exasperation of President Bush's advisers won't go away: the bubble and the bulge.

The bulge -- the strange rectangular box visible between the president's shoulder blades in the first debate -- has set off so much frenzied speculation on the Internet that it has become what literary critics call an objective correlative, or an object that evokes large emotions and ideas.

The bulge is in many ways related to the bubble, which is the word Mr. Bush himself uses to describe the isolation of the presidency. In this case, Mr. Bush's critics argue that he has so walled himself off from dissent in his bubble that he was ill-prepared to take on the challenge of Senator John Kerry in their three debates. 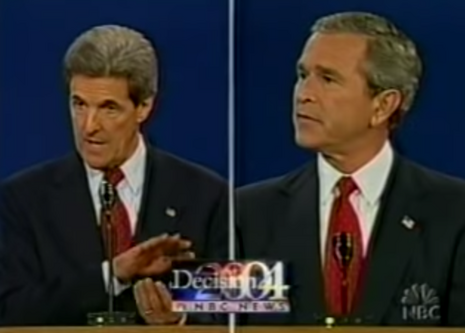 The next paragraph in particular sounds like Bumiller is fully embracing the nuttery:

Therefore, Mr. Bush had to make use of the bulge, which is most popularly rumored to be a radio receiver that transmitted answers from an offstage adviser into a hidden presidential earpiece. In the last two weeks, the bulge has taken on a life of its own to become a symbol to Mr. Bush's critics of all that is wrong with his presidency.