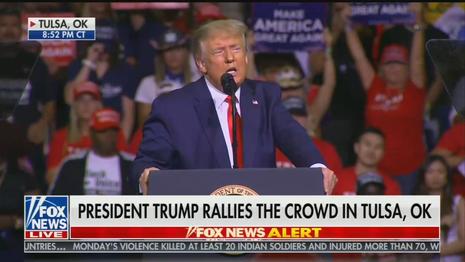 The press, after ignoring health concerns during the massive George Floyd protests, are conveniently worried again about people gathering in groups...unless they were celebrating Juneteenth.

And now, as the nation grapples with the dual menaces of racism and a relentless virus, the once-rhetorical questions of Trump-branded risk management have given way to fine-print legal disclaimers about what might happen if people listen to him.

On Saturday, Mr. Trump is scheduled to rally at a packed indoor arena in Tulsa, Okla. Many health authorities say it is a terrible idea. And what attendees have to lose, the campaign claims, is any right to hold the host responsible.

“By clicking register below,” reads a message on the Trump 2020 website, directed at those planning to be there, “you are acknowledging that an inherent risk of exposure to COVID-19 exists in any public place where people are present. By attending the Rally, you and any guests voluntarily assume all risks related to exposure to COVID-19.”

As an encapsulation of the Trumpian worldview, some former associates say, there is perhaps no beating “guests voluntarily assume all risks.”

Health officials say his impulse to play down the severity of the virus threat earlier this year informed the federal government’s haphazard response. His personal disdain for mask-wearing as a risk-mitigation measure amounts to a public safety hazard, according to medical experts, who worry about the signal it sends to his fans.

(The paper's idols at the World Health Organization didn't accede to public mask wearing until June 5. Is W.H.O also a "public safety hazard"?)

As the Tulsa rally came together Saturday, reporters Katie Glueck and Astead Herndon filed a social distancing lecture disguised as a news report: “Waiting for Trump: Hats, Flags, Little Fear of the Virus.”

And still, they came.

....A number of Trump backers, while expressing support for peaceful protesters, also argued that if the nation countenanced demonstrators congregating in large crowds, then they should be free to participate in the president’s rally without criticism -- though public health experts have said that large indoor gatherings are more dangerous than outdoor events.

That didn’t stop the press from condemning much smaller outdoor anti-lockdown protests in Michigan.

Few of those lined up to see Mr. Trump seemed concerned about maintaining significant distances from one another. People jammed up next to each other in line on Saturday, where cheering, chatting and the occasional cough took place in proximity to fellow attendees.

Also in Saturday's paper, the Times celebrated thousands protesting for black lives on Friday in "Juneteenth" celebrations. A collection of photos -- with text by Audra Burch -- never mentioned the coronavirus, including the caption: "The One Race: March on Atlanta kicked off at Centennial Olympic Park at 9 a.m., with thousands of people showing up to march for Black lives and justice in America." Was there significant distancing in this photo? 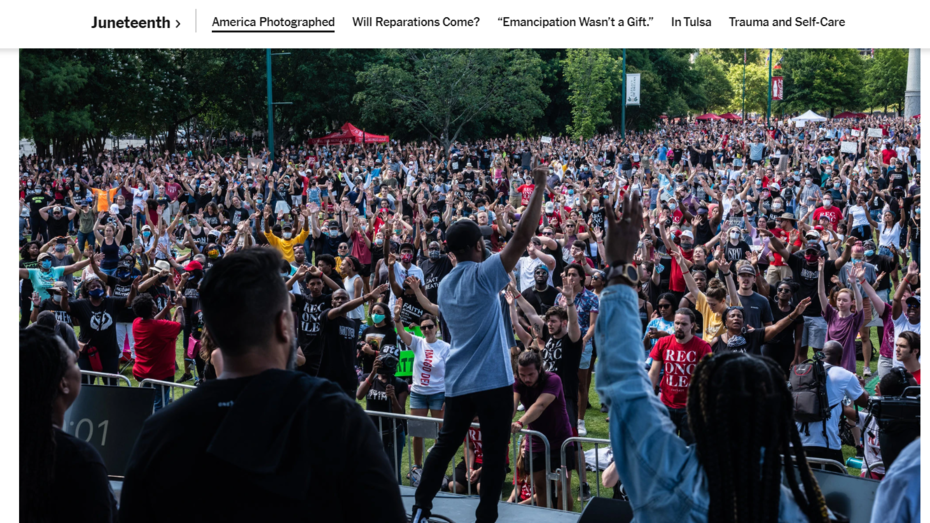