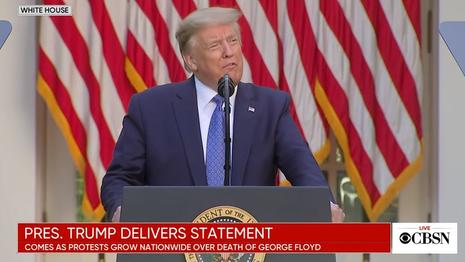 Wednesday’s New York Times featured another labored attack on President Trump by White House correspondent Peter Baker. In a half-page “White House Memo,” Baker accused Trump of hypocrisy in “The ‘Law and Order’ President, but Not Close to Home.” He laundered the left-wing talking point that Trump doesn’t support all law enforcement, such as the intelligence services that went after him during the elaborate nothing-burger known as “Russia-gate.”

This is not the kind of language Baker applied to Bill Clinton.

Mr. Trump is the “president of law and order,” as he calls himself, except when it comes to himself or his friends. He has little patience for criticism of law enforcement, unless it is his....

The seemingly contradictory messages come as the nation is debating the proper role of law enforcement in the United States after the killing of George Floyd....

Trump’s own bout with unfair prosecutions is dismissed.

Trump had a point about unfair prosecutions, which Baker refuses to grant him.

He has complained of people close to him being set up and or pressured by law enforcement. He focused intensely on due process violations like the warrants obtained by the F.B.I. to surveil his onetime campaign adviser Carter Page that were later found to be deeply flawed....

Wouldn’t you want a president with concerns about “due process violations”? Baker also hand-waved away disturbing instances of excessive acts taken against Trump associates.

....When his friend Roger J. Stone Jr. was arrested in a pre-dawn raid carried out by more than two dozen police officers, Mr. Trump complained that “Border Coyotes, Drug Dealers and Human Traffickers are treated better.”

Baker calls Trump hypocritical for being “a wholehearted supporter of the ‘stop and frisk’ policy once employed by New York police officers disproportionately against young Hispanic and African-American men.” Yet the gut fear of gun crime resonates quite differently from the abstract fear someone with high connections is making illicit gains. Baker refuses to disentangle those two different strands of “law and order.”

“But he is entirely forgiving of white-collar crime,” Mr. Bromwich added, “especially when it affects wealthy, privileged people like himself, his friends and colleagues, or people who committed crimes to advance his political interests.”

Bromwich isn’t just “a former Justice Department inspector general” but an Obama staffer who worked on Christine Blasey Ford’s team against Brett Kavanaugh and was the lawyer for former FBI Deputy Director Andrew McCabe, who violated Department of Justice policy by talking to the media.