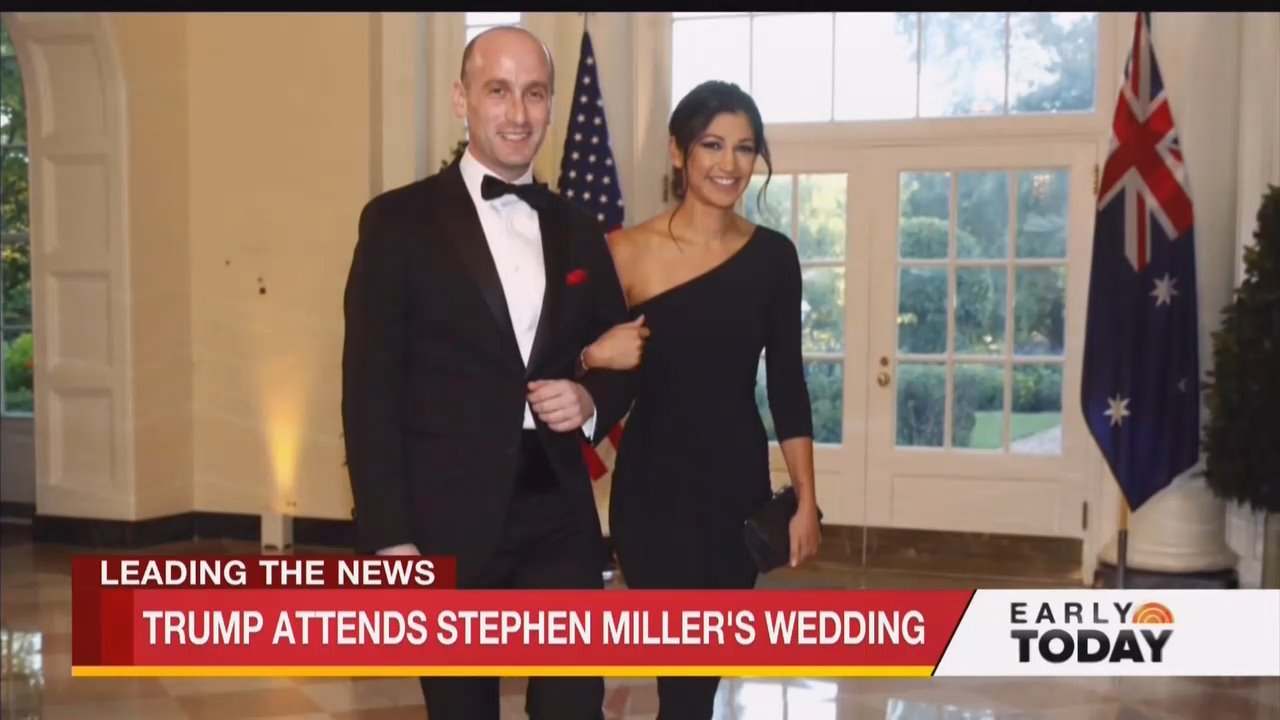 That strange insensitive headline begs a question Rogers doesn’t directly answer: Why are Trump staffers trapped in the “bunker” in the first place?

To make her case that the Trump administration is responsible for political polarization in Washington, D.C. (not a recent phenomenon) Rogers ignores the left-wing groups and outraged individual lefties mobbing Trump staff (including Miller himself, whose very existence she admitted made for "angry confrontations") and Trump supporters as they go about their lives in the city and its environs. Protesters even gathered outside Miller's condominium complex to protest his immigration stance.

Stephen Miller and Katie Waldman, who met while he was developing the administration’s restrictive immigration policies and she was working as a spokeswoman for the Department of Homeland Security, were married at President Trump’s hotel on Sunday evening.

The wedding details, shared in increments by the bride to reporters over the past few months, illustrate what it meant for one notorious Trump aide to get married in a heavily Democratic town where the mere sight of him is known to create angry confrontations.

Rogers hinted that D.C. denizens (Hillary Clinton won the district by 87 percentage points) don’t want to associate with conservatives. But Rogers cast no accusations of intolerance their way, instead suggesting Miller & Co. were more to blame.

But the scene reflected what has been an uncomfortable truth for young aides since the beginning of the administration: Washington’s highly politicized culture -- a reality that the president and zealous officials like Mr. Miller have directly contributed to -- can be brutal on dating life....

Aides in this White House have isolated themselves along with Mr. Trump. They tend to retreat into their own homes for socializing or to the safety of the president’s properties....

Technology has also made it harder for the willing to date outside their political tribe, even if they wanted to: App-based dating platforms, including OkCupid and Bumble, have started allowing users to filter out one another based on personal politics.

According to data released by OkCupid — whose recent ad campaign includes slogans like “It’s OK to choose Mr. Right based on how far he leans left” — anti-Trump mentions on user profiles have increased by more than 52 percent since 2017.

There was more blame placed upon Trump for creating polarization, with no focus on the hostility of a Democratic-dominated government town reacting petulantly, sometimes violently, to Trump invaders in their midst. There's no memory of CBS joking about Miller's head on a pike.

Julie Spira, a dating coach and author of Love in the Age of Trump: How Politics Is Polarizing Relationships, said politics has become the “No. 1 deal breaker” for singles, with many holding Mr. Trump responsible for cleaving a wider cultural divide. The president and his supporters counter by blaming the news media.

Rogers is billed by the paper as a White House correspondent “covering the cultural impact of the Trump administration on the nation's capital and beyond,” which she uses as cover for her hostile coverage. She penned a bizarrely petulant story on Trump in June 2019: “Trump’s Celebration of L.G.B.T. Rights Is Met With Criticism.”