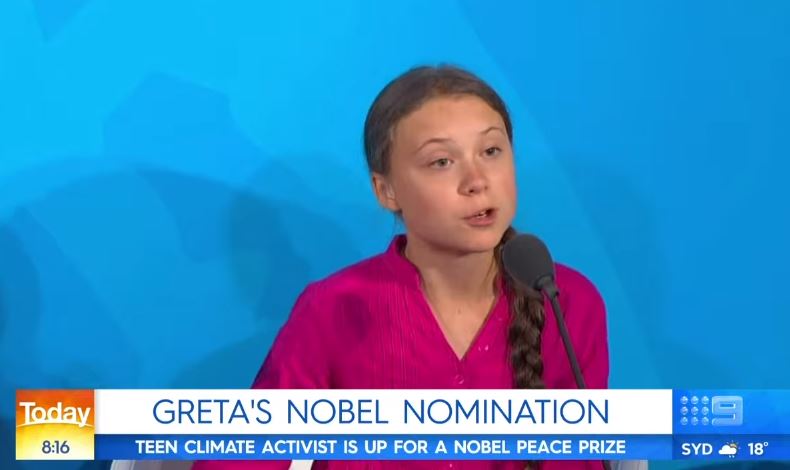 Newsweek reporter Rosie McCall offered a conspiracy theory as to how a 16-year-old environmental activist somehow failed to win the Nobel Peace Prize this year: “Greta Thunberg Snubbed for Nobel Peace Prize by Committee Run by Norway, One of the World's Biggest Oil and Natural Gas Exporters.”

This new theory comes courtesy of a magazine fresh off breaking the news that opening tanning salons in urban neighborhoods were a plot to give gay men skin cancer, or something.

The Nobel Committee has surprised oddsmakers by not picking 16-year-old Greta Thunberg to win the 2019 Nobel Peace Prize.

The five-member Norwegian panel instead announced on Friday that Ethiopian Prime Minister Abiy Ahmed had won the award, "for his efforts to achieve peace and international cooperation, and for in particular his decisive initiative to resolve the border conflict with neighboring Eritrea," a statement said.

Thunberg has become the figurehead of the youth climate movement after skipping school to protest outside the Swedish Parliament in August 2018, inspiring the waves of student strikes that followed.

Over the last year, she has (among other things) led a Global Climate Strike spanning 150 countries, graced the cover of Time Magazine as a 'Next Generation Leader' and sailed across the Atlantic Ocean in a yacht to speak to lawmakers in Washington and New York.

One of those countries is the nation that effectively decides who wins the Nobel Peace Prize each year -- Norway, where the five members selected to serve on the committee are chosen by the Norwegian parliament. The country has a complex relationship with greenhouse gas-emitting fossil fuels, which historically have been (and arguably continues to be) a major source of Norway's wealth.

McCall gave Norway some credit for weaning itself off the fossil fuels poison and moving to reduce its emissions, but of course it wasn't good enough:

Pete Erickson, a senior scientist at the Stockholm Environment Institute, who co-wrote a 2017 report highlighting the stark difference between Norway's climate goals and their investment in the fossil sector, says these actions are not enough.

Thunberg herself may not have wanted a prize for her contribution to the climate change movement but for many, Norway's decision to give the award to a climate activist would have been an important symbolic gesture.

"We could all do more," said Webber. "But, Norway, is more aggressive with their shift to a post-oil world than every other major oil-exporting country.

Choosing Thunberg to be this year's winner of the Nobel Peace prize would have been "a handy symbolism to match their actions," he added.

Such speculation amounts to an insult of the actual Nobel Prize winner, Abiy Ahmed, the prime minister of Ethiopia, who restarted peace talks with neighboring Eritrea and beginning restoring freedoms in Ethiopia. He helped stop a war, but was barely mentioned by McCall. A European teenager who performed some angry End Times-style rants was more deserving, in the eyes of the journalists at Newsweek.

McCall's idea that Norway would be hostile to environmental radicalism also slides by the fact that Al Gore shared the prize in 2007 for his environmentalist prophesizing. That fact dilutes the conspiracy theory of the prize being under control of Big Oil.