Reporter Michael Wines hyperventilated again over gerrymandering by Republicans in Wisconsin, in Thursday’s New York Times: “Push to End Partisan Maps Is Held Up by the Map Makers.”

He led off with strong language about how liberals find it "dangerous to democracy." 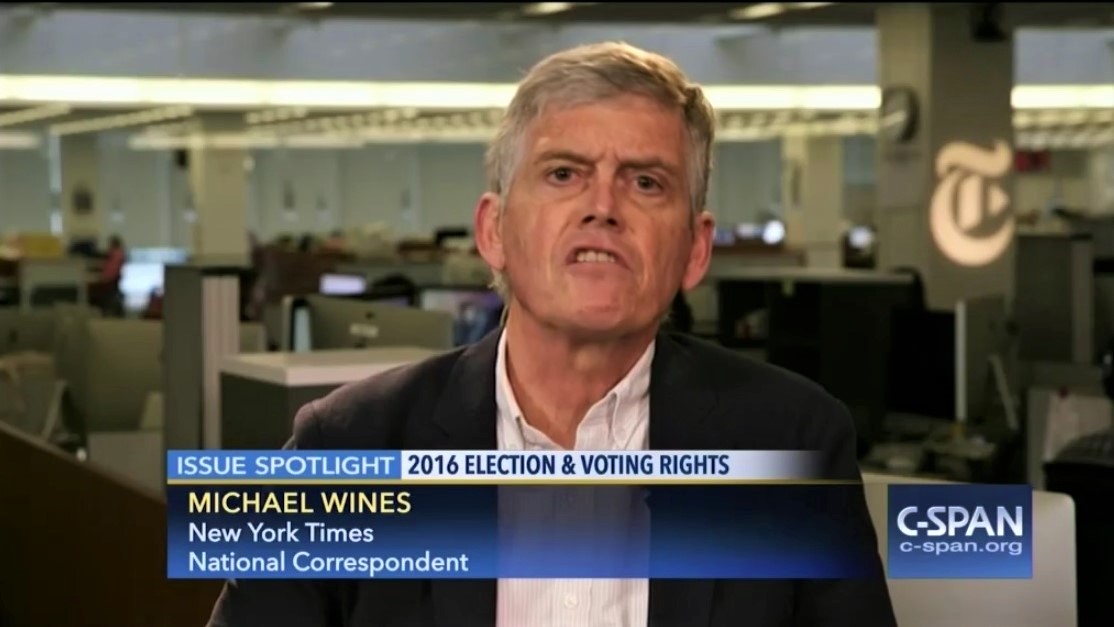 When the Supreme Court concluded this summer that it had no authority to strike down partisan political maps, no matter how outrageous, Chief Justice John G. Roberts offered solace to those who call the maps dangerous to democracy. Maybe federal judges cannot outlaw gerrymanders, he wrote in the court’s majority opinion. But voters surely could.

Here in Lincoln County, a fir-carpeted swath of rural northern Wisconsin, that is starting to look like no simple task.

In March 2017, the county board of supervisors passed a resolution urging the state to create a nonpartisan panel to take over mapmaking from politicians in the State Legislature. That kick-started a movement that has now seen 47 of Wisconsin’s 72 counties -- representing three-fourths of the population -- issue similar resolutions. Atop that, voters in eight counties, including Lincoln, have overwhelmingly endorsed nonpartisan mapmaking in referendum votes.

That is striking, because many of those counties, including Lincoln, are Republican bastions in a state where Republicans have so deftly filleted the state legislative map that a Democratic landslide in November barely dinged their dominance.

But two and one-half years of grass-roots appeals have hardly budged the Republican majority in the State Legislature that rigged the state’s political maps to begin with.

A bill to create a nonpartisan panel, introduced in June, has drawn only four of the State Assembly’s 64 Republicans as co-sponsors. An identical bill in the State Senate has no Republican backers at all.

The reason is obvious, said Kenneth Mayer, a University of Wisconsin political scientist and an expert on gerrymandered maps: Nonbinding referendums and resolutions -- even those with overwhelming public support -- are the equivalent of Nerf guns in a political battle that demands heavy artillery.

At least this time around Wines remembered that Democrats are no slouches in partisan gerrymandering (the Times just didn’t care as much), while emphasizing that it's “by far” Republicans who are standing in the way of true democracy.

Some measure of gerrymandering has traditionally been practiced by both parties; in Maryland and Illinois, for example, Democratic majorities have ignored or rejected pleas to take politics out of map-drawing. But by far the greatest resistance to fair maps has come from Republicans, who mounted a wildly successful campaign in 2010 to control the statehouses across the country that draw political districts. Since then, the party has embraced gerrymanders, some of them so extreme that they effectively consign opponents to permanent minority status.

If Republican gerrymandering is so effective, it's a wonder that Democrats on the congressional level managed to win back Congress in 2018.

In the large number of states where ballot initiatives are not allowed, changing legislators’ minds, suing them or voting them out of office are the only ways to rein in partisan maps. And in the wake of the Supreme Court’s decision, legislators have even less incentive to surrender their redistricting power -- particularly the power to draw congressional maps -- unless legislators elsewhere do the same and create new momentum among voters.

No state epitomizes the potential roadblocks more than Wisconsin, where the electorate is all but equally split between the left and right, but the Legislature has remained lopsidedly Republican since the last political maps were drawn in 2011..

Earlier this summer, Wines also blamed everything about gerrymandering on Republicans, while giving those poor beleaguered Democrats an excuse to do the same:

The decision will almost certainly force Democrats, who control 14 statehouses, to reconsider their belated crusade against gerrymandered maps and begin drawing their own -- an eat-or-be-eaten response to Republican success in gaming the redistricting process....Mr. Levitsky and others say partisanship -- the conviction that the other party is an enemy that must be crushed -- is the driving force behind such tactics. He and other scholars say the Republican Party has embraced rule-breaking as a political tactic...the Republicans’ flouting of the rule book is already prompting Democratic talk of similarly tough tactics like packing the Supreme Court....

What "rule book" is this? Besides the pro-Democratic one issued every morning by the New York Times?